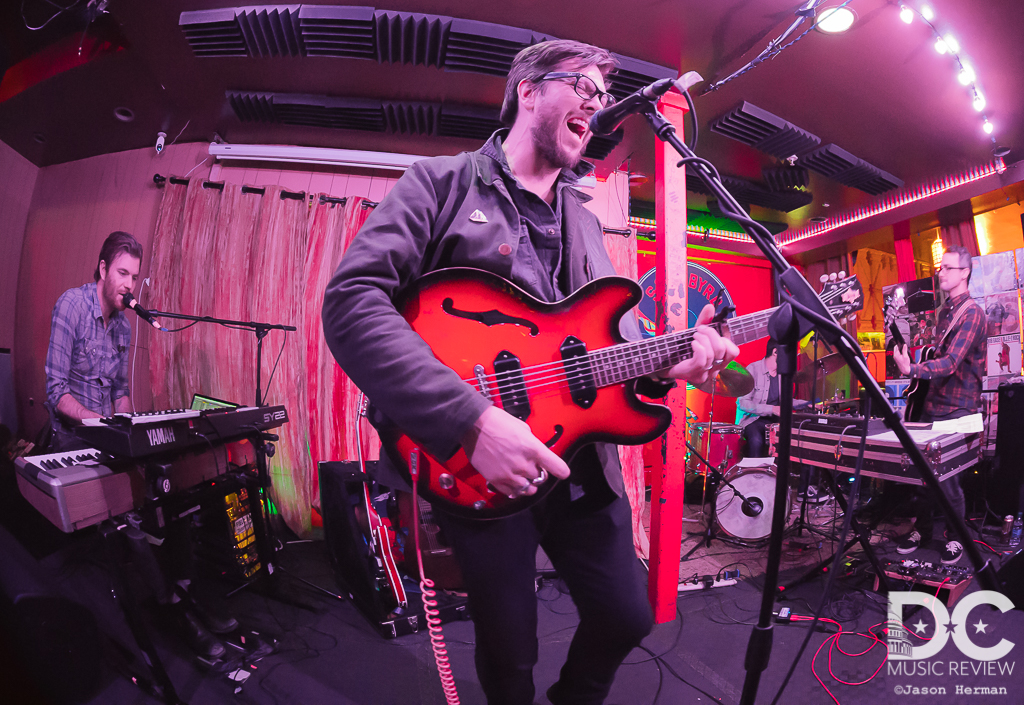 Christopher Porterfield (lead vocals, guitar) is the voice and power behind the chilling and brilliant musical experience, Field Report. Drawing a loyal fan base from the DMV, Porterfield welcomed the crowd with a sultry greeting, adding that he was “really glad to be here,” before kicking off the night with “Healing Machine.” The few who took seats in the pews lining the walls quickly stood and squeezed themselves into the crowd, gently pushing forward toward stage once Field Report came out. Those in attendance were a polite and enthusiastic audience, applauding and cheering at the start and close of each song. Playing with Devin Drobka (drums, fiddle, banjo, backing vocals), Thomas Wincek (guitar, keyboards, backing vocals), and Barry Clark (bass), Friday night’s performance was their first appearance at Songbyrd.

The artistically designed and grungy basement venue was the perfect spot for Field Report and their opening band, Campdogzz, whose live sound was First Aid Kit meets Sharon Van Etten. Jess Price’s vocals led the band in a romantic and soulful setlist.

“Michelle” was a highlight of the night. With lyrics like poetry, and a live rendition that sounded like a more folksy The Cure, Porterfield sang with a such a concentrated passion that despite performing in front of 100+ people, it was clear he had zoned into his own musical universe. In the same vein, concertgoers let the music wash over them and consume their beings. Field Report drew in a romantically inclined crowd, with couples swaying intimately to the slower tracks.

With instruments that shared similarities in sound with those utilized by Justin Vernon — such as a gentle, yet masterful guitar strum, as well as mystical sounding chimes and bells —Porterfield’s vocals were reminiscent of a folksy Glen Hansard, as well as David Gray and even Eddie Vedder at times. Around halfway through his set, Porterfield checked in with the crowd to make sure everyone was enjoying themselves. Although he modestly said that he was “a little out of shape” and “out of rhythm,” the Wisconsin native performed with such skill and precision, it was hard to pull your eyes away. It is clear that Field Report care deeply about their fans, as Porterfield called out to the crowd, saying that unless anyone had requests, they’d continue playing off “the teleprompter.” Fans shouted out their favorites, much to the band’s delight. The happiness was reciprocated by the audience, as Field Report played fan favorites, including “Fergus Falls,” during which one man excitedly whispered to his girlfriend, “this is it!” when the opening notes rang out.

The band played a wide range of songs, with those on the setlist being more upbeat (or at least played in such a manner), and those that were taken as requests being slower and more intimate. However, after a few fan requests, the catchy, yet extremely well made “Never Look Back,” brought the pace back up. With chimes, bells, and synth programming sprinkled throughout the chorus, the upbeat track would be a perfect addition to your summer road trip playlist. Although the beat creates the illusion that “Never Look Back” is an uplifting track, a closer look shows that there may be deeper undertones: “Forgiveness does not excuse/It just prevents all of the others from destroying you/Never turn around and look back.” And that’s part of Field Report’s mastery — the ability to craft thought-provoking and relatable lyrics and insert them into a rhythm that forces the listener to pay attention in order to get the full impact of the music. Although the band can be enjoyed as an easy and relaxed listen, Field Report are best consumed with full attention and intent. Christopher Porterfield contemplates and answers questions from his fans.

Throughout the night, Porterfield had excellent and light-hearted banter with the crowd, even asking the audience, “Does anyone have any questions?” When one person questioned how his daughter was, Porterfield launched into a proud ramble about his one and a half year old. You could hear the happiness in his voice as he talked about her and how much he missed her after being away for 13 days. Porterfield’s rapport with his fans depicted him as a supremely good human being, on top of being a talented musician.

The band closed out the night with “Everything I Need,” saying that it would be their final track, making sure to emphasize that they weren’t going to do the whole “will they won’t they” do an encore shtick. Closing the night on a positive note, Porterfield said, “be encouraged, take heart, we’re gonna get through this.”

Field Report are not to be missed, as Porterfield’s passion comes through in every song, every note, and in every scratch and crack of his voice.

Click here to see the setlist for Field Report's performance at Songbyrd on April 6, 2018 1. Song 8 & 9 were reserved for fan favorites requested from audience by Christopher Porterfield.