Galactic Funks Up 9:30 Club with DC’s Own AZTEC SUN 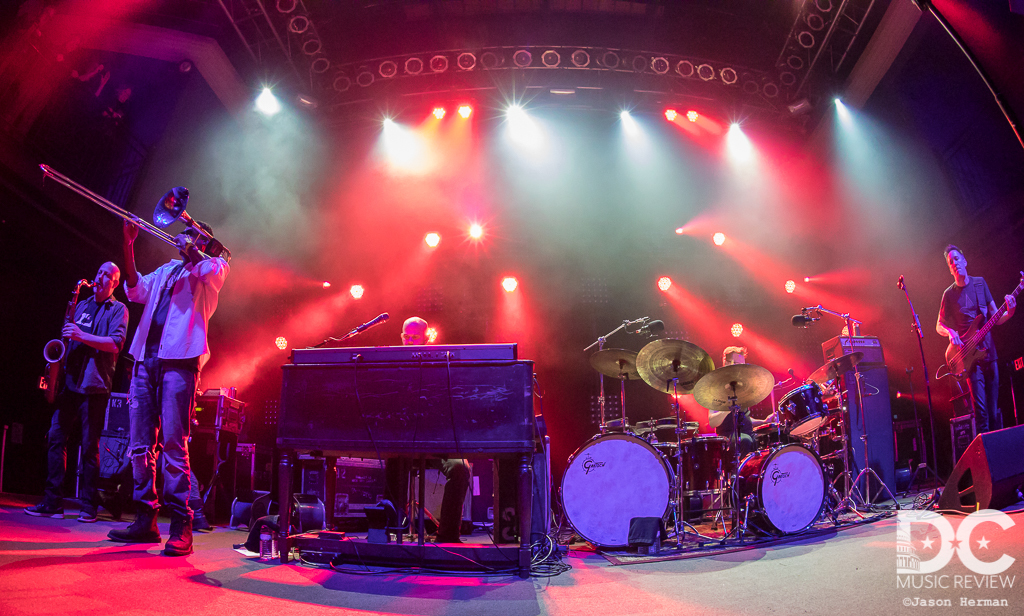 If you’re unfamiliar with AZTEC SUN, the self-described “funk with soul” band that has been performing in the District for five years, be sure to correct that immediately. In their first performance at DC’s historic nightclub, the band converted more than a few Galactic fans who should be seeing AZTEC SUN play venues around Washington for years to come. Be on the lookout for their debut full-length album later this year, recorded and produced by Alan Evans of Soulive!  AZTEC SUN is a local band on the rise and we hope they’ll be back at 9:30 Club soon.

The DC natives raised the crowd’s energy early in the evening with lead singer Stephane Detchou noting that “our job is to make sure you’re all ready for Galactic” and that their “music for your hip region” would get the crowd limber and ready to go. The band’s 45-minute set featured elements of funk, soul, acid jazz, and Latin music with the call and response of a Go-Go show. AZTEC SUN certainly knew how to work the crowd with their synchronized dance moves, lyrics inspired by the trials and tribulations of the DC Metro’s red line, and sections for audience participation, making them a perfect act to set the table for a raucous dance party to follow. Galactic kicked off their set with the instrumental “Karate,” a tune that packs a punch with the commanding trombone of Corey Henry. Vocalist Erica Falls joined the band for the next three songs, including “Higher and Higher” off the band’s most recent release, Into the Deep. Falls’s outstanding voice and vibrant stage presence provides another dimension for the band that helped create some of the most enjoyable moments of the show.

Falls left the stage as the band worked its way through Charles Wright’s 1968 tune “65 Bars and a Taste of Soul.” The highlight of the show came in a four song run about 45 minutes into the set, beginning with the title track from Galactic’s 2007 album, From the Corner to the Block, which prominently featured collaborations with rappers and hip-hop artists. Corey Henry filled in for Juvenile on vocals, engaging the crowd in more call and response and kicking the show into high gear. After Erica Falls returned to the stage for “Right On,” the band surprised the crowd with a funky and soulful rendition of Bob Dylan’s “Like a Rolling Stone,” with Falls providing a powerful and exquisite vocal performance. This is a must-hear cover. A medley of three original songs from their debut album, Coolin’ Off, offered an opportunity to showcase the band’s local roots. With two of its founding members, bassist Robert Mercurio and guitarist Jeff Raines, hailing from the DC suburbs in Chevy Chase, MD, a Galactic show at 9:30 Club without playing “Go Go” could barely be considered a Galactic show at all. Fortunately, the band treated the crowd to Stanton Moore’s driving drum beat and the playful organ groove that pay tribute to DC’s special sort of funk. “Go Go” segued beautifully into “Funky Bird” and its jam on Dizzy Gillespie’s jazz standard “Manteca” to close out the meatiest portion of the set.

Galactic then returned to the traditional New Orleans sound of “Ooh Nah Nay,” and gave Mercurio and Moore each some extended time for a solo before inviting Erica Falls out for two additional songs to close out the set. An encore of the instrumental “Cineramoscope” and “Going Down Slowly” with Falls served as the exclamation point at the end of one funky evening!

The band seemed to really feed off the crowd’s energy, tweeting out their appreciation to their DC fans the next day.

Thank you DC and the @930Club - always the best

Thanks to Galactic’s crew, the staff at 9:30 Club, and AZTEC SUN for allowing DC Music Review to live stream both of these outstanding sets of music. Be sure to check out our Livestream page for many more recordings and webcasts to come!

Click here to see the setlist (and photo) for Galactics's performance at the 9:30 Club

6. Out in the Street

9. From the Corner to the Block

15. Does it Make a Difference

Click here to see the setlist (and photo) for AZTEC SUN's performance at the 9:30 Club

3. In The Name of Everyone

For more information on AZTEC SUN, visit their Facebook page or webpage.

For more information on Galactic, visit their Facebook page or webpage.