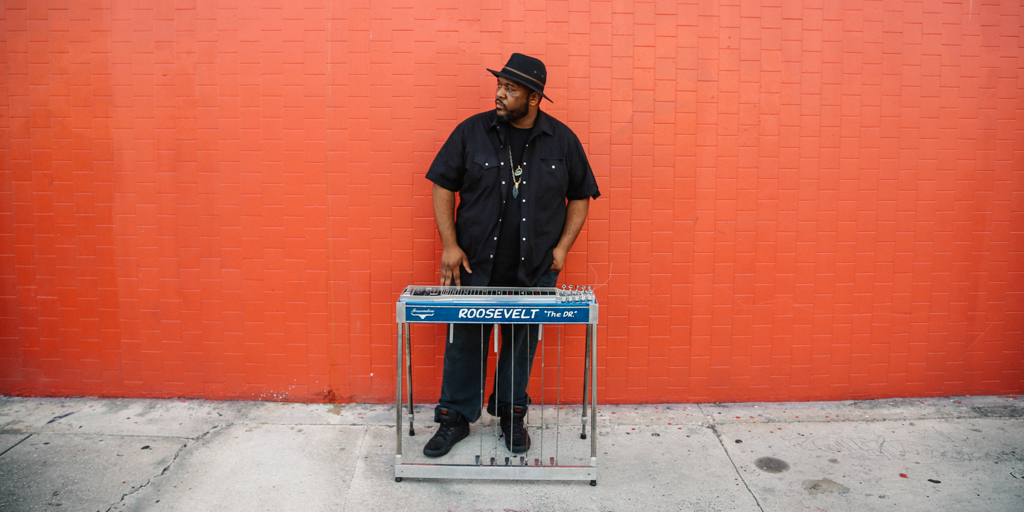 Roosevelt Collier, affectionately penned “The Dr.,” has built up his reputation as a master of the pedal steel guitar. The Florida native has played alongside legends such as the Allman Brothers, the Funky Meters, and Los Lobos, among others. After years of jamming, the Dr. himself has released his very own debut album, Exit 16.

Comprised of seven unique and intricate tracks, Exit 16 is a powerhouse of an album, taking listeners on a epic rollercoaster of a journey. Tracks vary from medium to fast paced, but one constant throughout is excellent musicianship, with Collier (pedal steel and lap steel guitars), Jason JT Thomas (drums), Michael League (bass), and Bobby Sparks (organ and clarinet) working their magic. I was hooked from the very first notes of “Sun Up Sun Down,” as they reminded me of the soundtrack from the 1977 film Suspiria, scored by Goblin. However, the similarities end there, with the track spiraling into an upbeat, groovy jam session. The first track is a warm and easy welcome into an album that evokes a myriad of emotions. It’s steady and smooth, with a beat that repeats. However, the track continuously builds, with more sounds and urgency added as the song goes on.

When “Happy Feet” kicks off, the pedal steel quickly cues in the drums and begins a fast paced and upbeat song. With the pedal steel squealing in excitement, it really feels as though these instruments are alive, weaving in and out of each other to create the expert sound that Collier has championed. Sometimes instrumental music is key for concentration, but when listening to this track, I had to pause it, for concentrating on anything but the music is an impossible feat.

Further down the track listing, the titular track “Exit 16” leads off with a mysterious repeated note that cues in the remainder of the instruments. Although the tune leads off with hints of funk, the remainder of the jam feels heavier and more pressing, as though trying to convey something important. This falls in line with the notion that this album takes inspiration from Collier’s life. He told Live for Live Music that the album, and consequently this track, are named as such because exit 16 is “literally” where he’s from — “off the turnpike.” As a result, this track and this album are close to his heart, and you can feel the passion in every note.

“Spike” closes out the album, leading off with a rock ’n roll style feedback sound. This track is grungy, edgier than the others. Collier’s ability to make tracks like “Happy Feet” and “Spike” feel so cohesive in the same narrative is a nod to his brilliant talent.

Listening to Roosevelt Collier’s album, I felt my heartbeat accelerate to a very questionable rate, especially for someone sitting in the office on a coffee-less morning. Whether it was due to an unexplained excitement or an urge to move in time with the beat, or some combination of the two, I cannot say. However, what I do know for sure is that Collier plays with such an urgency and passion that this album will leave you breathless.

Each track has its own distinct personality, yet they fit together so cohesively. Perhaps it is the reigning voice of the pedal steel, or perhaps the masterful playing of the musicians. Either way, Exit 16 tells an exciting story bound to stick with you in the coming days. 1. That Could've Been Bad

Check out the Official Music Video from Roosevelt Collier's album Exit 16. This video should give you a small taste of what you can expect on the album.