Grand opening of The Anthem at The Wharf with Foo Fighters – Washington, DC 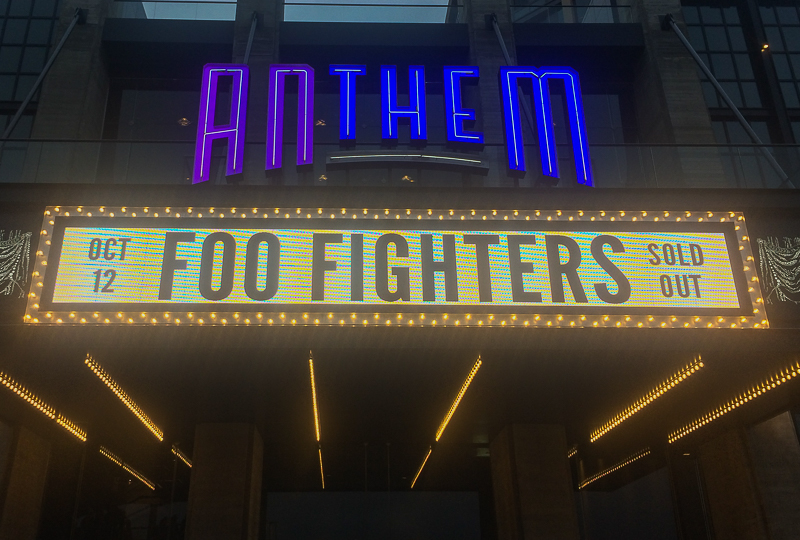 Music lovers were treated to a special and very energetic night at The Anthem's opening night at The Wharf in Washington, D.C.   The Anthem stands proudly over newly revitalized Southwest Waterfront.  and the brainchild of Seth Hurwitz, of I.M.P. and co-owner of Washington DC's legendary 9:30 Club.

As lines formed to each side of The Anthem, the crowd was treated to an all out fireworks display put on by The Wharf to celebrate opening night.  Fans eagerly walked into the venue opening night, only having experienced the venue through soft opening video and newspaper articles.  Some fans immediately hurriedly for the best seat in this new venue while others explored the new venue in it's entirety.

At 7:00pm, DC's own legendary Go-Go band, Trouble Funk, took the stage, paying homage and keeping alive a musical style that is Washington, D.C.'s very own.  Trouble Funk and the Go-Go music heavily influenced many residents in and around Washington, D.C. in the decades that they have existed, including Springfield, Virginia's own Dave Grohl.

Seth Hurwitz welcomed the audience "Welcome to The Anthem! I've been waiting a long time to say that!", and introduced tonights supporting act The Struts by telling a story "I told Dave when they were playing the 9:30 Club that I think The Struts should Open for you and Dave said 'F*ck Yeah!'"   With that the lights went down and The Struts, from Derby England,  hit the stage.  A 1970's inspired rock and roll act heavily influenced by Queen and Aerosmith, The Struts were a perfect opening act for the Foo Fighters.  As their set continued, the energy of the room began to steadily grow.

A 9:30pm Dave Grohl and the Foo Fighters hit the stage, and DC's prodigal son returned home to open DC's newest and  biggest club.  Grohl yelled to the delight of the sold out crowd, "It's going to be a long night mother*ckers! I got a lot of songs to play!  You want to break this sh*t in!?!"

Throughout evening Grohl took in the venue's opening and playing for his hometown, running over every square inch of the stage while other band members kept to their "Foo Formation" stage positions  and  Taylor Hawkins perched above the band with his massive drum kit looking down upon the band and  audience like a smiling golden rock god.

Grohl continued his interaction with the audience by talking about growing up and listening to local radio stations including WABA-AM, DC 101 and WHFS.  "Now I get to come home and play Rock & Roll for you!" Several songs later, with a smile on his face, Grohl asks "How are you?  What do you think of this place? Thank you for letting us play this super place!" before launching into yet another Foo Fighter classic.  All the while Grohl would make sure to not only interact with audience members directly beneath him, but run to the sides of the stage to make sure every single person around the stage felt special, and also interacted with the audience members clinging to the box seats on each level of the three story venue.

After more than an hour of playing Grohl announced to the audience one of his concerns, "Here's the problem.  We have a lot of f*cking songs!  I asked Seth [Hurwitz] earlier what is the curfew for this place and he said there is no curfew! So it's going to be a long night!" Of course Grohl's dilemma was greeted by the defending roar and approval of the audience.

Into the long night, it was not until nearly a quarter after 11pm that Grohl introduced his fellow band members; Chris Shifflet on lead guitar,  Nate Mendell on bass who surprised Grohl with a tease of "Waiting Room" by legendary DC post-punk band Fugazi; Pat Smear on rhythm guitar who teased a Queen's "Another One Bites The Dust"; Rami Jaffee on keyboards, and Taylor Hawkins on drums who led the audience through a fun Freddy Mercury Day-O vocal improvisation.

Late into the evening Seth Hurwitz at the bequest of Grohl showed off his music chops behind the drum kit as Hawkins sang lead on Rolling Stones classic "Bitch".

The Foo Fighters closed out the night with their signature closer "Everlong" and soon after audience members spilled into the promenade of The Wharf.  If there was ever a way to open up a new marquee venue and complex, it is safe to say that tonights lineup delivered and everyone knew it.

1. Put Your Hands Up

2. The Times Are Changing

7. Could Have Been Me

8. Where Did She Go (with crowd sing-off leading into song)

4. The Sky Is A Neighborhoot