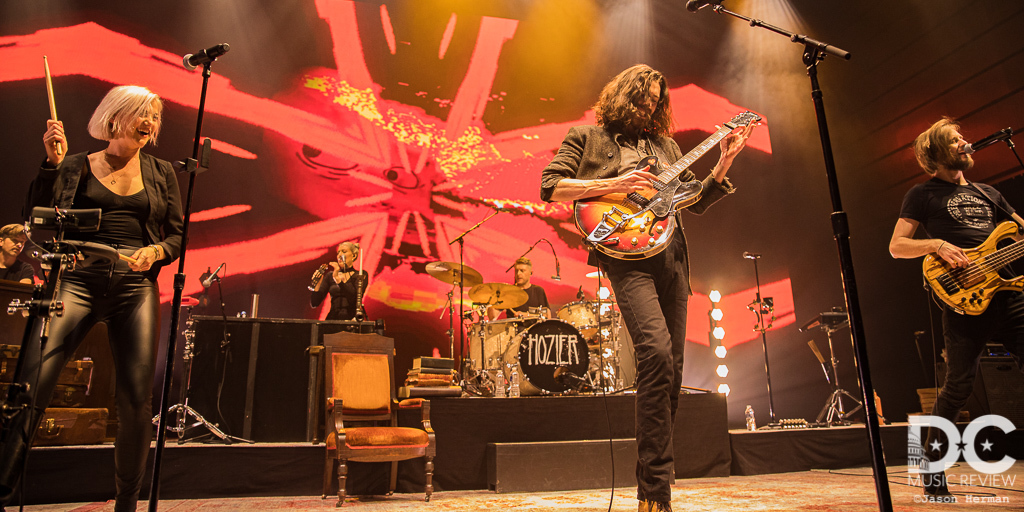 On November 18, The Anthem in Washington, DC played host to one of the most highly regarded acts in popular music — Hozier. This "Wasteland, Baby!" tour performance has been eagerly anticipated, and the concert has been sold out for months.

As audience members entered the venue, small encampments of fans sat together on the floor, or held their place along the rail in anticipation of the night’s electrifying performance.

Before Hozier took the stage, the audience met up-and-coming Australian singer-songwriter Angie McMahon. McMahon's profoundly rich and mesmerizing vocals were the perfect warm-up for the night of music that was yet to come.

Angie McMahon Makes Her Debut At The Anthem
Read More Hozier is widely known for the hit single “Take Me to Church” from his debut album, and he is adored for his breathtaking vocals, guitar work, and stage presence. Looking at the stage, it was as though you could peer into Hozier’s soul. The stage embodied him — an Irish poet and philosopher — decorated with luggage, an antique globe, and an acoustic guitar resting comfortably on a cozy chair. It gave the feel of an intimate performance in his living room, rather than the expansive 6,500 person venue on the DC Waterfront.

As Hozier's performance began, he approached his cherished acoustic guitar and performed "As It Was" from his new album Wasteland, Baby! Softly, slowly, and powerfully, Hozier, bathed in blue and red lights, welcomed the crowd to his musical living room for the evening. Following this delicate opening number, Hozier and his band transitioned into the powerful tracks off his latest album, including "Dinner & Diatribes," "Nina Cried Power," and then finally into a ferocious barn-burner "To Be Alone." With the energy of a sold-out crowd, Hozier and his audience emphatically sang the chorus of this blues-inspired powerhouse, "...it feels good, girl, it feels good. Oh, to be alone with you!"

Besides the obvious power of Hozier's performance, it was hard to not notice the masterful multi-media production backing him.  Throughout the evening lyrics and vignettes would accompany the songs.  This production solidified the connection between the artist and the audience and added power to the lyrics, such as in “Nina Cried Power,” when the projected images provided a fantastic ode to the power of music to connect people, effect change, and ignite movements for justice.  Hozier's performance and the production elements that accompanied it were like a transdermal patch to your musical soul, providing powerful, soul-penetrating bliss.

Hozier is an artist that has totally absorbed his musical inspirations and makes a point of paying homage to them. One cannot help but notice "Moment's Silence (Common Tongue)" blues, and gospel inspirations, "Jackie and Wilson" embody his deep love of blues and jazz.  For good measure, he threw in a brief, knock-out performance of “Living for the City” by Stevie Wonder.  Hozier paid homage to those influences as the legends of music appeared behind him, including the name of Duke Ellington, among others.  Beneath Hozier's incredible talent is a profound intellect that navigates his musical influences and social causes, bringing them to the forefront of his music. That sultry raw talent of Hozier was on full display tonight

That sultry raw talent of Hozier was on full display tonight

Throughout the performance those in attendance were treated to the raw sultry talent of Hozier as waves of emotion and cheers rose and resonated throughout the venue.  Hozier began “From Eden” with what sounded like the opening notes to The Beatles’ classic “In My Life.”  In moments like these, it wasn’t too hard to note the timelessness of music and the emotions it evokes.  After making the smooth transition into “From Eden,” the emotions we hold dear in “in My Life” still remained and we were left with the stray thought that in the years to come, we know that there will be times and places where we will always associate with our memories of Hozier. Throughout the evening, Hozier shared rich anecdotes and observations covering a myriad of topics.  Where else than a poet's living room would you hear anecdotes of astrophysics, being told that this is the springtime of the universe, not to sweat the small things, and other delightful musings?

Although Hozier is the focal point of the performance, his band acts as one cohesive unit, providing the power behind the artist.  Hozier's band included Emily Kohavi, who played traditional Irish fiddle influence over the blues-inspired tunes.  Hozier was quick to point out the stellar performances of his entire band, including DMV native Rachel Beauregard, who hails from Haymarket, Virginia. Hozier's performance ended with the megahit, "Take Me To Church," which was accompanied by a heavenly video depicting the frail and triumphant human condition of loving for the sake of love.  The power and beauty of the song's production made your heart truly explode and seek salvation in the words of the song.  That is precisely when Hozier descended the steps of the stage and went into the audience before reemerging a few seconds later draped with two pride flags.  One cannot help but fall in love with Hozier, if not for his music, then his humanity and impassioned quest to lend his voice to the people and causes surrounding us all.  As the band left the stage, the flags remained proudly draped in Hozier's living room. When Hozier and his band came back on stage for the encore, the stage was drenched in red for "Cherry Wine."  As Hozier stood, set apart from his band, with two lone downlights illuminating him for a profoundly intoxicating production of this song, many would have been satisfied with such a powerful ending to the evening, but Hozier had other plans.  The evening would, in fact, end with an over the top version of "Work Song" with opener Angie McMahon joining Hozier as these two powerhouse vocalists exchanged musical vows with one another to bring the show to an outstanding conclusion.

With a second full-length album under his belt and a transfixing stage presence, we wait with bated breath for Hozier's next appearance in the DMV.  It is quite easy to say that if you have not seen Hozier yet, you should make it a priority to see him live on his next visit to the region.

Click here to see the setlist for Hozier's  performance at The Anthem on November 18, 2019 Click to purchase Wateland, Baby! and more from Hozier's Webstore

Hozier has his very own podcast, Cry Power Podcast. To learn more please use the following web resources: