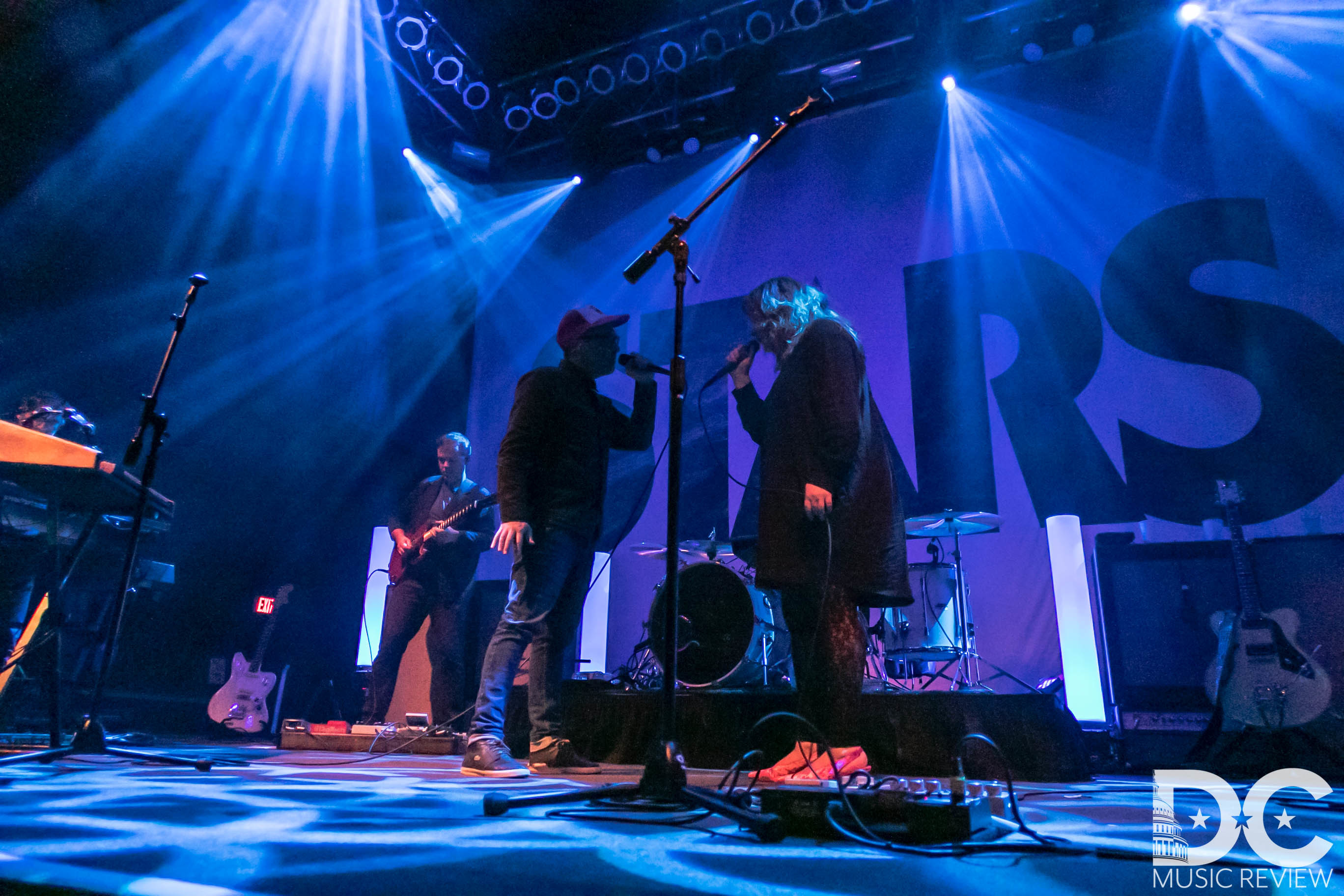 “Losing to You” kicked off the setlist. The upbeat song was characterized by Campbell and Millan’s harmonious vocals that both contrasted and complimented the other's perfectly. Their chemistry, which comes across very potently on record, is just as tangible on stage. The pair often sang to each other, bodies and toes pointed toward the other, as though edging to intertwine. However, the band as a whole also had an obvious cohesiveness and connection that enhanced the overall performance.

They quickly transitioned into “Wasted Daylight,” which has since become one of my top Stars songs. Millan’s breathy vocals atop soaring instrumentals created an upbeat tune that is a great addition to any upcoming summer playlist. Only two songs deep into their setlist, Stars set the tone for the night with fast-paced and energetic tunes that got the audience moving.

Each band member had their own signature dance move that made their performance look like beautifully organized chaos, with each corner of the stage decorated in a different fluid motion. Campbell in particular had a flare for dramatics, stiffly and intentionally flailing his arms as though stretching to the corners of the room to embrace everyone in it. His flamboyant movements were eye catching and contagious, with members of the audience trying their best to imitate him. Stars attracted an eclectic group that cannot be singularly categorized, reinforcing the idea that their music touches on universal emotions of love and loss that are not restricted to an age, but are rather felt by all.

Though one particular fan did stand out. Standing at the very front, the twentysomething greeted each song intro with an enthusiastic jump, and the occasional fist pump. He managed to enjoy each song and dance manically, while still recording each track. However, if he hadn’t had such a good time at the show itself, I imagine he’d be quite dismayed by the shaky quality of video memorabilia.

In addition to numerous twenty and thirtysomethings, children and older folks were scattered throughout the audience, and the band noticed. About halfway through their set, Campbell and Millan took to the front of the stage to address their fans. Campbell said, “I see young people, people who are here with their kids, people I’ve known since they were kids.” Millan tacked on, “We’re playing this show for you!”

Stars attracted an eclectic group that cannot be singularly categorized, reinforcing the idea that their music touches on universal emotions of love and loss that are not restricted to an age, but are rather felt by all. Click To Tweet

After playing “Hold On When You Get Love and Let Go When You Give It," Stars invited a small girl on stage, asking her, “How does it feel to be the coolest nine-year-old in Washington, District of Columbia?” before clearing a spot on stage for her and her mother to sit for the duration of the show so the girl didn’t get “smushed.” Everyone in attendance was pleasant and courteous, beginning with opening act Dan Mangan who treated the crowd to complicated lyrics atop simple guitar chords, decorated with self-deprecating humor. The artist, also from Canada, felt the music with his entire being. As he belted high notes, his head, chest, and heels lifted, as though a marionette was tugging at his heartstrings. After his rousing opening performance highlighted by songs such as “Jeopardy” and “Robots,” Mangan lingered in the upper balcony, snapping photos and singing along to Stars’s music.

The haunting opening of fan favorite “Your Ex-Lover is Dead” garnered rousing cheers from the crowd. Campbell brought out a melodica keyboard instrument — a device that has the look of a keyboard, but the sound of a harmonica — to cue in the familiar opening notes. Toward the end of the track, Campbell stepped away from the mic and gestured out to the crowd for them to help finish the lyrics with him. Hearing hundreds of voices melded together chanting on a loop, “Live through this/And you won’t look back,” was chilling, and dredged up some personal nostalgia. Although those feelings were tinged with sadness, I was also in awe at the unity in the room, and was comforted by the universally shared feelings of love and loss, and how music can help heal old wounds.

Stars put on a moving and one-of-a-kind show. It’s not unique in the graphics or flashy lights, but in the content of their art. Their lyrics are honest, relatable, and thought-provoking. Click To Tweet

“Trap Door” brought up the tempo and the drama of the night, with Campbell closing out the song by flinging himself backwards onto the ground, while still belting haunting high notes. Often he would crouch at the front of the stage and stare intently into the audience, as though trying to familiarize himself with each member in attendance. The band played a three-song encore, with “Dead Hearts” standing out as a tribute to Duke Ellington, “the greatest Washingtonian ever” according to Campbell. The haunting tune features a back-and-forth between Campbell and Millan, where they look back on the past and the ghosts that drifted through their lives. Although there is speculation about the meaning of the song, it moves me in the same way as “Your Ex Lover is Dead.” Perhaps because I associate the song with my own ex-lover, or perhaps because I first discovered it in the 2011 romantic-indie film Like Crazy, “Dead Hearts” is a beautifully bittersweet walk down memory lane.

Stars put on a moving and one-of-a-kind show. It’s not unique in the graphics or flashy lights, but in the content of their art. Their lyrics are honest, relatable, and thought-provoking. Their latest album There Is No Love In Fluorescent Light showcases the growth Stars has had as a band over the past 20 years, incorporating elements of both their vintage and more modern sounds. Stars care deeply about their fans, and that aspect enhances their performance to remarkable levels.

5. The Theory of Relativity

9. Hold On When You Get Love and Let Go When You Give It