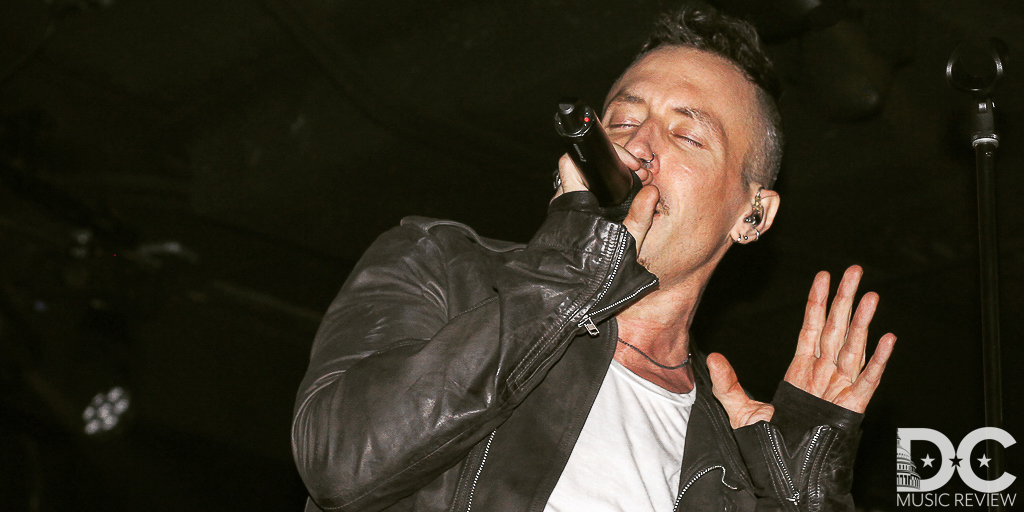 After an opening set featuring the synth-pop sounds of KANGA, the New York industrial act Uniform shifted the mood of the room to a decidedly darker tone.   Raw, distorted tones, compliments of guitarist Ben Greenberg, lashed the audience, accompanied by the steady pulse of bass synthesizers and the frantic, shouting vocal delivery of front man Michael Berdan.  The band, now in its sixth year, recently expanded their line up to include a third member, drummer Greg Fox, who also appears on their latest studio album, The Long Walk, released in August 2018 (due to scheduling conflicts, Mike Sharp is filling in on drums for this tour).  This addition serves to up the intensity of the band’s performances, a prospect that seemed impossible even when Berdan and Greenberg relied on a drum machine for their rhythm section. Berdan appeared adequately frenzied and disturbed, pacing across the stage and climbing atop monitors to stare down audience members, or sometimes just directly into the projector that illuminated the stage in suitably unsettling imagery.  Greenberg and Fox were locked in tight with each other to provide the sonic backdrop for Berdan’s strained voice.  The guys have appeared to come more into their own each time they have played in Washington, DC, and this set proved to be no exception. Steve Alexander of The Black Queen

Steve Alexander of The Black Queen

After the hectic Uniform set, the stage was set for headliners The Black Queen, the members of which are from a variety of different musical backgrounds.  Guitarist Steve Alexander has put in time as a guitar tech for well-known acts such as Nine Inch Nails and A Perfect Circle.  Synth player Josh Eustis’s credentials include serving as a touring member for Nine Inch Nails and Puscifer, as well as being the creative force behind Telefon Tel Aviv, a project that has pulled him away from this current tour, with Justin McGrath filling in his space in the lineup. Greg Puciato of The Black Queen

Greg Puciato of The Black Queen

Which brings us to the most curious member of the group, lead vocalist Greg Puciato.  Most widely known as the front man of now-defunct The Dillinger Escape Plan, Puciato’s vocal range consists of high-pitched croons and guttural screams that have always been combined with a performance style of unparalleled intensity and an outspokenness that has brewed much controversy over the years.  How was a man known for such brashness going to translate to a comparatively calm synth-pop act?

Of course, Puciato is many things, but he is first and foremost a professional, so the transition was seamless.  The intensity of his past act was only slightly hinted at within the first few seconds of taking the stage, when he drained the remnants of a cocktail and tossed the plastic cup and ice cubes into the crowd.  From there, it was all pumping shoulders and pleasant serenades as the front man danced with the mic stand to the synth and guitar work of McGrath and Alexander, even taking up an axe himself later in the set, which included cuts from their 2016 album Fever Daydream and 2018’s Infinite Games.

While the evening’s lineup did not necessarily offer something for everyone, it offered a lot of the specific things that the fans of these styles were seeking that night.