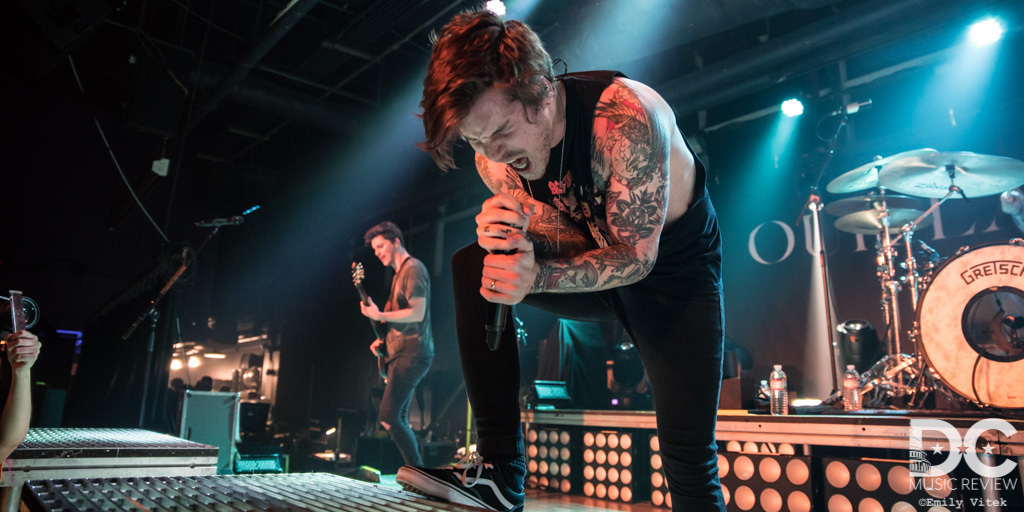 Three hours before doors opened, a line of fans eagerly congregated outside Baltimore Soundstage on Tuesday early awaiting pop-punk State Champ’s sold out performance that evening. Many of the young adults, decked out in the band’s merchandise, shared stories and photos from the performance two days prior in Philadelphia. Long before the bands took the stage, the pent-up excitement showed that it was going to be a night to remember. The New York pop-punk band is no stranger to Soundstage, having played the venue four times within the past three years alone. Most recently, State Champs stopped in Baltimore for their “Living Proof Tour” bringing along Our Last Night, Grayscale, and Maryland-natives The Dangerous Summer. After the release of their third studio album Living Proof back in June 2018, State Champs embarked on a UK and European tour that fall. Now back in the States, vocalist Derek DiScanio, guitarists Tyler Szalkowski and Tony Diaz, bassist Ryan Graham, and drummer Evan Ambrosio are hitting up some of the top cities in North America. The new 13-track album includes fan favorites such as “Criminal” and “Dead and Gone”, and has been a success so far with #9 Top Current Albums, #28 Top 200 and #3 Rock Billboard charting positions. Philly natives Grayscale opened up the night and quickly got the crowd riled up with their pop-punk hits such as “Atlantic”, “Beautiful Things”, and “Palette”. The Philadelphia area has kept pop punk and alternative scene alive for years, generating bands such as The Starting Line, Circa Survive, The Wonder Years, Balance and Composure, and Modern Baseball. It won’t be long before Grayscale rises to fame and books their own headlining tour.

Next up were hometown heroes The Dangerous Summer, who originated from Ellicott City just a few miles outside Baltimore. Back in the mid to late 2000s when Maryland pop-punk was in its prime, their songs “The Permanent Rain” and “Where I Want to Be” were on iPods everywhere. In addition to their throwback songs, The Dangerous Summer also played their newest hit “Where Were You When The Sky Opened Up” which was released a few weeks prior. The Dangerous Summer’s set brought on a wave of nostalgia reminiscing over days listening to pop-punk playlists filled with their songs and fellow Baltimore natives All Time Low. Shortly after, Our Last Night took the stage for their highly anticipated performance. Moving away from the pop-punk performances, Our Last Night energized the audience with their more hardcore sound. Consisting of brothers Trevor and Matt Wentworth, along with Alex Woodrow and Tim Molloy, Our Last Night rose to fame due to their YouTube covers of popular songs. Their hardcore versions of songs such as Selena Gomez’s “Back to You” and Panic! At the Disco’s “High Hopes” put a creative twist on the radio hits that would fit perfectly on a Punk Goes Pop album. In addition to their catchy cover songs, Our Last Night has been successful in creating their own music as well with five studio albums and seven EP’s. Their most recent album, Let Light Overcome, was released just a few days prior to their Baltimore show. Our Last Night opened their set with “Bury the Hatchet”, the third song off Let Light Overcome. Co-vocalists Matt and Trevor Wentworth perfectly balance singing and screaming in their songs, and their catchy lyrics quickly had fans singing along. While Grayscale and The Dangerous Summer warmed up the audience and had fans moving around, Our Last Night brought on a mosh pit and took the energy to the next level. They performed addition songs off their new album including “Demons” and “The Leap”, as well as older favorites like “Same Old War” and “Sunrise”. They pleased fans with a cover of Kendrick Lamar’s “HUMBLE” which is arguably better than the original version. Our Last Night’s incredible set left fans eager for more, and with the release of their new album, hopefully an announcement for a fall album tour is on its way.

Headliners State Champs continued the fun and opened with “Criminal”, the first song off Living Proof. As soon as DiScanio reached the microphone and started singing, crowd surfers launched into the air and made their way to the stage one right after the next. Perusing the jam-packed venue, audience members were jumping up and down and screaming along to the lyrics like their lives depended on it. State Champs have quickly grown to be one of the top players in the current Pop-Punk scene, so it is no surprise that the venue was filled to capacity even on a school night. State Champs’s set list contained the majority of Living Proof, with songs such as “Dead and Gone”, “Crystal Ball”, “Something About You” and “Mine is Gold”. During their set, State Champs invited local saxophonist Tony Hancock, also known as Saxl Rose, up on stage to perform with them. The Havre de Grace musician is best known for his saxophone covers of various pop punk and alternative songs such as Neck Deep’s “In Bloom” and Paramore’s “Ain’t it Fun”. State Champs ended the evening with an encore performance of their songs “Elevated” and “Secrets”, two songs that will always evoke happy memories of driving to Warped Tour with your best friends, windows down with music blasting. Although the Warped Tour era may have come to an end, State Champs have shown that they are here to stay. With their relatable song lyrics and immense musical talent, the five-piece band is already influencing a new wave of pop-punk for this generation.

The “Living Proof Tour” continues through the end of the month with shows in Atlanta, Denver, Anaheim, and more. If you missed their show in Baltimore, keep an eye out as it likely won’t be long before State Champs returns to the area. With many of their shows sold out this tour, it’s clear these boys are going places. Check out their newest music video for “Criminal” below and listen to Living Proof available now on their website and all major streaming platforms.

Click here to see the setlist for State Champs' performance at Baltimore Soundstage on March 12th, 2019