Jam Sandwich RVA: A Flavor for Everyone 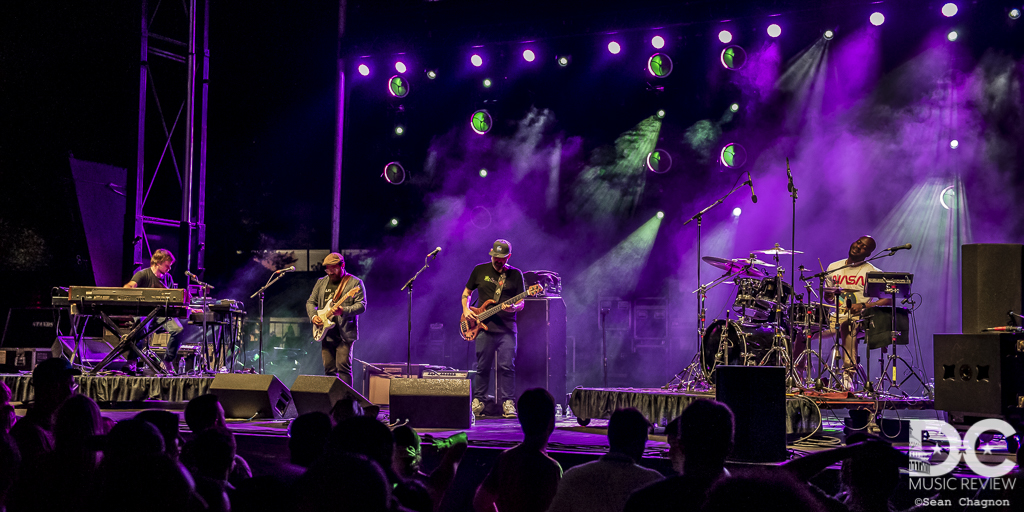 Richmond, Virginia is a bustling city with a long history. The scenic James River runs through the downtown area and in the middle of that lies Mayo Island, the home of Jam Sandwich RVA 2019. The folks at Jam Sandwich made sure attendees got a taste of Richmond and beyond with a good selection of food trucks, regional microbrews, and some delicious concoctions including RIchmond's Bell Isle Moonshine’s signature cocktail, the “Pineapple Express,” which is a delightful mix honey habanero vodka, lime and pineapple juice and perfect for a hot summer day. Even though the midday sun was a bit intense, a cool breeze blew off the river to help keep temperatures down. One thing that didn’t cool down was the talent on stage. Hometown rockers, The Folly, started the fest off in style with their eclectic mix of rock which pulls influence from countless sources. Mix a little bluegrass and swing with an old timey feel and you have Richmond’s Dharma Bombs who took the stage next. Their catchy, danceable tunes are a fun departure from much of what is seen in music these days. The next pair of bands came from a quickly growing Charleston, SC, music scene that has been sharing its wealth in Virginia recently. Little Bird changed the course for a bit with their mellow, ambient indie rock. Their tunes would easily pair well with a relaxing day on the beach or around a campfire in the woods. Charleston’s next offering, Little Stranger, is a duo who covers all instruments for their performance. With the help of loops, they lay down chill beats and rhyme over top with a hip hop style reminiscent of the Gorillas that made for an entertaining set. Once again, Richmond was represented on stage, but it was time for the locals to bring out the heavy guns. Palm Palm is J. Roddy Walston’s new project and pack one hell of a live punch. With the only recorded music being a video of them playing at a house party, they’re still relatively unknown, but that won’t last long. The fans in the audience in the know were ready to rock, and they were certainly provided the opportunity. With a sound that’s a mix of grunge and 70’s straight ahead rock, and a confident stage presence they’re doing their part to keep rock’n’roll alive. Travers Brothership kept the rock rolling with their Asheville, North Carolina funk. This incredibly talented quartet really have a mastery of their instruments. Brothers Kyle and Eric Travers cover the guitar and drums respectively with Josh Clark on bass, and Ian McIsaac on keys and percussion. These guys have been touring heavily the past couple years, including a trip across the pond, and have just released a new album which they are currently supporting with this tour. Kyle ability to rip into screaming slide solos on his Gibson SG is a sight to see and any Vulfpeck fan will truly appreciate Josh Clark’s talents on bass, as he could give Joe Dart a run for his money. Travers Brothership have a few shows around their home town prior to a stint in Colorado, before they head back to Virginia for a whopping five sets at Floydfest. To say The Stoop Kids have an amazing stage presence does not do them justice. This band brought every last ounce of NOLA party up to this festival and absolutely threw down. Throughout their set they were dancing, jumping, mock fighting, you name it…there was no shortage of flair from them. Singer Griffin Dean even ended up in the audience giving them the chance to show off their talents and even showing some of his off in the form of the worm. This band absolutely blew folks away and is a need to see group for anyone. The Vegabonds were up next with their alt-country/southern rock twang. It was a scenic set with the sun setting behind the stage and with the air cooling down rapidly, the crowd was grooving to the Nashville band’s tunes. The Rooster Walk 11 alumni had a couple RW bretheren they shared stages with in the audience and brought them up for a couple songs. Richmond local Andrew Trongone of Trongone Band joined them on stage for a rocking cover of Atlantic City and Jake Vanaman of Kendall Street Company laid down some saxophone to help them close out the set. Star Kitchen, the latest project of Marc Brownstein (Disco Biscuits), closed out the set with a jam heavy, mainly instrumental set that highlighted each of the musician’s talents. Danny Mayer (Eric Krasno Band) was ripping through solos and backing up Rob Marscher (Addison Groove Project) when he took the reins on the keys. Brownie and drummer Marlon Lewis (Lauryn Hill, John Legend) held down the rhythm throughout the set, but Marlon got to really showcase his drum talents throughout the set. He is a truly impressive to see behind the drum kit and crooned Prince’s Kiss to the crowds delight.

The folks at Jam Sandwich RVA wrangled in an eclectic and awesome group of bands that made for an awesome day. Keep your eyes peeled for next year’s event!