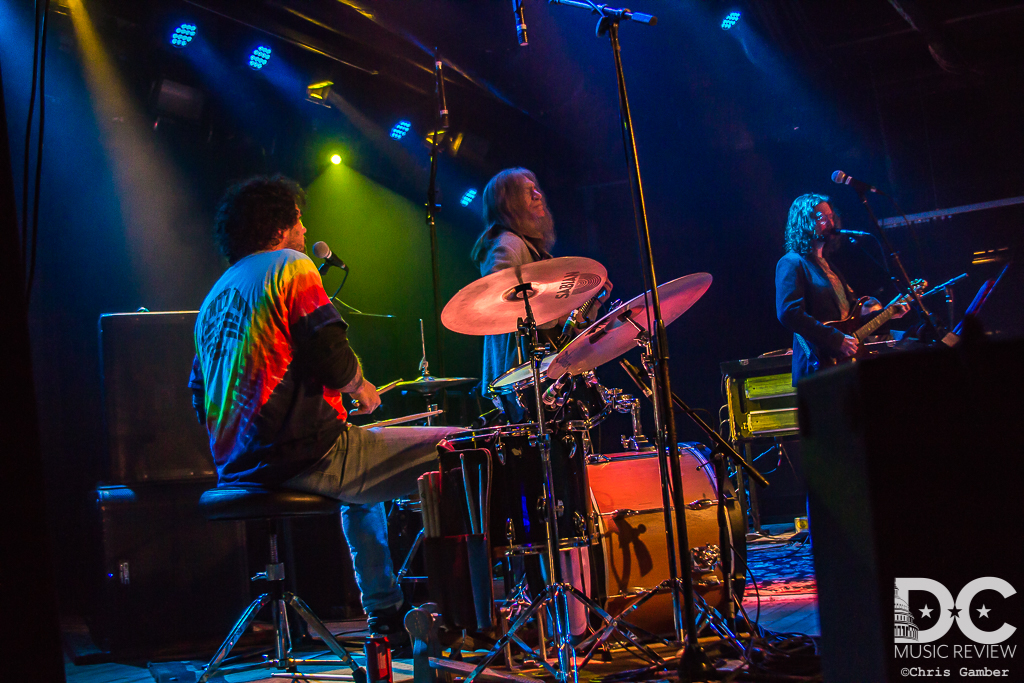 On December 28th, 2017 the John Kadlecik Band returned to Baltimore for the start of their New Year’s Eve run with another spellbinding performance. Since 2010, the John K. Band has been touring with various well-known musicians sitting in, and this particular line-up was no exception. Joined by Jay Lane of Ratdog, Furthur and Primus fame on drums, Robin Sylvester, most well-known for his contributions to the band Ratdog on bass, and Benjie Porecki (keys), who has played with such greats as Stevie Wonder and Buddy Guy among many others. This was a stellar collaboration in my humble opinion. John Kadlecik, a co-founding member of Dark Star Orchestra and member of the super group Furthur, is renowned on the scene for his ability to replicate Jerry Garcia, both vocally and instrumentally. This was proven again tonight; as always, with every single heartfelt lick that filled the Baltimore Soundstage.

From the first moment of the show, the hard-hitting guitar riffs and the organ - along with the smile that crept upon the face of the man standing next to me -proved that this show was going to be fantastic. The crowd started bopping around and the vitality immediately surfaced as the band broke into an energetic cover of the George Harrison favorite “Any Road.”

Throughout the set, the liveliness grew as we heard a mix of original songs such as “Golden Wings” and “Seen Love,” but the real standouts were the crowd-pleasing Grateful Dead and Jerry Garcia Band covers that one can literally shut their eyes during and think they are actually at a Jerry Garcia show. The first of the set was “Ramble On Rose.” As soon as the first bass line hit, the spirit of the onlookers quadrupled. The guitar and keyboard solos were some of the best I have had the pleasure to hear and the devoted fans definitely agreed. As the song came to a crescendo, every single person in the room was dancing in rhythm to the beloved song they know so well and in sync with the band. Everyone screamed out the lyrics in unison. “Goodbye Mamma and Papa, Goodbye Jack and Jill” they sang, and from that moment on, it only got better. As the song endedand it got quiet, one fan screamedout, “You’re a beast, man!” No one in this audience coulddisagree.

As the first set continued, we heard John Kadlecik magically channel Jerry Garcia both vocally and with every high octave guitar solo to accompany it during “Lazy River Road” and “So Many Roads”, which was done so beautifully that I could feel my eyes welling up with tears. This particular song was the stand- out of the night for me, due to the incendiary organ skill of Porecki. Throughout the night, he impressed me over and over again as he alternated from organ to keyboard to synthesizer. And the first set closer of “Don’tLet Go” was no exception. It was a funky version for which Porecki opted to use synthesizer keys and the spectators loved it. Everybody was bouncing around merrily, bringing an exhilarating and fulfilling first set to a close.

As the band walked back onto the stage to start the second set, the applause was loud and the fans were eager. What we subsequently heard was no disappointment to our anticipation. The set opened immensely upbeat and lively with Van Morrison’s "Alan Watts Blues" into another John Kadlecik original, “Sister Smiles” which was very reminiscent of a Phish jam. From there, the quartet burst into an implausible “Help On the Way>Slipknot” and, surprisingly to the audience, a fanciful version of The Who’s “Join Together” in lieu of the traditional fan favorite “Franklin’s Tower.” There was no disappointment with this decision, especially when the song spiraled straight into another cherished tune, “Dark Star.” Although it wasn’t a 25-minute version, it was tight and sounded superb, and it seamlessly flowed right back into “Join Together”, before exploding into “Going Down The Road Feeling Bad.” The crowd again, and not surprisingly, erupted into dance. The 50’s-esque keyboard riffs alone in this tune were so insane, it was impossible to stop boogeying, again demonstrating the versatility of Porecki. With the intensity of this song, you would have thought it would be the set closer, but there was more to come.

We next heard a Crosby & Nash tune “Page 43” that progressed into the most delightful reggae style version of the Grateful Dead classic “Ripple.” This was the second set closer and no one in the place was ready for the end. As the applause steadily filled the room, the group filed back on to the stage to play just one more tune for this devoted assembly. The encore that followed took us straight to the promised land with the Charles Johnson favorite “My sisters and Brothers,” which has been a staple of the Jerry Garcia Band fordecades.

From start to finish, the diversity of this group transitioning from one style of music to another as smoothly as a well-oiled machine kept me on my (twinkle) toes the entire night, as it did for so many others. Not a single patron left this show without a huge grin and tired legs. Hopefully this collaboration will return to Baltimore and share their exceptional talent with us again.

7. So Many Roads (Grateful Dead cover)

5. Join Together (The Who cover)

7. Join Together (The Who cover)