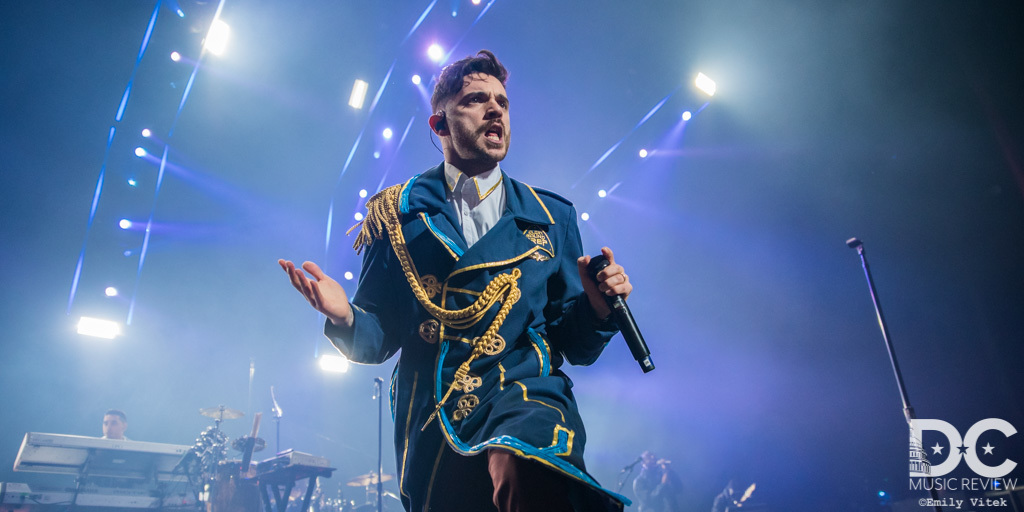 Despite the name of his hit single “All Time Low”, Jon Bellion left fans feeling quite the opposite after his show Friday evening at MGM National Harbor. Fans spent the evening in euphoria singing and dancing along to Bellion’s tunes, which combine indie and contemporary styles with hip hop to create a unique sound. While “All Time Low” off Bellion’s first studio album The Human Condition helped him rise in popularity, Bellion has previously worked on popular songs including cowriting the Eminem hit “The Monster” and "Trumpets" by Jason Derulo. Bellion released his second studio album, Glory Sound Prep, through Visionary Music Group and Capitol Records last November and is currently on a US Tour in support of the album. Jon kicked off the second night of tour decked out in the blue and gold suit featured in his “Stupid Deep” music video. He opened the night with “JT”, the second song off Glory Sound Prep in which Bellion reminisces on the past when he would dream about achieving success. While Bellion refers to the actor John Travolta multiple times throughout the song, the reference is a play on words along with the mention of Bellion’s vacations in Greece, as Travolta was a major character in the film Grease.

Next up Bellion played two other songs off the new album, “Let’s Begin” and the opening track “Conversations with my Wife”. In that song, Bellion describes his uncertainty about his wife’s commitment and whether the love would remain even without his fame and social media.  While fans were initially surprised to see Bellion refer to a wife in his songs since his relationship status had been kept private, Bellion confirmed his marriage on Twitter shortly before the release of Glory Sound Prep and wore a wedding ring during the show.

Will you love me when my phone turns off?
I don't want to be some digital Jesus
No more followers, we'll both get lost
When it's me and you inside real life

// "Conversations with my Wife" Throughout the evening Bellion performed additional songs off Glory Sound Prep, including “Couples Retreat”, “Blu”, “The Internet”, and “Stupid Deep” all while keeping the energy levels high and running back and forth across the stage. Part way through the set Bellion performed “All Time Low”, the emotional ballad that tugs at the heartstrings of anyone who has experienced a devastating break up. The evening’s set ended with an encore performance of “Good Things Fall Apart”, Bellion’s recent collaboration with DJ and producer Illenium.

The “Glory Sound Prep Tour” continues across the United States through August with stops in Orlando, Nashville, Los Angeles, and more. Fans who missed Friday evening’s performance can still get tickets to the Baltimore date in August where Bellion will be playing the final show of the tour. Tickets can be purchased for the Baltimore date below, and fans can expect an incredible evening as Bellion ends the two-month long tour with a bang. Check out photos from the show below, and listen to Bellion's albums Glory Sound Prep and The Human Condition.

3. Conversations with my Wife