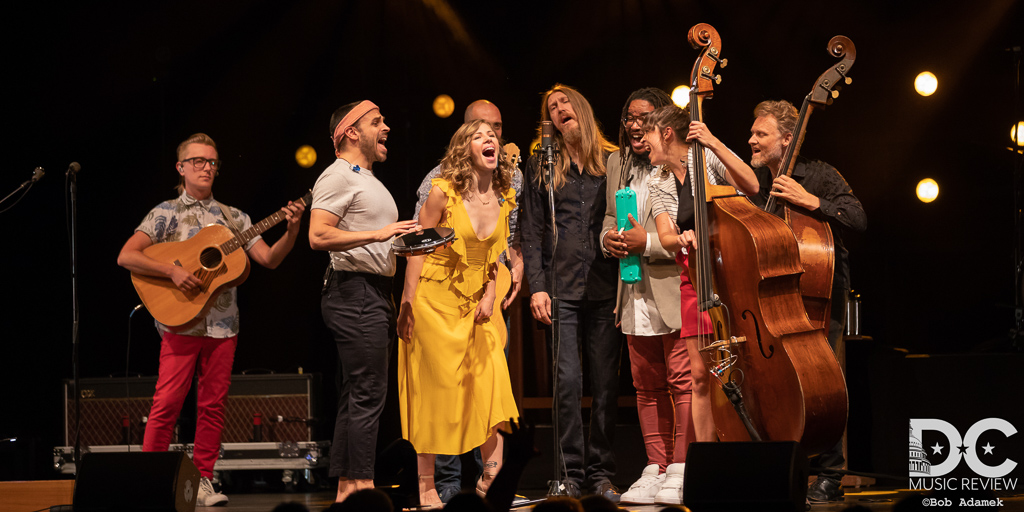 It was an amazing evening of live music and festive celebration on June 9th at Wolf Trap in Vienna, VA.   Not only was there a musical lineup of two equally talented acts but the audience was also treated to a cool and dry weather that the delighted audeince members knew would not last too much longer.  Relaxed concert goers enjoyed delicious picnics stretch out along the green lawn of the venue.

Brothers Oliver and Chris Wood along with band mate Jano Rix took the stage first and showed the audience why they are so incredible to see live.  The energy that Chris alone brings with his more than impressive footwork, is only amplified with Oliver and Jano and is makes a trio that is a must see onstage. Oliver Wood of The Wood Brothers

Oliver Wood of The Wood Brothers

Opening their set with a big cover, literally, of Jimmy Reed's "Big Boss Man" they also thrilled attendees with hits of their own, some off the Grammy Award nominated album One Drop of Truth as well as thrilling the crowd by having members of Lake Street Dive Rachael Price and Bridget Kearney join the band for both "Who the Devil" and "Postcards From Hell". After some members sharing the stage with the opener, it was Lake Street Dive's time to take the stage with all members and shine bright.  The group proved to be stellar entertainers and showed the audience a wonderful time as they worked their way through their set which included a wide variety of covers that proved to be great picks.

Making sure to give their keyboard player, Akie Bermiss some extra love, lead singer Rachael Price gave him the lead on a cover of Shania Twain's "Still the One" that got the crowd swaying to the music and warmed up for what was coming next.  Before belting out their own hits that can be heard on the radio daily, they also took time to remember the music of yesteryear with nods to both The Staple Singers and Sly and the Family Stone.

As The Wood Brothers worked their way through their own original music they brought Lake Street Dive on stage to cap it off with a great two-song finale. It was impossible to not have a great time at Wolftrap with the sounds of both bands both individually as well as  when they were sharing the stage.

We eagerly await the opportunity to see The Wood Brothers and Lake Street Dive grace the stage in the DMV again soon!

Click here to see the setlist for The Wood Brothers at Wolf Trap on June 8, 2019​

Click here to see the setlist for Lake Street Dive's performance at Wolf Trap on June 8, 2019 Click to buy Free Yourself Up on CD or Vinyl