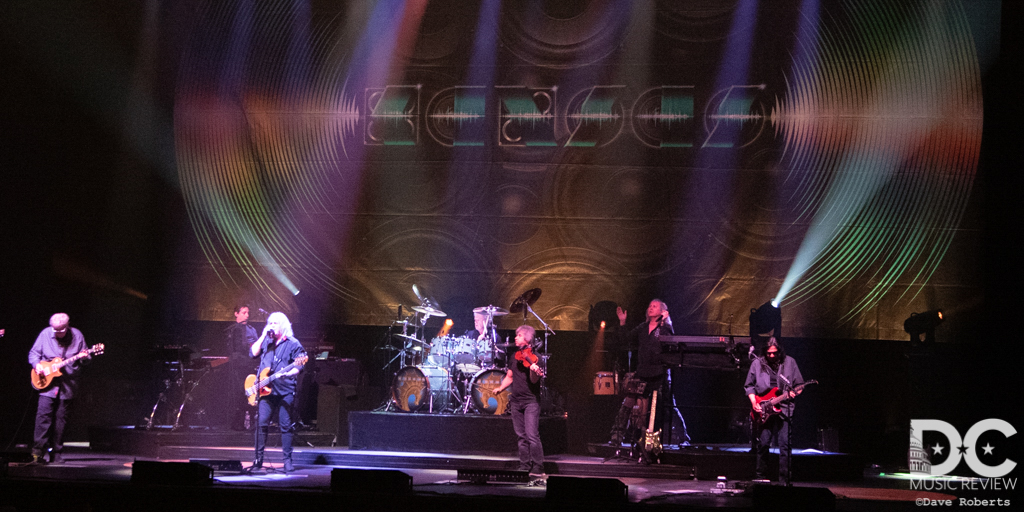 Kansas enlightened its fans on Friday, March 1 with their classic progressive-rock sound featuring soaring electric violin playing, keyboard and synthesizer cosmic sounds, and guitars to slice the musical galaxy of resonance into as many pieces as the audience could envision in their minds.

The band Kansas has it beginnings all the way back to the early 1970’s when prog-rock was just forming, as a matter of fact they were right in the mix of helping create it.  Bringing keyboards and synthesizers, and the unique sound of electric violin into the mix of rock-music was genius.  Of course to fuse all of these components together and be successful with it, a talented group of musicians and a creative vision was needed, hence the numbers of accomplishments this band has had over the years. As most classic rock bands have had different line-ups throughout the years, Kansas is no different.  Drummer Phil Ehart and guitarist Rich Williams have original ties to the band dating back to 1973, and bassist Billy Greer joined Kansas back in 1985.  The fourth longest band member belongs to David Ragsdale on the violin with newest member Tom Brislin on keyboards.  Ronnie Platt on vocals and keyboards and Zak Rizvi on guitars rounds out the current members of Kansas, and I must say that they sound fantastic together, and show very tight musicianship.

Opening the night with a five-song acoustic set, the boys wasted no time with bringing the audience into the evenings performance by connecting the music to the crowd though a musical relationship.  Apologizing for having to re-schedule a previous performance due to an illness in the band, Kansas perhaps felt the desire to nail this concert to help make up for that.  And judging by the intensity in the house, the groove that was vibrating from the stage, I would say the mission was accomplished. ​David Ragsdale of Kansas on the Electric Violin

​David Ragsdale of Kansas on the Electric Violin

Personally, I love when a band of this caliber shares the entire night with the fans by themselves.  Don’t get me wrong, there is a time and a place for opening acts because without them musicians would not get the exposure that they often deserve.  But when a group can jam a two-and-a-half-hour set with very little interruption, man that is a show of epic proportion.  For one, it speaks volumes to the bands ability to sustain a live performance, and second, it sends the fans home feeling fully satisfied that they witnessed a great show.

After settling in on stage, the band tore into a ten-song electric set.  Mixing up the setlist, Kansas was nailing song after song from a variety of different albums.  Most of the music played was highlighted from albums from the early to mid-seventies, including  “Two Cents Worth” and “Mysteries and Mayhem” from Masque (1975), “The Wall” from Leftoverture (1976), as well as “Musicatto” and “Taking in the View” from Power (1986).

Now keep in mind these acoustic and electric sets were before the album the band is supporting on this tour, Point of No Return (1977), was played in its entirety, opening to ending note.  Such an intricate album placed right in the middle of the set, the band proceeded to weave in and out between many different layers of music.  Singing duties were equally shared by bassist Billy Greer and Ronnie Platt, who also spent his fair share of time on the keyboards.  The band gelled, shaped, and molded such finely designed songs throughout this portion of the show that just captivated the listeners. Growing and building towards a storied ending, the show closed with “Carry on Wayward Son”, the bands first top 20 song. ​Phil Ehart of Kansas on Drums

​Phil Ehart of Kansas on Drums

This was such an enjoyable evening at one of Baltimore’s finest halls, The Modell Lyric, which dates back to 1894 when The Music Hall (1894-1909) opened with a performance by the Boston Symphony Orchestra. The Lyric Opera House (1909-2010), and currently The Patricia and Arthur Modell Performing Arts Center at the Lyric continues to bring top quality entertainment to Baltimore.

All in all it is simple to assure that the folks that came out were delighted by the bands performance.  Covering a variety of their music catalog, the band left no doubt that they still have the desire, endurance, and deftness to put together a rock and roll show that will continue selling tickets enabling the Kansas music to live on.  For us classic rock fans that is a win-win situation as we continue to hold onto the music of our youth as it still lives in our blood and in our hearts.  Carry on my Wayward Son, until we meet again on the road… Click here to see the setlist for Kansas  at The Modell Performing Arts Center at the Lyric on March 1, 2019

Recent Coverage at The Modell Lyric