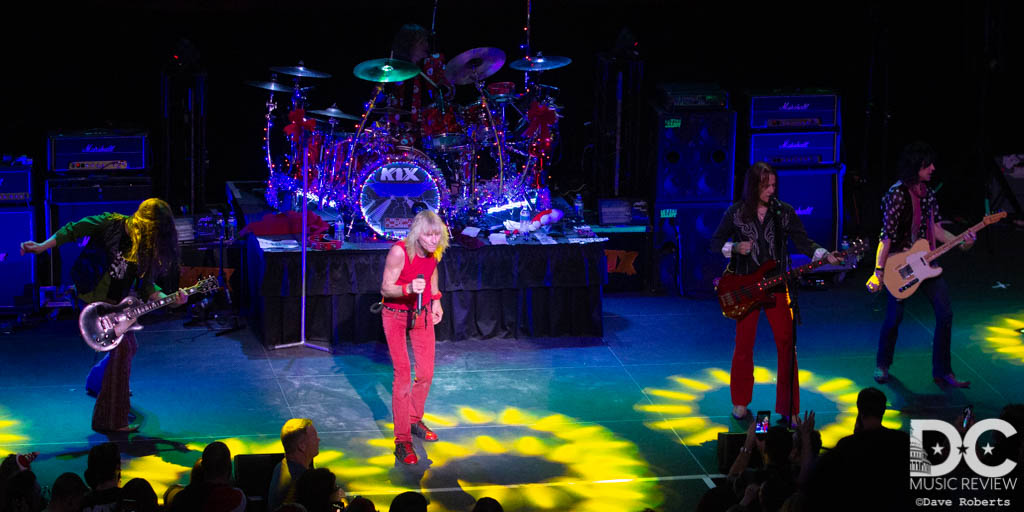 My first exposure to Kix was when I visited the Inner Harbor with my parents in 1985 while still  in high school.  98 Rock was running a dunking booth near the Aquarium in which I was able to successfully sink a DJ three out of three times.  My prize? A promotional copy of the album Midnight Dynamite. The band, who formed in Hagerstown, have been doing their annual Kix-Mas show for approximately eight years and let me tell you this, these loyal fans came out to support these local hard-rock heroes as if they were still rockin’ the house at Hammerjacks.  Sharing stories, laughs, and some head-banging madness, Kix still has the flare and pizazz to wrap up your coin and take it to bank.

From the opening licks of “Hot Wire” all the way through the last song “Girl Money”, Kix ripped the Rams Head to pieces, I mean literally shredded the place. This was one of the best crowds I have ever experienced in my time in Baltimore, and for good reason, Kix-Mas live in downtown Charm City.

Celebrating 30 years since the release of Blow My Fuse in 1988, Kix has been highlighting this record for its shows by rolling through the entire recording live. Achieving platinum status in sales, this album has all the licks and riffs that was a perfect fit for the state of the music scene in the mid to late-eighties, and still very alive and relevant today. Sharing the guitar licks were founding members Brian Forsythe and Ronnie Younkins, taking turns as they clearly partnered in the six-string sting that kept the fans captivated until nearly midnight. Steve Whiteman has got to be one of the best front men out there, full of swagger and energy, this man has got the moves and boogies all over the stage the entire show.  Leading this band sure looked like it came easy to Whiteman who, at the age of 62, remained fully engaged in his performance from beginning to end. He played with and fed off of the crowd all night long, and even hosted a marriage proposal.  Making sure the fans went home drained from a rock and roll party that can’t be beat, Whiteman has nothing but fun in his back pocket and strutted it all night long.

The rhythm core of the band is tight and on the money with Mark Schenker, who has been playing bass since the Kix reunion in 2003, and Jimmy Chalfant who has been playing the drums with the band since 1979. Dressed for the occasion as Jimmy was in his Santa Claus attire, along with his seasonal decorated drum kit, these guys kept the musical foundation on course and festive to go right along with the Kix-Mas theme. With seven studio albums to draw from, Kix has plenty of music to keep the fans driving full throttle on both sides of their Blow My Fuse material.  “Midnight Dynamite” and “Sex,” which has only several live performances this year, were crowd-pleasers and among the evenings favorites. “Same Jane” and “Love Me With Your Top Down” were also in the set, and to be honest, every song laid out was well-received as the crowd sang along with the band for each and every one.

The Rams Head Live was packed to the ceiling, from the ground floor stage and bar area all the way to the tippy-top balcony overlook three-levels high. If you have not experienced a sold-out show at this venue, it definitely feels jammed-tight, but still has that sense of an intimate sized venue with plenty of viewing options available including some seats on the second level.  With plenty of televisions offering up the Ravens game, this was a festive night of classic Kix music to satisfy any hard-rock fan. Streetlight Circus from New York City opened the show and got the crowd off to a rowdy start.  Reminiscing of days when lead singer David Shaw said he used to come down to Baltimore to see bands such as Kix and Dirty Looks, he was very appreciative of the opportunity to be opening the evening for the boys.  Streetlight Circus kicked into high gear with some straight ahead rock featuring songs such as “Kissing Like Bullets,” “House Is On Fire,” and a rocking cover of The Cars “Dangerous Type.”

I still find it hard to believe this was my first time seeing Kix, but I can guarantee you that it will not be my last.  Kix sounded fantastic, the energy was through the roof, and the crowd helped direct the bands enthusiasm in creating a memorable night of Kix-Mas fun.  The local Baltimore favorites continue on with dates rolling into 2019, but will definitely kick into high gear when they headline Friday night once again at the M3 Rock Festival at Merriweather Post on May 3, 2018. Make sure to go check them out and support one of the best performing Maryland bands out there. Wishing You All A Very Very Happy Kix-Mas!

Click here to see the setlist for Kix's  performance at Rams Head Live! on December 22, 2018