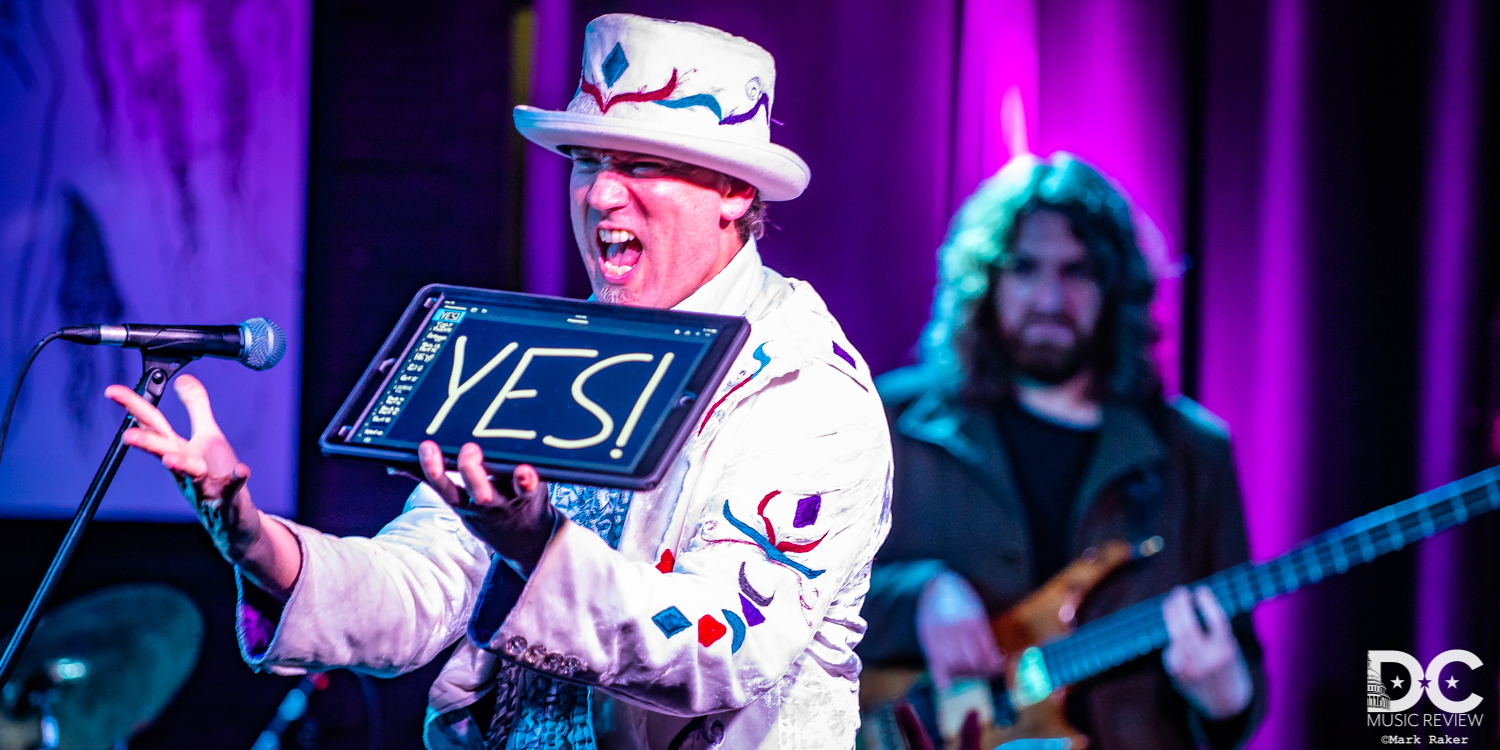 Larry Keel and Jay Starling were scheduled to perform but were unable to attend due to family medical needs. It is a true testament to the pure talent that Butler brings to the conducting and the talent he invites on stage that this night’s Orchestra fully delivered on the promise to bring improv and unscripted jam to new heights. Everyone Orchestra began in 2001. This is a band that never rehearses together. They have a rotating group of incredible musicians who read what is going on and jam .  Some are regulars some are first timers. On Friday there were two EO “virgins” as Butler calls them - Herrington and McClelland. When speaking about the musicians and the improv Butler said, “We are making the music up here all night. It’s a blessing to come up with such talented musicians and have a completely clean slate to enjoy music. Anything can happen when we get on stage.”

Butler holds up a sign with tempo, key or other cues for the band. The energy he has as he conducts is contagious. The band follows his lead and plays off each other and the audience gets fully engaged in the beat, spontaneous lyrics, and musical adrenaline. Each band member has a chance to lead the jam and showcase their talent. There is plenty of spotlight to share when EO gets together. As a long time band member Schnier tells people all the time, “I’ve been playing with EO almost 15 years and it is still my favorite gig to this day. The best thing about it is that all your life's work prepares you for this moment but there is nothing else specific that you can do to prepare for any given show. You just show up there is no script, no homework. It is the sum total of everything that you have done. Then you let caution fly to the wind. You get to meet a lot of wonderful talented people be free and have fun together.”

Soulful vocals of James Casey, who currently lives in New York, serenaded the audience in his old hometown of Washington, DC and Gypsy Sally’s. When he sang  “The last time I was here I was here,” the crowd started clapping and singing along. Casey explained “I’m from DC and it is always nice to come back home to play. The crowd always comes out. When I’m playing with EO it’s nice since it’s all organic, all in the moment, you never know what it is going to be. It’s a lot of fun for me to just be myself in front of my hometown crowd.”

Since it's almost the New Year, there was talk of New Year's resolutions. Butler is making the same one as last year - to run a marathon, which he didn’t accomplish in 2018. This year the resolution has a twist - if he doesn’t run one he will conduct a show not in his trademark tails but naked. This lead into the Bucket List song “All of these things to do before I die”. Herrington who obviously enjoyed his first time with EO said, “It is such a fun experience! Matt has such great energy and a gift for curating a special experience for the audience as well as the musicians. It was an absolute pleasure. Very freeing. Reminds you to always have fun with music, whatever the gig or situation. And it’s always great to play with such talented and kind folks.”

Natalie Ahearn (keyboard) and  Mike Candela (guitar) made a guest appearance to help close out the evening. Ahearn summed up her feelings, ”With of Tomorrow, I’ve had the opportunity to share the stage with so many amazing bands. I had never seen Everyone Orchestra before so the show on Friday was just a whole new experience, getting to see them and play with them, it was awesome. I love musicians like Matt Butler. The outfit, the energy, and the musical leadership... those are the kind of things that make the show.” The band was all smiles as they jammed. It was fun for the audience to watch the interaction between Butler and the band, the band members and each other and Everyone in the band and the audience. As they teach in improv, always say “Yes” and Butler made us say “Yes” all night long.

However, during the dance party encore the crowd changed Yes to "NO!"  when Casey asked during the call and response part of the jam “are you all ready to go home?”  Butler ended the show wishing everyone a Happy New Year, peace and prosperity to you all from us all.  The Everyone Orchestra left everyone wanting more as they left for home after this incredible show. They generally make two to three visits to the DC area - be sure to catch them next time around,

Local fan favorite, of Tomorrow, (also known as Band of Tomorrow) kicked off the high energy night when they opened on the Gypsy Sally’s main stage prior to Everyone Orchestra. Of Tomorrow (oT) is a DC based band formed in 2015 who describes themselves as a funk rock reggae samba hip hop musical contraband collective. They played a lot of fun shows and festivals in 2018 including 9:30 club with TAUK and the Firefly Music Festival. They are lining up lots of cool stuff for 2019 now and aiming to do everything even bigger.  The new oT lineup is made up of Geoff Browning, (vocals and guitar). Randy Nicklas (bass), Connor Kessler (drums) Natalie Ahearn (keyboard) Mike Candela (guitar) who played Friday night.

of Tomorrow  loves playing with Everyone Orchestra. Browning says, “Matt Butler and Everyone Orchestra are a force of nature. It’s a blessing every time we get to make music and memories on stage with them. So many great people from the DC scene came out on Friday, there was electricity in the air and the whole oT crew was overwhelmed with gratitude. Very excited for 2019, we have a lot of fun things coming up in the Spring.”

The set of all original songs showed the scope of talent and music styles.

You can relive the entire night below with photos by Mark Raker, as well as full show webcast recordings and audio by Will Urquhart

First OT show with Conner Kessler on drums and Randy Nicklas on bass.