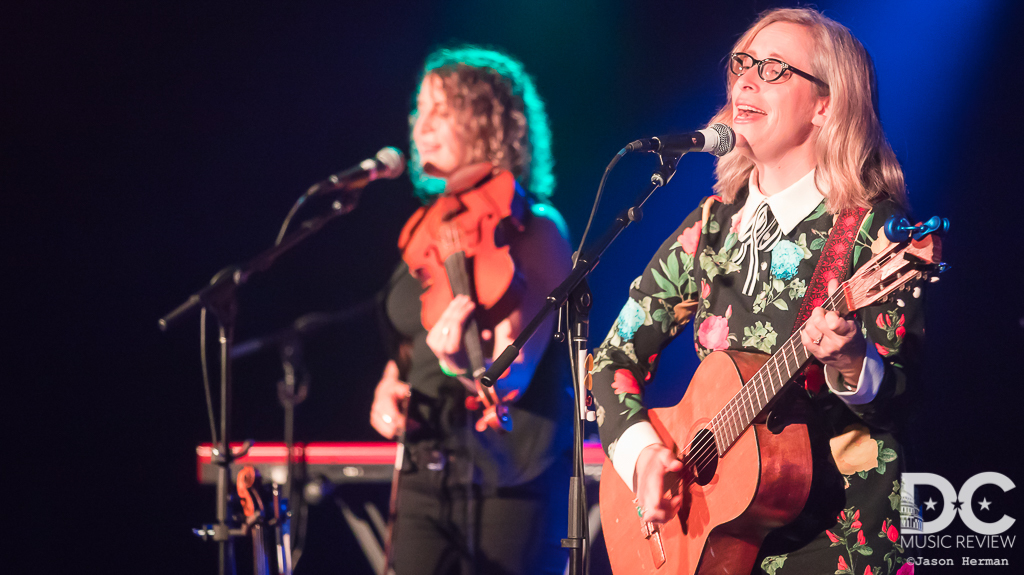 Distinctly characterized by her raw and airy vocals, Laura Veirs is a breath of fresh air. Toting poetry and truth throughout the entirety of her live performance, Veirs provided the perfect refuge from the infamous DC humidity in the basement of Union Stage on Sunday night. Veirs attempted to walk out casually and unnoticed, but as soon as the audience caught a glimpse of her distinct bespectacled self, they erupted into cheers. Immediately launching into “Margaret Sands,” the feeling of peace in the room was tangible. Relaxing back into their chairs, audience members let Veirs’s breathtaking vocals overcome them. Although a track off her latest album The Lookout, “Margaret Sands” has all those classical elements of mid-2000’s Laura Veirs: soft instrumentals supporting beautifully descriptive and nature-filled lyrics.

The audience was comprised of Veirs’s own personal “entourage” of family and friends who inhabit the DMV, as well as slew of fans who’ve waited years and years to see her perform. And although her set-list did favor her newest album, Veirs made sure to incorporate classics such as “I Can See Your Tracks” and “Wide-Eyed, Legless,” much to the delight of veteran fans. The former track was met with gasps when those iconic opening strums cued in Laura’s ethereal vocals. Harmonizing with Alex Guy (viola), the pair projected as powerfully as an all-female version of Fleet Foxes. In order to avoid falling into “auto-pilot,” Veirs challenged her band members to take a risk during the performance. The band had wonderful banter as Guy joked that she’d never before juggled on stage, while Veirs suggested that her risk could be sliding down the front table on her knees “Bruce Springsteen style.” Although their risks may have been imperceptible to the audience, it is clear the band played with the utmost fervor and passion, challenging their skillset for each song, pushing themselves to be their best.

“White Cherry” was signaled in by a jazzy and mystical swirl of instruments. Veirs dialed back her vocals on this track to allow the band to flourish and to showcase the immense power and talent of the composition. This track was louder and more urgent than her other songs that evening, making it a memorable performance. Even Veirs acknowledged the band’s talent, commending them as she said, “I just love watching them play that.” Veirs welcomed opening band The Hackles back onstage to perform “July Flame,” a song known for its choral verses and repeating chorus that asks, “Can I call you mine?” Comprised of Luke Ydstie and Kati Claborn the romantically inclined duo contributed their chilling harmonies to one of Veirs’s most treasured tracks. The Hackles proved to be the most fitting opener for Veirs, with their earthy and folksy harmonies and call-and-response lyrics warming up the crowd.

Veirs completed her set with “Pink Light,” a wistful and hopeful track with a beat that’s easy to clap along to. However, after she humbly bowed and exited, that steady clapping grew louder and more exuberant as the crowd banged on tables calling for an encore. When Veirs returned, she was accompanied by Brenda Evans, the great granddaughter of Elizabeth “Libba” Cotten, the celebrated blues and folk musician. Veirs has a special interest Cotten’s musical journey, and translated that intrigue into a picture book that tells how the self-taught musician became one of the most well known artists of her time. Veirs had the honor of playing with Evans, who had a hand in writing Cotten’s song “Shake Sugaree,” the first track of Veirs’s encore. The duet was soulful and ripe with nostalgia, providing a completely one-of-a-kind experience.

Veirs could sing the phonebook, or, like The Decemberists, about murder and revenge, and still make it sounds beautifully poetic. The ease with which she graces the stage can only come with years of experience and unending passion. Veirs’s music is good for the soul and warms from within. Her crisp vocals and lingering melodies will stick with you even on the gloomiest of days. Veirs is impossibly good, and we are so grateful she stopped to play in DC.

Click here to see the setlist for Laura Vier's performance at Union Stage on May 27, 2018

4. I Can See Your Tracks

7. When You Give Your Heart

3. True Love Will Find You Editor Note: A small annectode about Elizabeth "Libba" Cotten and how her legacy endures.

It was early in the morning on the second day of a music festival as campers huddled around a fire-pit. As some dried out their wet clothing, others played music together with instruments they brought to the festival. As I dried out some wet jeans by the fireside I sat beside three musicians playing their instruments. After a few minutes of listening ,one individual stopped to tell me about his friend. He told me "You see what he is doing? He is playing his instrument upside down. He is not playing like Jimi Hendrix who played his right-handed guitar upside down and restrung his guitar chords to play it left-handed." He continued, "This is very very unique and there are only a few people in the world who play acoustic songs like this. There was one woman who pioneered this type of playing but she died a few years ago, but he continues in her tradition."

The woman he spoke of was none other than Elizabeth “Libba” Cotten. Less than two weeks would pass before I watched Brenda Evans, the great-granddaughter of Cotten, perform at Union Station. Cotten was born in 1893 to a musical family and by age seven began her musical journey which lasted until her passing in 1987. It is truly wonderful to know that Cotten's musical style and legacy is embraced, carried on, and continues to inspire musicians today. To learn more about Elizabeth "Libba" Cotten please refer to her Wikipedia page.