Lettuce and Turkuaz Funk Up The Anthem 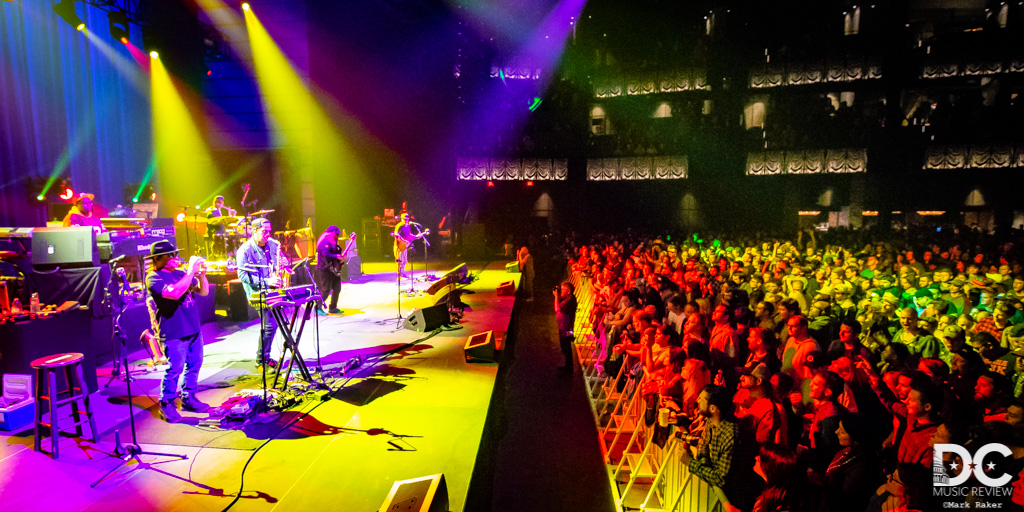 The Anthem hosted an uber funky double-billing as the Boston-born six-piece, Lettuce, brought their tour to DC with the ascendant Brooklyn-based nonet Turkuaz in support. The two bands, along with several special guests, combined for an outstanding night of funk, soul, go-go and hip-hop that had a capacity crowd of thousands boogieing and shaking throughout the night. Turkuaz opened the festivities, with hardcore fans dressed in the group's iconic color scheme. The excitement in the room was palpable as Turkuaz drew the Lettuce fans to the Anthem early, giving the show the feel of a co-headliner rather than an opener and headliner. The band took the stage clad in their trademark rainbow outfits and was complemented by an outstanding light show for an extended opening set. But Turkuaz wasn't just a pleasure to look at on stage, the band had the chops to back up their theatrics. The venue seemed to quake as drummer Mikey Caruba kicked off one of the band's earlier songs, 'The Mountain,' and started the bands climb through an outstanding set of music. The band continued with two of their newer songs, 'If I Ever Fall Asleep' and 'Life in the City,' which spotlighted the synchronized dance moves of singers Shira Elias and Sammi Garrett. The entire crowd was moving and grooving by the time the band brought Lettuce's keyboardist, and native-Washingtonian, Nigel Hall for a cover of The Bar-Kays classic 'Holy Ghost.' Turkuaz kept the energy turned to eleven throughout their set, and it was returned to them tenfold by an adoring audience. Closing out the set with 'Monkey Fingers,' a favorite set-closer for the band, the crowd at the Anthem was left begging for more at the set-break.

Lettuce kicked off their set with 'Get Greasy,' an apt title for a song that got the stiffness out of the crowd's hips and ready for the long-haul now that they were getting to the "main event." The band sounded tight as they worked through their set with precision and purpose. Then, after the sixth song of the night, the band brought out their first special guest of the evening, local rapper Beau Young Prince. The local flare of the show continued in the very next song as the band welcomed Tyrone "Jungle Boogie" Williams of Rare Essence and Big Tony of Trouble Funk to play some Go-Go. These two pioneers of Go-Go ignited the crowd and brought the energy through the roof, as members of the Lettuce horns section played percussion for the trademark Go-Go beat. The sit-in was a classy nod from Lettuce to this unique subgenre of funk that was born and is only performed in Washington, DC. Following the Go-Go highlight of the show, Lettuce invited Southern rock guitarist Marcus King to the stage for a collaboration that many in the crowd were eagerly awaiting. King received an enthusiastic welcome from the crowd and added a soulful element to the band's sound that paid dividends when they launched into an outstanding cover of Curtis Mayfield's 'Move on Up.'

Between the incredible opening set by Turkuaz, the stand-out sit-ins, and non-stop energy, it's safe to say that everyone at The Anthem had sore feet by the time Lettuce wrapped up their show. This was a funky party of epic proportions.