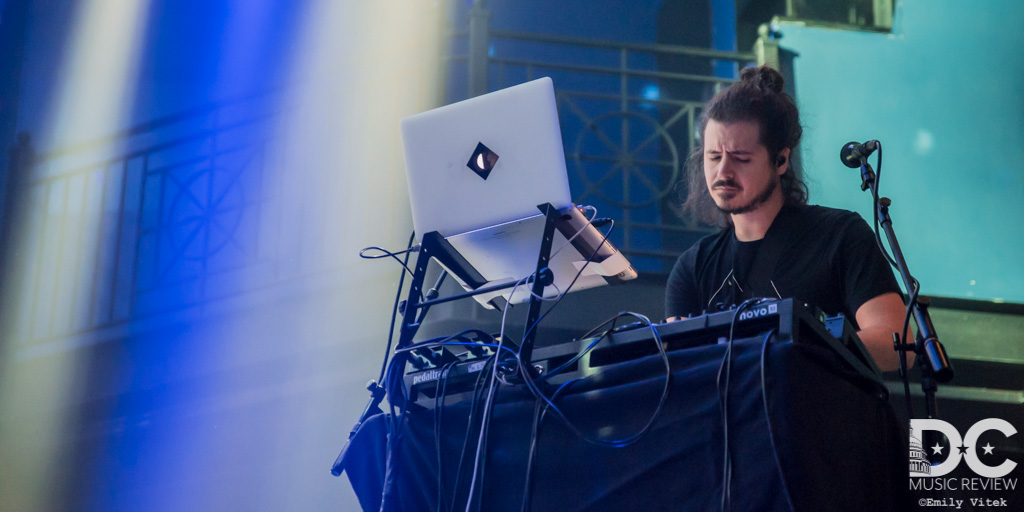 On Saturday November 9 at 9:30 Club, Litz, a local rock band hailing from Baltimore, started the night off with a high energy performance that had the audience moving. A notably large crowd attended the late night show’s opening act, and that crowd would continue to grow until Papadosio took the stage at 12:30am Sunday morning.

Post Litz performance, the atmosphere was filled with an electric buzz, and it wasn’t only because of the amazing performance that had just finished - comments from the audience such as, “this is my 123rd show,” or “I’ve been seeing Papadosio for 12 years,” or “we met 4 years ago at a ‘Dosio show, and now we’re married,” could be heard throughout the venue. This band has a loyal following. All five members of Papadosio walked out to their allocated section on the stage for the last night of their new album, Content Coma, tour: Rob McConnell to his bass, Rob Brouse to his keyboard and assortment of electronic equipment, his brother, Billy Brouse, to a similar arrangement, Mike Healy to the drums and Anthony Thogmartin to his guitar, electronics & mic. They immediately started the night off with track one from Content Coma, “Write Sing Play Mix.” The lyrics, sang through a vocoder with a robot-like effect, were an excellent theme for the set, “I I I I live for music melody/ and harmonious sound/ amplified around/ I I I I live to sing sing sing sing songs/ almost like it seems/ rendering our dreams/ a musical life...” The crowd was singing and dancing along on the floor, and upstairs. Next, they played, “The Lack of Everything,” from their 2009 album Observations. Throughout the set, they played songs from a variety of their discography, only playing three songs from their new album, of which fans already seemed to know all of the words. It seems like every time they started a new song, the audience cheered like this is the song they had been hoping they’d hear tonight.The excitement was palpable, and only in short moments between songs was there any feeling of stillness from the audience. Somewhere in between the two variations of “Find your Cloud,” from their 2012 album T.E.I.T.O.S, and “Hippie Babysitter,” from Observations , Anthony Thogmartin said, “Alright D.C., we’re tired, sing as loud as you can!” The audience roared, and if there was any trace of tiredness on stage, it was gone.

Hearing their music live is such an engaging experience because of how differently they play each song compared to their recorded music. They are a hybrid electric instrumental psych rock jam band, and the music flows between each band member like a conversation, it’s hypnotic. Not to mention, their backdrop with psychedelic videos playing paired with 9:30 Club’s impeccable lighting.

Ending the night with “Fire Rite,” from their newest album, they truly showed off  how well they vibe together, and particularly showcased Thogmartin’s guitar skills. It’s no wonder Papadosio has such a loyal following.

Click here to see the setlist for Papadosio's performance at 9:30 Club on Saturday, November 10th, 2018