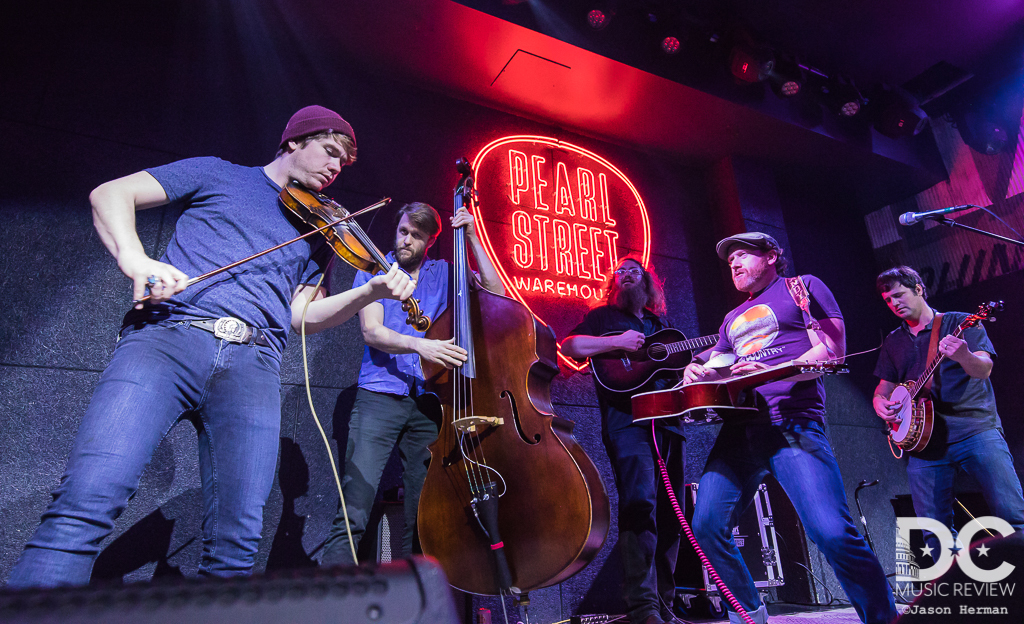 The Lil Smokies from Missoula, Montana performed at Pearl Street Warehouse on Saturday, February 10, 2018 and left the audience breathless from their powerful performance.

The evening started off with a solo acoustic set by Baltimore musician, Jordan August. August has been well received in his hometown of Baltimore and has steadily gained a following of dedicated fans. As his success grows, so too does his tour radius, with this evening’s performance being August’s first in Washington, DC. He put on a passionate and heartfelt performance, playing guitar, singing, operating a drum pedal, all while nursing two broken toes. Based on the applause and reception by those in attendance, it will not be his last DC visit.

After August’s performance there was a slight break while stagehands set up for The Lil Smokies. Setlists were carefully and methodically taped down. For those in the audience who had never seen The Lil Smokies perform live before must have thought the taping was excessive or slightly unnecessary.

Within seconds of hitting the stage and clutching their instruments, the audience fully understood why such care was taken in securely taping down the setlists. The Lil Smokies began their frenetic, explosive, and high-energy performance. Those in attendance were treated to seamless interplay between band members Andy Dunnigan (dobro, vocals), Jake Simpson (fiddle, vocals), Matthew Rieger (guitar, vocals), Matt Cornette (banjo), and Scott Parker (upright bass). Dunnigan in particular oscillated from one side of the stage to another with his dobro by his side, exuding pure overwrought, amped-up energy. Jake Simpson on fiddle played his instrument so robustly throughout the night one could only wonder when a string would break or the bow would unravel. Throughout the evening, Matthew Rieger’s hair flew about as he whole-heartedly played his guitar, vigorously bounced his head about, and swapped smiles and musical exchanges with Matt Cornette. Scott Parker held down a guiding and steady bass backbeat to support the energetic performance throughout.

Simply put, if you had already seen The Lil Smokies, you left the venue that night with your batteries recharged and an ear-to-ear smile at yet another amazing performance. If this was your first experience seeing The Lil Smokies, you likely left Pearl Street Warehouse emotionally recharged as the bands energy was undoubtedly transferred to those who were lucky enough to witness the spectacle. However, if you still have not seen The Lil Smokies live, you should definitely check out their tour schedule so you can witness their performance firsthand.

DC Music Review looks forward to the return of The Lil Smokies to the DMV and to Jordan August’s next performance in Washington DC, Baltimore, and venues around our region.

Click here to see the setlist for The Lil Smokies performance at Pearl Street Warehouse on  Feb. 10, 2018.