Lily Allen Is No Longer 22, But Her Future Continues To Look Bright 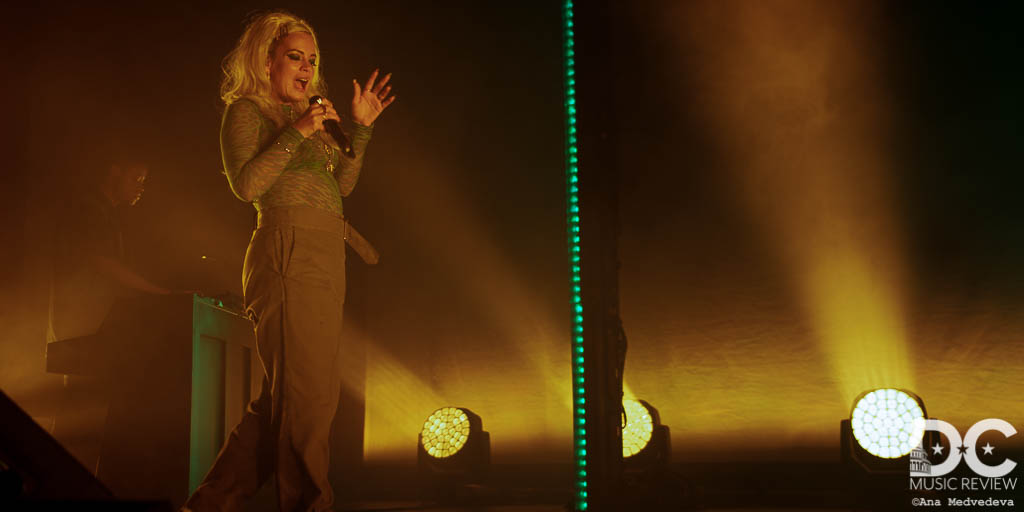 Saying that Lily Allen knows how to make a statement is well...an understatement. Back for her first North American tour in four years, Allen appeared on stage at The Fillmore Silver Spring to the final note of the infamous THX “Deep Note”. You know, the one that had us all jumping for the remote as we popped in a DVD. But DVD players are all but a thing of the past, much like Allen’s aloof persona. Nervously smiling, Allen launched into “Come On Then” off of her latest album, No Shame. The tune is strikingly honest and understated, speaking to how the media and haters have painted her as a bad mother and wife. With no witty lyrics to cover up the true emotions felt by Allen, the song points to a rebirth for Lily Allen. That doesn't mean that she's lost any bit of her fantastic sense of humor though.

Sniffling through three more songs, Allen greeted the crowd with an apology,

“I’m so sorry everyone, I’m very sick...so don’t cash in your ticket for a refund please!”

Fully understanding how much it sucks to have to come to work even when you feel like shit, the audience shouted words of encouragement and support at Allen.  As is common for creatives, it appeared that Allen was the only one who truly felt disappointed in how she sounded.

But hasn't always been the case—Allen's previous album, Sheezus marked a sharp departure from 2009's It's Not Me, It's You and received mixed reviews from critics and fans alike.

With three years between No Shame and Sheezus, it’s clear as day that Allen has come back to her true self. Stripping her performance of back up dancers and props, Allen instead kept the set up simple and let the music naturally move her.

Singing to a crowd full of folks in their late 20s and early 30s, this new direction is indicative of her audience’s stage in life. With not a single iPhone blocking the view for more than a minute at a time, Allen’s fans (and Allen herself) are no longer the one’s proving themselves, whether it to be to their friends on Instagram or the music industry.

That’s not to say that Allen and her fans aren’t keen to dance and relive her previous era. From “Smile” to “The Fear”, Allen played a string of her hits next. Taking a second to cough and wipe her nose, the audience cheered enthusiastically to remind Allen that they were having a splendid time despite her being ill.

Slowing things down, Allen spoke to the audience about her "Like A Version" performance on Triple J, an Australian radio station. She chose to cover Lykke Li’s “Deep End”, a song speaks to Li’s experience with marriage and ultimately hints to the relationship ending—an experience that Allen can relate to deeply.

It’s this cover in particular that strikes me the most out of Allen’s entire set. While she has never had any trouble being straightforward and open with her lyrics and fan base, it felt that there was a slight barrier. None of the situations that Allen sang about seemed to affect her, as she was the epitome of the “Cool Girl”—untouchable, unemotional, and always down for partying.

With her newly found direction, it appears that Allen is stepping away from this identity and is beginning her journey to explore the nuanced human being that she is. Don't worry though, she'll continue performing "Fuck You" with just as much gusto...Trump somehow is still President right...?