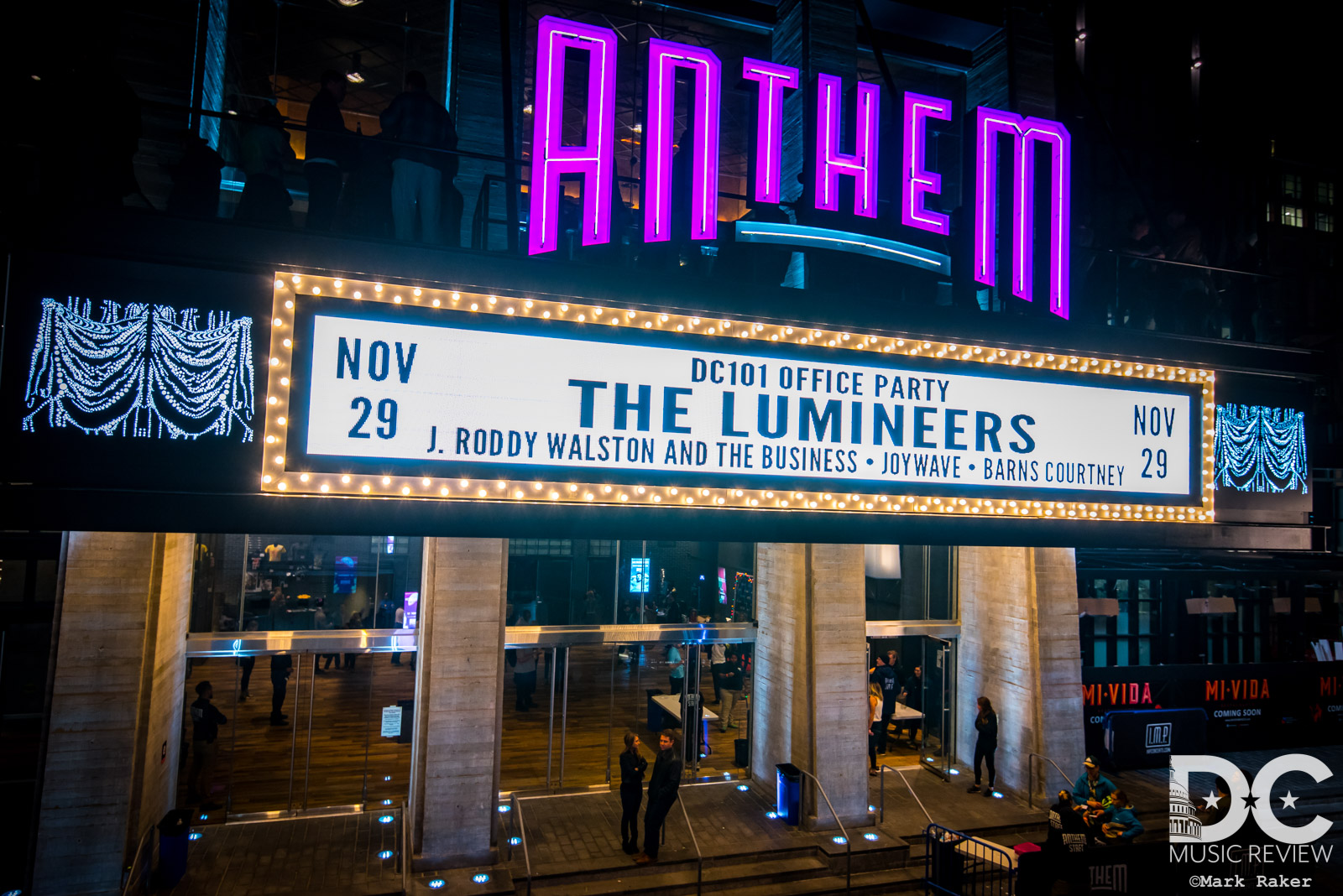 The Lumineers headlined a sold out DC101 Office Party event held at The Anthem on November 25th, 2017. There will be many office parties held throughout Washington, DC this holiday season, but it is doubtful that any will be as long, as loud, as festive, as energetic, and as passionately celebrated as this four-hour event attended by 6,000.

Venue doors opened at 6:00pm for the concert that would start at 7:00pm. Despite The Lumineers not performing until 10:00pm, several hundred people secured their position in front of the stage by 6:30pm. You could see young concert goers vigorously pulling friends alongside themselves as they ran towards the stage to secure their spot, “Come on! Cause I need to get there! I neeeed to get there!”

With their standing room positions secured, the most die-hard of fans glowed with excitement, knowing that they were only 10 feet back from what would be a very memorable performance. When approached and asked, “Who are you here to see?”, fans faces lit up with ear-to-ear smiles and proclaimed, “The Lumineers! I don't care that they come on in a few hours! Look at how close we are!”

At 7:00PM, Josh Klinger, DC101 nighttime personality, took the stage to welcome everyone to their “Office Party” and warned those in the crowd that they were going to “sleep very well” after getting home because of all the celebrating they would be experiencing.

The first band to start off the evening’s festivities was Barns Courtney. Courtney and his band were the perfect way to start off the show, as by song two they started engaging the crowd in band-audience sing-along collaborations, orchestrating the audience with his arms. By the end of the performance, Courtney told the audience, “If you are not getting up here, I'm coming down!” He proceeded to crowd surf for a few minutes with his fans. Next to perform was Joywave, a five piece indie rock band from Rochester, NY who put on a very impressive and energetic show. Then J Roddy Walston and The Business hit the stage. The Richmond, VA-based quartet is known for their energetic and pounding performances, and they did not disappoint. Walston alternated between guitar and piano during the set, while his bandmates in The Business supported him with driving and powerful playing. J Roddy Walston and The Business slowly and steadily increased the energy of the packed venue, which by then had no empty space extending from the stage to the soundboard in the back of the hall.

Slightly before 10:00pm, one could not help but feel an anxious tension and eager anticipation from those in attendance. This energy, which had been slowly building over the course of several hours, was ready to be released. Projection screens - that had been previously turned off - lit up and glowed with Cleopatra logos; large crystal lighting backdrops were lowered into positions. Venue music continued to play as everyone anticipated when the stage lights would come down. “Tusk” by Fleetwood Mac played loudly and echoed throughout the venue. As the crescendo of “Tusk” hit, the house lights went down and the band appeared on stage – each moment of tonight's concert built upon the next even if the audience had not known about the planned and choreographed build up. The Lumineers came straight out of the gate with “Submarines.” This joyous tune delivered an irresistible drum beat, giving the spellbound audience members just what they came here for: infectious music and an explosive release of joy and appreciation for this band. The Lumineers are composed of Wesley Schultz (vocals, guitar, piano), Jeremiah Fraites (drums, percussion, piano, mandolin, vocals) and Neyla Pekarek (cello, bass, vocals). The performance also featured members of the the live lineup, which included Stelth Ulvang (piano, accordion, percussion) and Byron Isaacs (on bass).

Seeing The Lumineers perform taps into one's innate and instinctive emotions – the tempo of the drum line pumps the infectious rhythm of the song deep into your veins while the energy of the guitar, pianos, tambourine and cello further push those infectious emotions into the capillaries of your being. Adding to the music were the brilliant crystal fixtures during the performance that radiated color and produced well-timed spotlights. The band performed “Flowers in Your Hair” as the three core members of Fraites, Schultz, and Isaacs performed as one synchronized unit at the front of the stage. Then Ulvang joined in on mandolin and seamlessly integrated with the trio, complementing Schultz’ guitar playing and adding to the energy. At the first chord and first utterance of “Hey!” off their mega hit “Ho Hey,” the audience erupted into deafening cheers. Those cheers quickly turned into audience members in every corner of the venue singing the lyrics back to the band. You could not help but feel the passionate and emotional singing as Lumineer devotees sang, “I belong with you, you belong with me, you're my sweet.” Every once in awhile, a song appears in the musical landscape that so innately conveys a feeling of deep rooted love between individuals. “Ho Hey” is exactly one of those kinds of songs. The way the audience sang to the band intensely bonded the emotions of a collective group with the few individuals gathered on stage. As “Cleopatra” began to play, the stage became more intimate with overhead spotlights bathing Schultz and Fraites in hues of white and teal. Throughout the performance, there were countless serene and tender moments. The Anthem space radiated with the warmth of a collective sing-alongs which were intertwined with explosive stage effects, such as when a confetti cannon enveloped the audience and The Lumineers in a canopy of a Winter Wonderland of snow-like confetti.

As the evening drew to a close, Schultz professed his admiration for Tom Petty - who tragically passed away in October this year - by playing an acoustic version of Petty’s “Walls (Circus)” (Editor: Which we can only hope that a new generation of music fans are exposed Petty and embrace his musical genius).

The event ended with a very spirited “Stubborn Love,” and as the song ended the band hugged one another on stage and then tossed out guitar picks, drumsticks, and even a tambourine into the audience, while Fraites accepted the challenge of launching souvenirs into the second balcony of The Anthem.

As audience members realized that there would be no encore at tonight's performance, one could feel that they reflected back on the lyrics they had just listened to: “It's better to feel pain [of no encore], than nothing at all... Keep your head up, keep your love. Head up, love.” A very grateful Neyla Pekarek of The Lumineers

A very grateful Neyla Pekarek of The Lumineers

Click here to see the setlist for The Luineers's performance at <The Anthem on November 29, 2017

1. Sleep on the Floor

2. Flowers in Your Hair

4. Where the Skies Are Blue