Lydia Night Of The Regrettes On Feminism, The Birthplace Of Punk, And…Hair 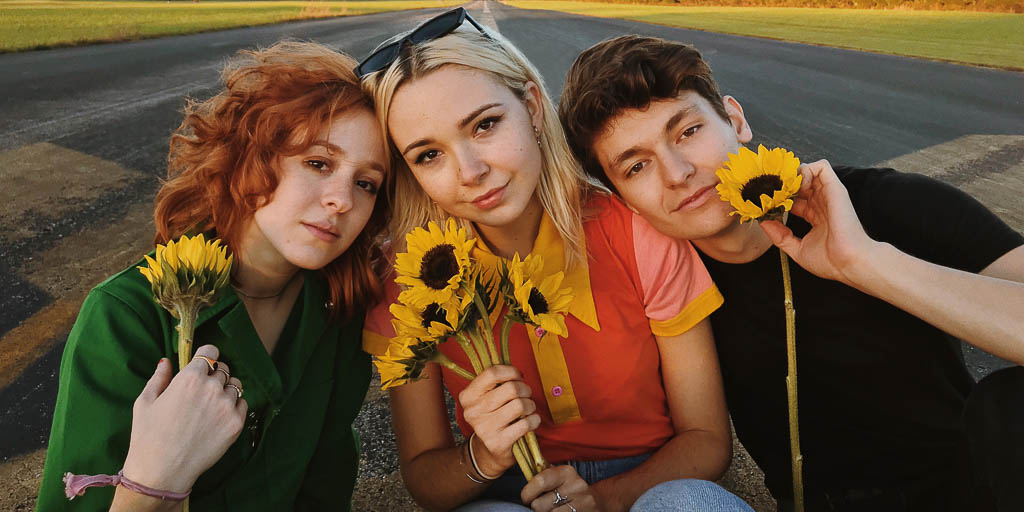 L.A. based punk rockers, The Regrettes, are set to perform in the birthplace of punk this Thursday, December 6. The band, comprised of Lydia Night (vocals, guitar), Genessa Gariano (guitar), and Drew Thomsen (drums), have enjoyed immense success in 2018 with their latest EP, Attention Seeker earning critical acclaim.

But it has not been all sunshine and roses for the three. The same year that brought them their first Coachella performance also came with line-up changes and a stolen van. Sticking true to the punk mentality, The Regrettes weren’t keen on letting a few setbacks derail their explosive year.

Prior to their gig at Union Stage, I had the opportunity to chat with the fiery Lydia Night about how she found the Riot Grrrl movement, what sparked their latest single, and the fear of the unknown.

To start off on a bit of a different note, I was looking at your Instagram a few days ago and noticed that you dyed your hair again.

Lydia: Oh, I love that—I did just dye my hair!

I dye my hair a lot too, so I’m always curious as to what drives other people's color choices. What inspires you to choose between colors? Is it setting an intention while you’re on tour or perhaps something else? It’s something I didn’t notice when I first started dyeing my hair, but it marks time periods for me. I don’t have a very good memory, so I’ll look back and be like 'Oh, that was during the pink hair period...now I remember!' [Laughs].

I guess it also marks starting anew for me. This tour we’ve had a huge change so I figured why the fuck not, and so my hair’s purple.

Awesome! Do you have any colors that are next on your list?

I might do a baby blue kind of purple; just a bit of a different shade than what I have now and then I think I’m done. I’m going to go back to my original...my OG real hair...really soon, so I’m trying to get in all the colors now since bleaching is such a bitch.

Thinking back to how many hours I've spent at the hairdressers with a tingly scalp, I couldn't help but sympathize:

Yes...yes it is….I actually think my next hair color is also going to be blue, so we’ll kind of match! You alluded to it earlier, but I wanted to touch on the change you had in terms of band members, with Sage departing in September. I imagine that shifts the dynamic between band members and any changes routines you have while on you’re tour. What has that transition been like?

Honestly, it’s been mostly a positive. Of course it’s scary at first, with a big change like that..it’s huge and really freaky. You don’t know what to expect.

All I can really say is that if someone doesn’t want to be there, when you kick them out of the equation, you can feel that. It’s only a positive thing, no matter what happens next.

Has your live show changed with that shift? I saw that you guys might have gotten a new bassist, but I wasn’t 100% sure.

Yeah, not officially, but yes. We’ve only played a few shows so we’re still navigating it a little bit. Things have been going pretty smoothly so far and I really can’t complain at all. It’s a new energy and it’s just really fun and exciting. D.C. is pretty famous for their punk scene, what with Fugazi, Bikini Kill, Bad Brains...all of those “small names” coming out of the nation’s capital. Some of the roots of the Riot Grrrl movement also formed here, which I know is pretty influential in your music. You’ve been to DC before, so that had me wondering if that environment and history changes anything when you’re performing here?

It’s really inspiring and the shows are always fun because of that history. People there have an understanding and an appreciation for real, raw music and live shows and you can definitely feel that.

With the Riot Grrrl movement and your strong feminist views, how did you fall into that? Was it something you always grew up with or did you come across it as you matured?

My parents have always raised me in a feminist manner. What really got me into it was when my mom took me to see the documentary on Hole. I had never heard of them and I didn’t really understand that sort of music since I was younger; that kind of changed everything for me.

I was probably around 11 or 12, but I was instantly so hooked—that’s what got me into Bikini Kill and all of those bands. But Hole was a big one, they really influenced my writing. I'll always go back and listen to the Live Through This album and appreciate it.

That’s great that you were able to come across that at such a young age. A lot of the time people come across those views when they’re a little older and wish that they had grown up with those ideals.

Oh totally. Not only did it influence me musically, but as a young woman at that age and in that time period, you need that kind of power and confidence. That definitely provided it for me and I would feel like a total badass. I love that we can create that feeling for young women.

Your latest release, “Poor Boy” spoke to the injustice of letting abusers run free without consequence for what they’ve done. Was there a singular moment that sparked that creative process? I have an inkling of what might have been it, but was curious if there might’ve been something else that led to it.

I mean...we’ve been angry for a long, long time.

The big thing that set the song off was the Kavanaugh bullshit. This was one of the first big moments in history that I’ve witnessed and been completely infuriated and devastated by.

I didn’t know what to do with myself; The only way I know how to cope with those emotions and the only tool I know how to use when I want to help is writing.

We were all on the same boat with that. Drew, Genessa, and I were feeling that we needed to write about it.

How did that come together in terms of the writing process? Did you bring the lyrics and then Drew and Genessa brought the other aspects of the song, or was it a more collaborative process?

Well, it’s really funny actually. We wrote a song in my garage and when we finished, I went into my house to get some water. When I came back out, Genessa was playing that riff. I instantly...literally within walking into the door, had the melody. It was kind of weird how fast that happened and then we just started to jam on it.

Then I was like, “Oh shit! That’s what this is about!”

You were also calling for donations to RAINN, which is an awesome non-profit. Do you see yourself continuing to feature any of your singles with calls to donate to an organization?

I always want it to tie in with what we’re releasing, so I’m not sure. This song specifically needed to have that tied to it. I don’t think that with every single we’re going to do that, but maybe if it makes sense with the song.

I write a monthly feature for DC Music Review called on our radar, which highlights artists who are on the rise and need more name recognition. Who’s been on your radar lately?

There’s a band called Current Joys that I’ve been really into recently. Micky James is of course amazing. There’s also a girl out of LA, her name’s this Daisy, she’s really cool.

What kind of genre would Daisy fall into?

I’d say she’s on the jazzier side.

You guys play a lot of cover songs—if you could only cover one song for the rest of your career, what would it be?

Oh GOD...oh my god...I cannot answer that! Maybe Ballroom Blitz because we’ve done it so much and it’ll always be so fun. We’re not playing it currently, but I know that will always be so fucking fun, so I’ll just go with that.