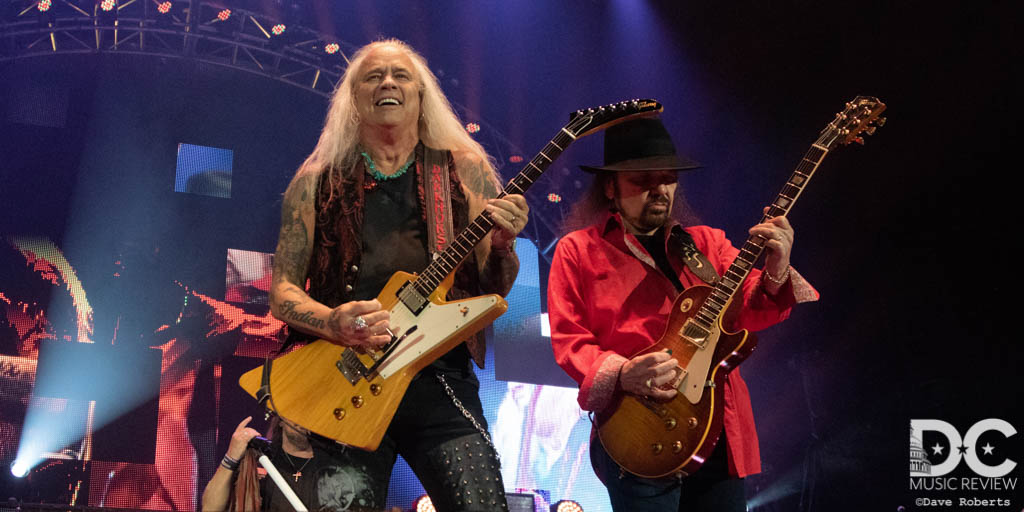 Reflecting on the evening, I was reminded of the fragility of Lynyrd Skynyrd over the years. Having grown up in the 1970s and ’80s, I was exposed to the down-home rock-n-blues that these boys masterfully helped create during the heyday of what would become known as Southern Rock. Skynyrd, with a host of other bands such as The Charlie Daniels Band, Marshall Tucker, Molly Hatchet, and The Allman Brothers, all fed into a new genre of rock that helped define a unique flavor of music. Sadly Lynyrd Skynyrd has been marred by tragedy, death, and lawsuits over the span of their career dating back to the mid-1960s when Gary Rossington (original guitarist), who is the only remaining survivor of the original line-up, met the fellows in Jacksonville, Florida. Rickey Medlocke (guitar and vocals) knew and played drums for Lynyrd Skynyrd before their first record, but didn’t become a member of the band until 1996.

With that, it is without question why the band continues performing; it’s all about the music! Continuing the legacy of the band's songs is the main focus of Lynyrd Skynyrd, night after night, playing for the Skynyrd Nation, their fans.   And play they did.

From the very first note of “Workin for MCA” until the very last note of “Freebird,” it was terrific that practically every single song was a noticeable classic. There is something about a band that features three guitars, slinging back and forth throughout the performance that grabs the concert goers, rips open their music receptacles and shreds them into little dancing pieces. Being able to sing, word for word, almost every hit all night long was such an enjoyable experience while the band jammed for nearly two hours. Combining a stellar light show with live and archived video, the staging was such a creative enhancement to the performance. Lead singer Johnny Van Zant made sure that everybody knew how much this band loved their fans, and wanted to include them in the experience of a Lynyrd Skynyrd show. Thanking the rowdy Baltimore crowd was a re-occurring scene throughout the night, and one that you could genuinely tell was from the hearts of the band.

Working through a conglomerate of classic-rock songs, Skynyrd had several definite standouts during the night. Although Rossington, Medlocke and guitarist Mark “Sparky” Matejka all contributed, it seems like the guitarists each had certain songs that became theirs to feature. Rossington drove the band through “Gimme Three Steps” while Matejka, filling the parts of Ed King to whom they dedicated this song due to his passing earlier this year, tore his way through “Sweet Home Alabama.” Medlocke was smiles all night long while often flirting with the crowd with his wild-man guitar antics. “Call Me The Breeze,” originally written by J.J. Cale, was performed like a tuned-up hot rod. Again led by Rossington, the boys all had fun on this one including a snappy piano part by keyboard player Peter Keys. There was not a soul in the house that wasn’t boogieing their tail off for this one, Awesome! And while “Simple Man” played there was lots of vintage band footage that was being played on the screen which was just incredible to see. From dedicating “Red, White, And Blue” to the country’s military, and sharing about their fundraising for the Shriners Hospital at their shows, it is apparent that Lynyrd Skynyrd is very grateful for what they have been blessed with being able to do for a living and are proud to share and pass it on. This was a very nostalgic evening of rock and roll at it’s finest; great music, great fan participation, and a vibe at The Royal Farms Arena in Baltimore that was just top-notch. The Marshall Tucker Band opened the show and helped ready the Baltimore crowd. Lead singer Doug Gray was also very appreciative in support of the Nation’s military, and led the band through some great old hits such as “Fire on the Mountain,” “Heard it in a Love Song,” and “Can’t You See.”

The Last of the Survivors Farewell Tour will continue into next year as they take their high-energy and powerful show to Canada, Europe, and the U.K. Will this tour, in fact, be the end to Lynyrd Skynyrd’s touring days, or will they join the ever-growing list of bands that have “farewell tours,” but really do stay out on the road? Only time will tell, but if this is the end of the road for Lynyrd Skynyrd, it was fantastically awesome to hear “Freebird” one last time. Click here to see the setlist for Lynyrd Skynyrd's performance at Royal Farms Arena on November 16, 2018