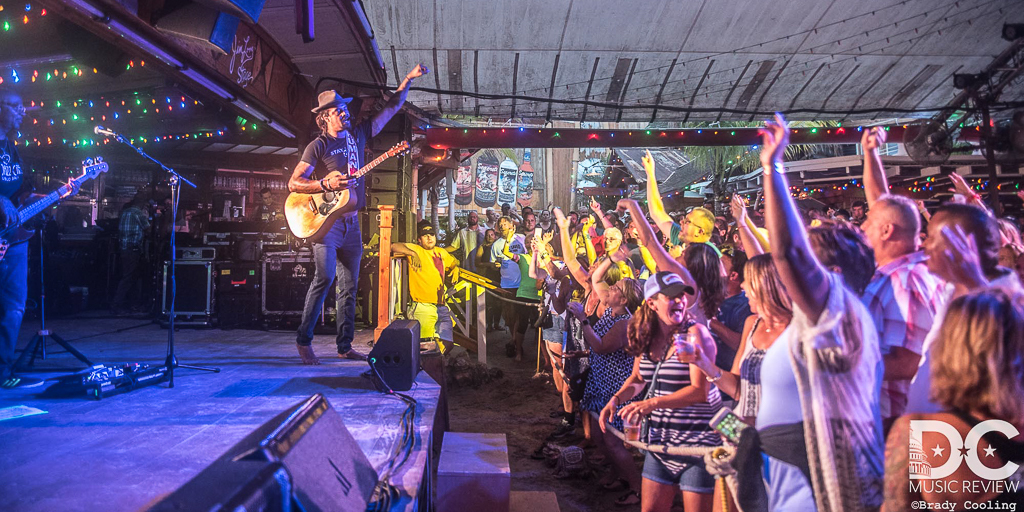 If there’s one word to describe Michael Franti, it would be sunshine. Not just because he has such a beautiful song called “Sound of Sunshine” but because of the positivity, message, and him just being a great human being all wrapped up in his aura. His songs radiate him as a being and is a contagious feeling for any concertgoer to experience. It is a connection between the soul and from the soul. It was just this sunshine and radiating positivity that Franti brough to Seacrets in Ocean City, Maryland on July 24. Early in the show Michael Franti and his amazing band Spearhead mentioned their charity they have been founders of called Do It For The Love which is based on one of his songs of the same title. They bring children who are facing life-threatening or terminal illnesses and bring them to concerts or entertainment events free of charge, whatever artist or event the child wants for their families as well. Front jokingly remarked, “I never thought I would be buying this many Taylor Swift tickets, but I have and would buy a million more I could.” This is yet another great reason why I love Franti and who he is so much.

Franti has played Ocean City at Seacrets for his third consecutive year on the beach stage, which truly gives the right feeling and vibe for one of his shows. Being right by the Assawoman Bay and wedged close to the Atlantic Ocean in the summertime is the perfect place for any reggae or feel-good music! I’m so glad the area has such good artists and music throughout the summer. Like any show of Franti’s, he brings up people from the crowd to dance and sing and he also goes into the crowd to give it a special type of energy and intimacy. One that is only captured by him and his presence; truly magic. If you aren’t happy at a Franti show then you need to keep listening and hopefully you will be by the end! Anytime an artist can interact with the audience and make them a part of the show and have that connection makes a performance that much more unique and memorable. His songs just flow so nicely from one to another and all touching on different meanings and ideas. He has always been outspoken about his political beliefs and the state of affairs in our country, and he is a spark of light and hope in the world through his powerful music and activism. The takeaway I got from the “Be Human” tour and his message is to do exactly that, to be human and not apologize for who you are in the eyes of others. Everyone has things about them that are good and bad, but it is up to the person to decide how they want to be and live regardless of their flaws. His tour features two amazing women who have joined him and play a very similar vibe and spirit he has as well. Hirie and her amazing band and Victoria Canal as well. Hirie is an artist I’ve seen before and she expresses the goodness that Franti does too, a very unique island style reggae mixed with some funk and even jazz sounds with a great full piece band. She mentioned that she is terrified of public speaking, yet she is a musician who plays in front of people every day and has been able to get better and overcome this and is human who has the same fears and challenges as others.

Victoria Canal is a pianist and young female singer who was discovered while she was in college through a direct message that Michael sent her on Instagram. He was so inspired by her story and music and asked her to go on tour even though she had no idea who he was really. She was born without an arm and has still been able to face this adversity and play piano and be herself and be such a great musician and person from it. This whole show had so many feelings and emotions of people just being human and doing what they love, and was truly inspiring. If you at all can go see this show I would recommend it highly!

To learn more about Do It For The  Love please click on the logo below.