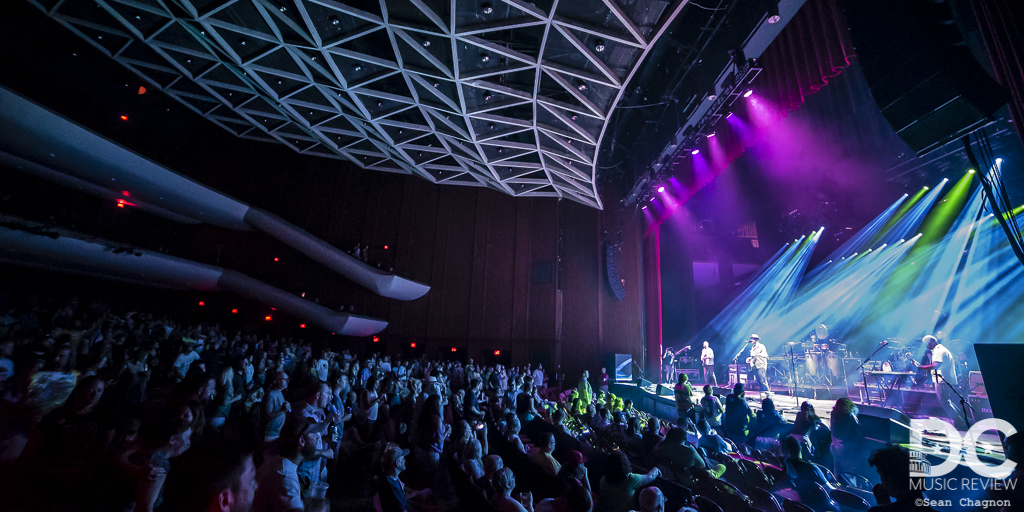 Jam rock veterans moe. don’t often make it through the Hampton Roads area of Virginia, so when they do, it’s an opportunity locals pounce on. This year’s tour was especially tempting with the addition of Blues Traveler and G. Love to the bill.  Despite the mid-Atlantic summer heat, catching a show at the Portsmouth, Virginia Pavilion is usually pleasant given its location on the Elizabeth River and the cool evening breezes that blow off of it. Due to recent structural issues with the pavilion’s roof, it appeared that this show wasn’t going to go down, but promoters kept it going with a venue change to Norfolk’s Chrysler Hall. The new location is generally home to music of a more classical nature, but on occasion it is graced with the sounds of rock’n’roll and this tour stop definitely left it’s mark on the venue. Philadelphia’s own Garrett Dutton, a.k.a. G. Love, started the night off with a solo acoustic performance in a throwback to his old days of busking on the streets of Philly. G’s old school blues sound may not be perfectly polished, but that unique sound is what gives him that old school cool that is absent in music today. He covered songs from his newest single and hit on older tunes like I-76 and Cold Beverage from his debut album. It’s evident that he is putting his soul into the music and he appreciates the ability to perform for his fans. Blues rockers Blues Traveler hit the stage next with gusto. They established that this was not going to be a mellow set almost right out of the gates. While covering the fan favorites such as Hook and Runaround, the band delved into some long jams which allowed lead man John Popper to tear into his signature screaming harmonica solos and trade licks with lead guitarist Chan Kinchla throughout their set. There were rumors that Blues Traveler was joining forces with moe. between their sets and lucky for the audience, they weren’t just rumors. Members of all parties were swapping in and out for a few songs before Blues Traveler took their leave of the stage. Hailing from upstate New York, moe. is no stranger to the jam scene. Their festival, moe.down, which is on its 17th year was held July 4th weekend in upstate New York and included the likes of the Drive-By-Truckers, Spafford, Vulfpeck’s Cory Wong, and Boston’s Haley Jane and the Primates. In true jam band fashion, they took to the stage with a relatively short playlist, but took the songs to places that don’t get heard on studio recordings. Opening up with fan favorite Captain America drew the crowd in and moved on to the catchy All Roads Lead to Home. Other highlights were Head, a twangy Bring You Down, and the guys finished out the set with the rocking Bearsong encore to finish out a great night.

moe. has a few more dates on their tour in the Midwest, North Carolina, and Georgia before heading to Lockn’ for an amazing weekend on the farm!