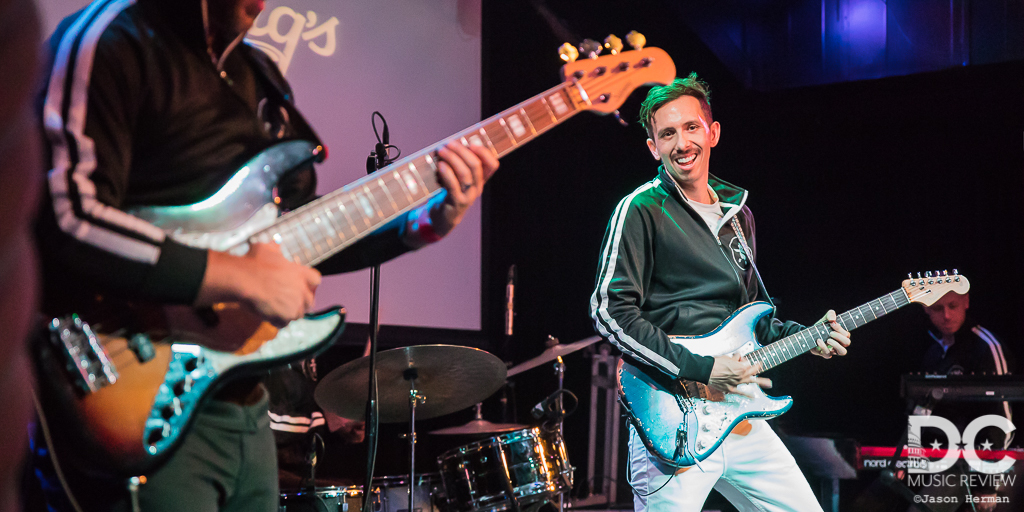 Cory Wong kicked off his solo tour Tuesday night at Jammin Java with not only a great performance, but also a valuable music lesson or two.  Wong joked throughout the performance about teaching the audience important elements about musical compilation, some funny, and all ridiculous.  Having a new album that drops Friday, Cory was excited to get to play his new music live and also have copies of the record on vinyl available for purchase. Cory opened the show with a declaration that he was sacrificing his body by wearing white pants and a slim mustache in order to gain the attention of Dave Koz, whom Wong had spoken of a desired chance to collaborate with in his earlier interview with DC Music Review.  What he had failed to mention was that Koz had his own smooth jazz cruise and that was a highlight as Wong used images from the cruise as a background to the opening song of the show.

Hard to know when to take him seriously while talking, audience members laughed along with him while he went on to explain very important elements of live performance.  There was the ‘chicken wing’ which means that a keyboard player is getting really into the music.  ‘Tanging the hump’ is what drummers do to the high cymbal about ’17 minutes into a jam band song’ and then there is the sheer hilarity of his other associations to things like yoga.

A true entertainer, we might not have known when to take him seriously about the instructional side of the night, but the man was all business when it came to absolute annihilation of the lead guitar and first night of tour.  He shared the news that his drummer missed his flight but that he was able to find a fill-in, also named Cory who, we later found out, just so happen to also be a second cousin to Wong. These cousins shared an intese musical passion and talent and only learned of each other very late in their teen years.  Quite ironic, as he was also supported by Kevin on the keys and Kevin on guitar.  The Corys and The Kevins, as Wong named the new supergroup, were the hosts of the encore and after party as well and you couldn’t help but be impressed with the way the drummer performed being that he wasn’t part of the original plan. The optimist, Cory Wong, enjoyed every minute on stage.

Wong’s unique style of guitar playing tore through Jammin Java and kept a crowd that ran a long distance of age moving through every song.  His appeal and ability to show how much fun being onstage is for him carried out through the audience as well, showing that Cory is a true entertainer.  After ending the show, chants of ‘Cory Wong’ echoed throughout the venue and brought him back onstage for a brief solo shred.  Mentioning that everyone forgot to chant for the rest of the band, all members eventually joined him as well and ‘The Corys and The Kevins’ brought it home with a strong ending, even inviting Jacob Sigman, the opener, onstage to sing Prince’s ‘Wanna Be Your Lover’ along with them.  Happy to stick around and talk to folks afterwards, about a third of the people in attendance jumped at the opportunity to get to talk to Cory and other members of the opening and main act band, leaving the merch table buzzing for a whole nother hour.

Despite all that Cory Wong desperately wanting to go on the cruise with Dave Koz, it looks like this event is sold out.

Look for Cory Wong to continue seeking Dave Koz's attention and  impressing him.  Perhaps we can all cruise with Cory and Dave in 2020!