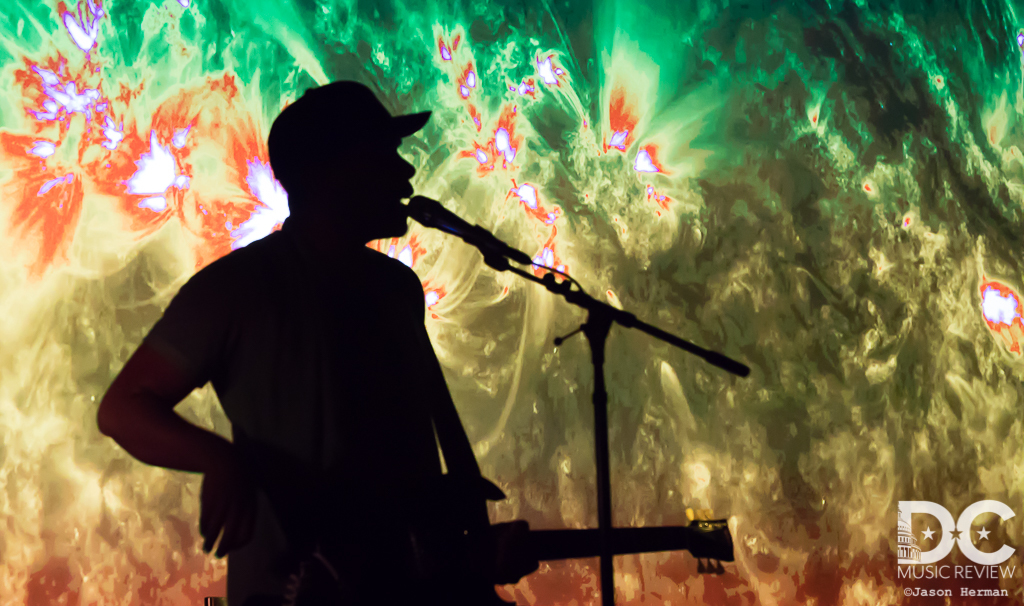 Clad in all black, Austin native Mobley took the freshly minted City Winery DC's stage Friday, May 4th. The stage was decorated with everything from a drum kit, a keyboard, a guitar, and a microphone. The audience puzzled as to how one man could be responsible for them all. The somewhat hushed and humbled persona that Mobley embodied in the green room prior to the show all but melted away as he kicked off his opening set with “There Is No Frontier.” One-man-band wonder Mobley came alive onstage and stunned the unsuspecting crowd with a too-short setlist of indie-pop experimental magic. He flitted from guitar to keyboard to drums and back, all the while playing electronic mixes in front of cleverly crafted video graphics.

City Winery couldn’t contain Mobley, whose sound and energy transcended the quaint venue. For older track “Seven Summers,” Mobley got interactive, telling the audience, “I’m normally very demanding of my audience, but there are a lot of tables in here.” He compromised by placing a spare drum on a vacant seat, passing out drumsticks to those lucky enough to snag seats in the front row. In addition to those in the front row, Mobley required everyone else to bang on their tables. He encouragingly said, “You don’t have to be too civilized!” before quickly backtracking to add “don’t break anything though.”

Despite the somewhat confining venue, Mobley was able to get crafty in order to enhance audience participation. Before “Stay Volk,” Mobley called up four eager volunteers, whom he then proceeded to hook up to an array of wires. Turning to the audience, Mobley excitedly explained that he had invented a “human drum machine.” When he clapped any one of the volunteer’s hands, a resulting drum or cymbal sound would follow. It was unlike anything I’ve ever seen before. The volunteers couldn’t help but dance along to the edgy track, giving a glimpse of what a true Mobley concert would look like if everyone was able to stand and be apart of the music.

Mobley's open-minded and creative sounds show that music and art can really be found anywhere if you’re paying attention. Click To Tweet

Mobley’s music is modern and fresh, with his songs building upon one another, additional layers and textures consistently added. Having studied film and linguistics in college, Mobley was responsible for all the graphics during his set, which featured video clips as well as original graphics. “Tell Me” featured a car driving down an endless highway, which was reminiscent of the opening scene of Mulholland Drive (dir. David Lynch, 2001). With the keyboards hidden in shadow, Mobley faded into the darkness when he played, thus drawing attention to the multimedia video graphics. Everything he did appeared intentional and well thought out, and it was all executed seamlessly. Tracks like “Young Adult Fiction” and “Torch” were highlights of the night, and also exemplary examples to display the variety in his sound. The former is a heavier and more sultry track that showcases Mobley’s instrumental and mixing skills, wherein “Torch” allows his vocals to take the front seat.

Although his recorded music is unmatched by any other band, seeing Mobley perform live is an experience in it of itself. Mobley can make an instrument out of almost anything, including a blow horn, and even by shouting into the belly of his guitar, along with other new sounds that I can only speculate as to how they were made. Mobley's open-minded and creative sounds show that music and art can really be found anywhere if you’re paying attention. His music is genre-bending and something to pay attention to.

Mobley is definitely one to keep on your radar. Currently on tour with Bob Schneider, we expect him to achieve massive successes on the festival circuits soon. Mobley is currently on tour supporting Volume I of his latest musical project Fresh Lies.

This is one show  you won’t want to miss. Your next chance to see Mobley will be at Jammin' Java on July 16. Mobley has been working and re-working Fresh Lies, Volume I since 2013. Make sure to support his hard work and ​purchase his record here.

Click here to see the setlist for Mobley's performance at City Winery DC on May 4th, 2018

1. There is No Frontier