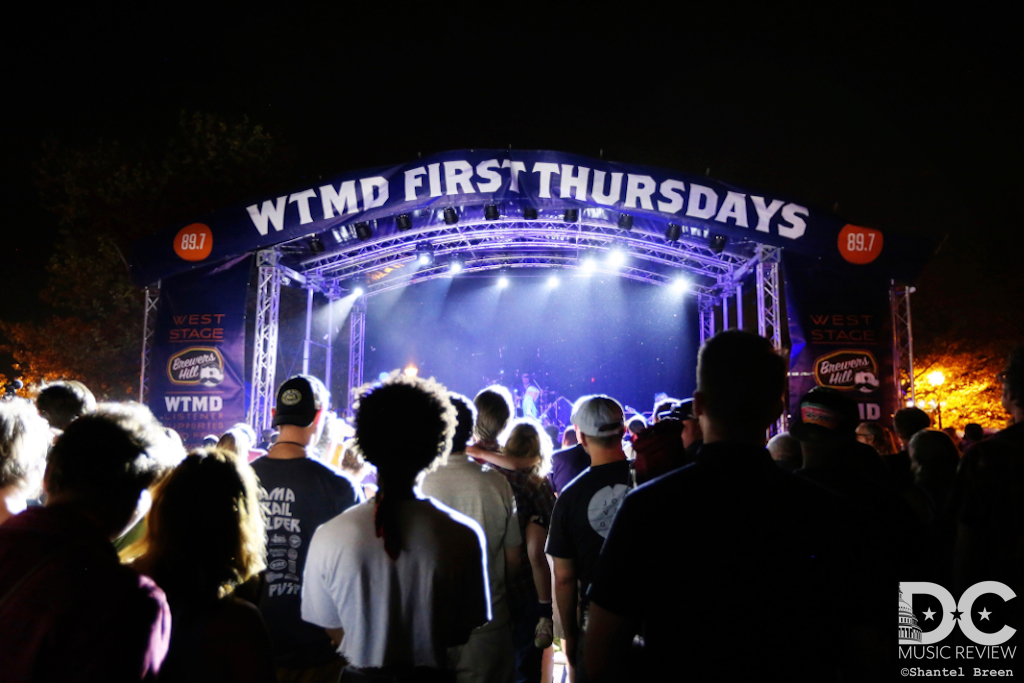 Baltimore’s alternative radio station, 89.7 WTMD, kicked off their First Thursday Concert Series on May 3 at Canton Waterfront Park in Baltimore.  This was the first of 5 free concert series presented by Brewers Hill that will take place on the first Thursday of each month from May through September.  Summer-like weather brought out quite a crowd of music lovers this past Thursday. Fifteen food trucks provided a variety of food choices including roasted corn, rice bowls and oysters.  In addition, Brewers Hill provided several beer tents throughout the park.  Bands performed as the sun set on the Baltimore Harbor, which provided the perfect backdrop for this outdoor concert. First to take the West Stage was the band, Loma.  Those who arrived early, were treated to a dreamy and melodic set of songs from Loma’s debut album.  Following Loma, Low Cut Connie, took the stage.  This Philadelphia based rock band energized the crowd with a dynamic performance of guitars, pianos, and soul.  Low Cut Connie’s front man, Adam Weiner, drew the crowd in with his charismatic energy and stage presence. Headlining this First Thursday was the alternative rock legends, Belly who were performing their first show in over 20 years!  It was evident that many people came out to see this performance.  The crowd cheered loudly, and gathered closer, as Belly took the stage. Their set included songs from their 1993 album, Star, as well as new songs from their 2018 release, Dove.  Everyone sang along to "Slow Dog", "Gepetto", and "Feed the Tree", to which lead singer, Tanya Donelly, joked with the crowd saying, “We could play this song in our sleep!”

All band members looked as if they were having a great time, smiling and laughing on stage.  Fans will get another chance to see them perform as they will be stopping by the 930 Club on September 29.

Special thanks to WTMD and Brewers Hill for putting on a wonderful free concert at Canton Waterfront Park!  We cannot wait for the next one!