The National Performs at The Anthem 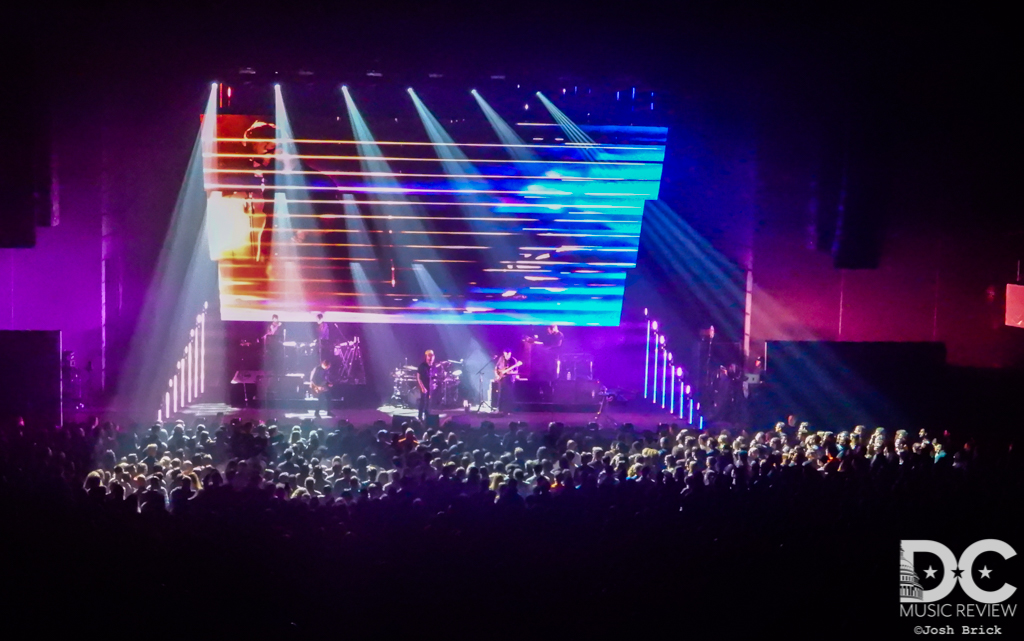 The National delivered a powerful two-hour set last week at The Anthem, displaying both the musicianship and propensity to deliver emotionally-charged performances which have come to be the band’s calling cards. Described frequently as “America’s Radiohead,” The National have become critical darlings while steadily building a loyal following, all despite a lack of radio hits. Such reverence for the band was certainly on display at the elegant, recently-opened Anthem on December 5th, as the sold-out crowd of over 6,000 enjoyed The National’s unique ability to effortlessly glide between diverse moods and tempos. Armed with music from a discography that now spans seven studio albums since their inception in 1999, the band seemed to be inspired by the current political climate and the very city which they were playing in - often an inevitability when socially-conscious bands play shows in the nation’s capital. As a result, singer Matt Berninger interjected choice words - to put it kindly - for the current administration at certain points in between songs, and as the evening went on, the band played with an urgent energy reflecting a spirit of protest. Berninger would even “dedicate” songs to political figures such as Karl Rove and Senator Rob Portman throughout the course of the night.

Things got off to an unexpectedly rocky start, as the band was forced to cut short its opening song - the rarely-played Boxer b-side “Santa Clara” - after two attempts which didn’t make it through the first verse. Sounding as though he had been battling a cold, Berninger expressed some frustration, but ultimately laughed off the miscues as he turned to his bandmates and motioned them to move on to the next song. The band kept the mood low-key with their second song in the set, “Nobody Else Will Be There”, which was led by Aaron Dessner’s (guitar, keyboards) somber piano parts, before ramping up the energy with “The System Only Dreams In Total Darkness,” another cut from the recently-released Sleep Well Beast. The latter tune showcased a catchy, uplifting guitar solo from Bryce Dessner (guitar) and allowed Bryan Devendorf (drums) to propel a song with his innovative drumming for the first time in the set.

While the evening’s set emphasized tracks from Sleep Well Beast (9 of the album’s 12 tracks were played, with four of the first five songs of the night coming from the new LP), the band still managed to curate the setlist with several crowd favorites from other recent albums. The most well-represented were Trouble Will Find Me (5 songs) and High Violet (4 songs), which are arguably also the band’s most critically-lauded works. Standout performances from the evening included “Conversation 16,” “Graceless,” and “Mr. November,” with the show reaching exhilarating heights during main set closer “Fake Empire” and “Terrible Love” in the encore.

The band’s seeming dichotomy of restrained introspection and urgent passion was most evident toward the end of the show. Berninger dedicated “Carin At The Liquor Store” to his wife, while the unreleased-yet-crowd-favorite “Rylan” kicked off the encore. Both songs are ambient, piano-led, and feature subtle guitar work - but both pack an emotional punch lyrically. Meanwhile, The National brought an almost arena rock feel with both “Turtleneck”, a frantic, hard-rocking number, and the aforementioned “Terrible Love,” which had the Dessner brothers and Scott Devendorf (bass) turning the guitar distortion way up for an epic ending section to the song.

Explaining The National’s sound to those unfamiliar with the band is a difficult task. The group’s music is diverse, and during a concert, the band can stop on a dime and change its sound from one song to the next. But it’s also hard to pinpoint what makes the music so appealing to those who enjoy it. Berninger himself can be an enigma, balancing his self-admitted stage fright and anxiety with his charisma and ability to captivate an audience, as evidenced by his multiple forays into the crowd and his piercing yells during several songs - cold and all. In the chorus to “The System Only Dreams In Total Darkness”, he sings, “I can’t explain it / Any other, any other way.” Berninger may not be able to explain The National’s appeal, the precise meaning of their lyrics, or what makes them such a dynamic live band. But he and his bandmates let their music do the talking. Indeed, they can’t explain it any other way.

Click here to see the setlist for The National at The Anthem on December 5, 2017

2. Nobody Else Will Be There

3. The System Only Dreams in Total Darkness

12. The Geese of Beverly Road

18. Carin at the Liquor Store

4. The KKK Took My Baby Away (Ramones cover)

Enjoy our photo gallery from this performance from our photographer Josh Brick of Josh Brick Graphics.