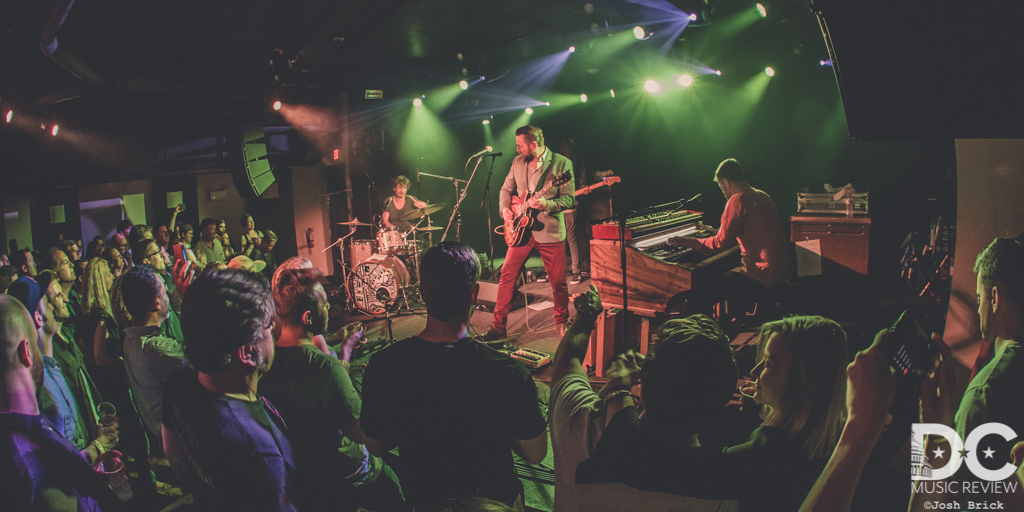 British funk quartet, the New Mastersounds, stopped in Washington, DC this week as they tour in support of their new album Renewable Energy, playing a headlining gig at the Southwest Waterfront’s newest music venue, Union Stage. Performing in the small basement venue – that smells like fresh pizza all night – on Tuesday, May 8, DC fans that made it out were treated to an excellent show that kept the crowd moving all the way through. With support from DC’s Backbeat Underground, the two bands combined for a lively weeknight dance party.

Backbeat Underground, who describes their music as a soulful blend of funk and jazz, provided a dynamic opening set. The six-piece outfit set the tone for the evening with an energetic set of instrumental tunes. Backbeat Underground’s two-piece horn section amped up the audience, making sure that the crowd was primed and ready for a show that would keep everyone dancing until the bitter end. By the time Backbeat’s set finished, everyone in the room was limber and ready for the main event.

The New Mastersounds opened their set with up-tempo tunes to keep the energy raised before shifting gears with the slow funk of “MRG.” Marked by the lead guitar riffs of Eddie Roberts, this song also featured the pianist/organist, Joe Tatton, tickling the ivories with an outstanding piano solo. Next, the band played “Green Was Beautiful,” off their new record because, as the band said, “we’re going to try to sell that to you all evening” because carrying the vinyl on tour “is very heavy and inconvenient, so even if you don’t have a turntable you should buy one out of guilt.”

The witty banter and the song were sure to sell a few copies, as this tune wound through sections of infectious hooks and frantic solo work by Roberts. The tightness of the band was on full display as the rhythm section of Pete Shand and Simon Allen held the pocket together for their bandmates on bass and drums, respectively. After declaring, “this one’s more chill,” the New Mastersounds throttled down for another new tune, “Pudding & Pie,” highlighted by smooth piano leads from Tatton, who eventually spread his wings to play both piano and organ simultaneously.

“Groovin’ on the Groomers” offered a playful, booty-shaking jam featuring some whistling to kick things into high gear and “Take What You Need” allowed Shand and Allen to shine, with Roberts giving them space to solo, contributing with a tambourine, while Tatton provided light organ accompaniment. When Roberts switched back to guitar, digging into dirty funk with his wah pedal, and the band brought the song to a rousing peak, the floor vibrated as the bass lines overtook the room.

The down-tempo funk of “This Ain’t Work” evokes the New Orleans funk style of The Meters and served as a great breather after a thrilling run through the intense, minor-key jazz exploration “Yokacoka.” Tatton moved to clavinet for a raucous solo in “You Got It All” that served as the climax of the show, which would then start to wind down, later featuring a unique instrumental cover of “6 Underground” by Sneaker Pimps. The band revved back up with “San Frantico” and finished the show with “Baby Bouncer,” putting an exclamation point on a fun and fantastic performance.