Leftover Salmon Brings a Little Light To The Baltimore Soundstage 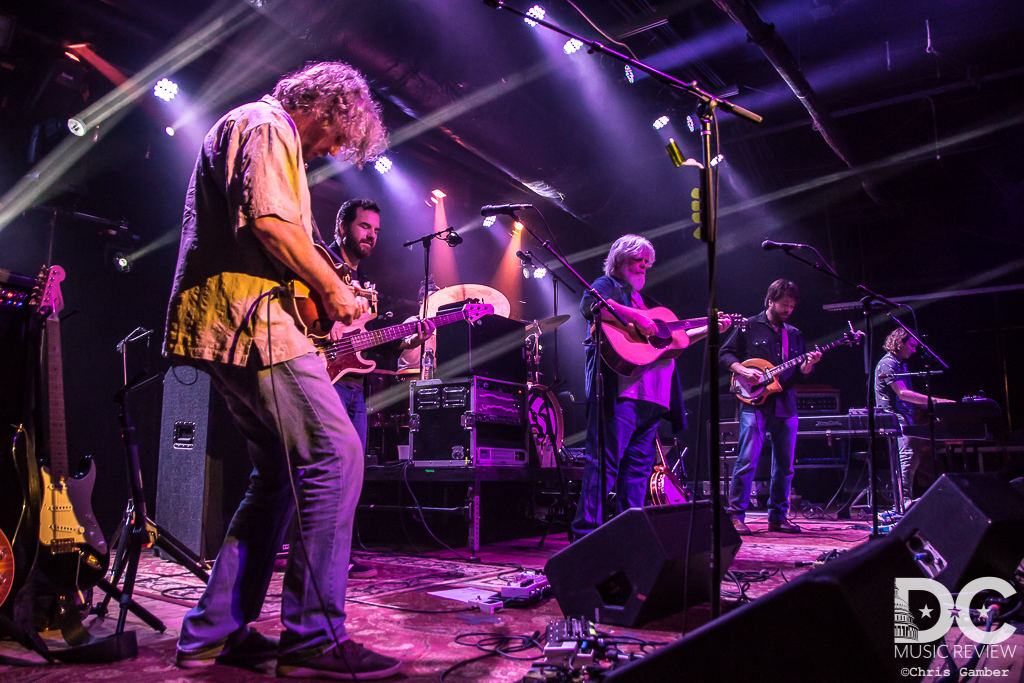 This past Wednesday, May 9, Leftover Salmon appeared at the Baltimore Soundstage on their Something Higher tour, asserting that even after 25 years they still have more musical magic up their sleeves. Opening for the Jamgrass legends, The Dirty Grass Players  took the stage first, and just seconds later, the foot-stomping began. These guys know bluegrass, and I highly recommend checking them out if the opportunity arises. The up and coming Baltimore based band has been steadily gaining more exposure over the last couple of years, and it is indeed well deserved. Performing traditional bluegrass favorites, originals and even covers of Ween's "Roses are Free" and Pink Floyds "Time," the audience couldn't deny the energy and fun this band brought to the stage. At the end of the set, Leftover Salmons banjo player Andy Thorn joined them on stage for an improvisational jam that was on fire with dueling banjos. Thorn remained on stage for the last song, in which the band showed off their harmonizing skills with the children's classic "John Jacob Jingleheimerschmidt." Leftover Salmon has been touring on and off since 1989. This particular tour, appropriately titled "Something Higher," revealed how tight and eclectic this collaboration of musicians truly is. Led by Vince Herman on vocals and guitar, the set soared from start to finish, showcasing some of the finest solos I've had the pleasure of hearing by each member of this extraordinary group.

The set started out with classic "Steam Powered Aeroplane" which rallied the crowd immediately with the upbeat picking of Andy Thorn on the banjo, and the first of many sizzling keyboard solos by the bands newest member Erik Deutsch. Next up, Drew Emmitt demonstrated his picking skills on the Mandolin with the Zydeco sounding tune "Liza", followed by "Gold Hill Line" which had a more traditional bluegrass feel. As the music progressed, the spectators were introduced to some new songs off of the Something Higher album which was released just this month. Holding true to their bluegrass roots, the songs started out very traditionally styled and transcended into some powerfully psychedelic jams. About three quarters of the way through the set, Greg Garrison layed down the bassline to the Beatles classic "Come Together" which sweltered into an all-out instrumental extravaganza of funky guitar licks and keyboard solos before progressing into an amazing drum solo by Alwyn Robinson that continued to ascend all the way up into "space". Very reminiscent of the Grateful Dead, there were a lot of fun sounds and noises flowing through and eventually the entire band reconvened on stage and led out of space with an unparalleled banjo solo by Thorn which turned the entire dance floor into an old-time ho-down. Afterwards, they mellowed it out a bit with a softer new tune, "Southern Belle," but instantly picked the pace back up and ended the long set with one hell of a bang as Deutsch pounded his keyboard like Jerry Lee Lewis. This ditty ended the extended set and the band filed off the stage only to return moments later.

Vince Herman was the first to come back on and started the encore with a very impressive guitar solo that led into "Let In A Little Light", my personal favorite off the new album with it's gospel-like chorus and unforgettable message. The onlookers danced and chanted along with the tune but the standout moment came as Deutsch began playing a hefty solo on the melodica just reassuring that Leftover Salmon definitely has plans for "Something Higher" in their future. Fans were having the time of their lives.

Throughout the entire set one could hear influences of blues, southern rock, bluegrass and zydeco all tying together with psychedelic jams that blew us away as spectators. What we heard was the reinvention of "jamgrass," and there is no doubt in my mind that Leftover Salmon will continue to ascend. Click here to see the setlist for Leftover Salmon's  performance at The Baltimore Soundstage on May 8, 2018.

12. Light Behind The Rain Notes:  [1] New Song from Something Higher