Oteil and Friends Come to the Baltimore Soundstage on November 8th 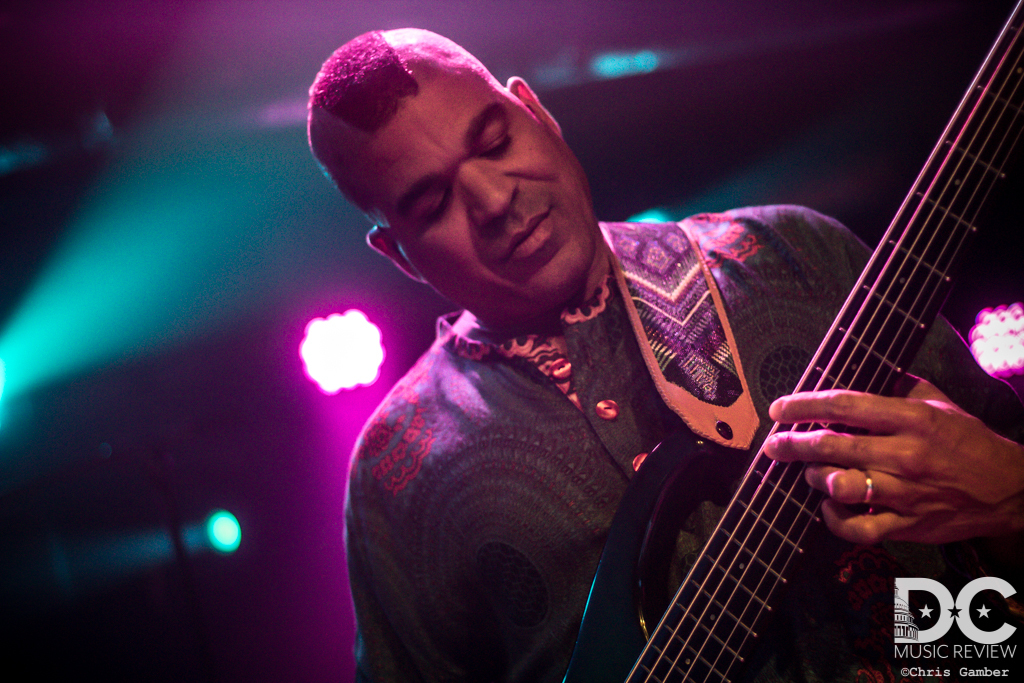 As people filled the venue one could not help watching a small forest of microphones steadily growing beside the soundboard. One by one the microphone stands appeared above the foliage of the crowd until a healthy thicket of ten microphone stands stood tall.  Sometimes you can sense the excitement and enthusiasm for a band by the number of microphones that hum with anticipation.

At 8:30pm Oteil and his musical friends took to the stage.  From the very first song, a soulful “Water in the Desert”, the septet of Oteil Burbridge (bass, vocals), Melvin Seals (keys, vocals), John Kadlecik (guitar, vocals), Eric Krasno (guitar, vocals), Jay Lane (drums), Weedie Braimah (percussion), and Alfreda Gerald (vocals) set the mood that tonight’s performance would be energetic, collaborative and spirited.  By the end of the first song, after a heartfelt and beautiful organ solo by Melvin Seals and powerful vocal performance by Alfreda Gerald, the audience settled in for what would be a memorable night of music, exactly the way a final night of a tour should be.

Special guest Ron Holloway, a Washington DC native, showed up to support Washington DC native, Oteil Burbridge and John Kadlecik who also call the Washington DC Metro area his home. Holloway would lend his musical genius to several songs throughout the evening including one of the more memorable versions of the Grateful Deads' “Eyes of The World” audience members could recall.

Editorial Note: Jason Herman was in attendance for the April 29, 1990 show in which Branford Marselis performed “Eyes of the World” with the Grateful Dead. To him this version may be the second best woodwind accompaniment to the song he has witnessed.

Tonight marked the end of the “Oteil and Friends” short tour. Despite this being a newly formed band, the interplay between these experienced musicians was evident and it felt as though this band had been performing for years touring together. Guitarists John Kadlecik and Eric Krasno spent the evening oscillating between rhythm and lead guitar laying out a steady progression of guitar solos and melodies.  At other times Kadlecik and Krasno would duel it out trading guitar lick for guitar lick.   All the while, a clearly happy Oteil Burbridge - oscillated from side to side, head down and with a smile on his face - filled in magical bass lines as Melvin Seals interjected eloquent organ and piano pieces.  Meanwhile, Jay Lane and Weedie Bramah kept a steady rhythm and kept the piloted backbeat of the songs.  Alfreda Gerald, earned the moniker Oteil had placed on her “The Queen” as Queen Gerald held court in Baltimore with her energetic, soulful and powerful voice throughout the evening.

The Baltimore Soundstage was buzzing with kinetic and musical energy throughout the evening and audience members who are normally accustomed to moving throughout the floor had to navigate by using the raised viewing platform at the back of the Soundstage.

Oteil announced to the audience that this performance was the last night of our tour, but not their last tour.  This was greeted by a thunderous applause by the audience.

The evening was filled with a wide array of musical talent and tones.  Sometimes guitar solos would evoke feelings of syrupy honey while others were reminiscent of “Four Dead in Ohio” by Neil Young.  Some songs drifted into Caribbean, Soul, Blues, and Motown undertones and directions.  As quickly as the musical sand shifted in throughout the evening, the band continued to play tightly and ever connected.

As the show was winding down Oteil couldn't help but tell the audience, “I hope you guys feel as good as you make us feel. Thank you, thank you, thank you!”  As the band took to the stage for their encore Oteil announced, “We are going to do one more for you. We are going to try to burn the place down.”  Soon after Gerald whipped the audience into an excited frenzy with a memorable version of Creedence Clearwater Revival's “Proud Mary.”

After the performance, Oteil spent considerable time at the back of the venue alongside John Kadlecik autographing tour posters, taking selfies, and shaking hands with very appreciative fans.  Oteil would be jetting off to California the following day to embark on an indoor stadium tour with Dead & Company and was clearly and genuinely enjoying meeting and interacting with his fans face to face.

​DC Music Review, as well as all of Oteil's fans, look forward to the future Oteil & Friends tour.

1. Water in the Desert

2. Leave My Blues at Home (The Allman Brothers Band cover)

5. If I Had the World to Give (Grateful Dead Cover)

6. The Weight (The Band cover)

2. Stop That Train (The Wailers cover)

(with I'll Take You There snippet)

Performance recording is available with very special thanks to Alex Leary