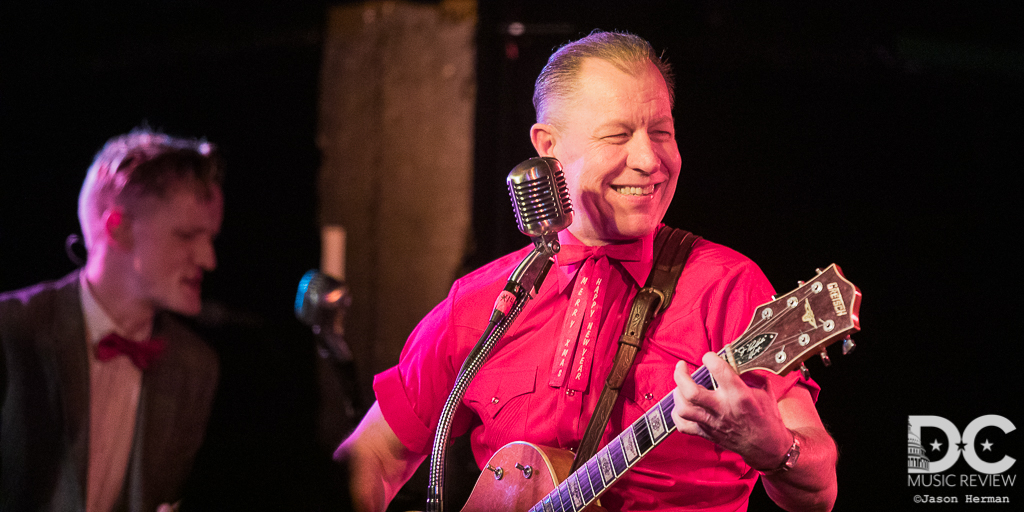 A Texas tornado touched down in Washington, DC during the worst of the rainstorm on December 15. Who knew that inside the eye of this storm was none other than Reverend Horton Heat and his barnstormers of rockabilly royalty performing at The Reverend's 2nd Annual "Horton' Holiday Hayride."

Despite the constant rain throughout the region, each attendee felt an immediate relief the moment they stepped foot inside The Black Cat's performance hall, which was near capacity, filled with the blissful and bustling energy of rockabilly. The mere thought that Washington, DC does not have a passion for rockabilly was immediately cast aside as the sound of hollow body guitars and upright basses flowed freely throughout the venue. The venue was filled with an eclectic group of concertgoers. There was the classic tattoo flash art, synonymous with the 1950’s rockabilly, with colorful pinups and hearts galore. Adding to the diversity of the audience were the psychobilly and punk influences that included nose rings, ear gauges, and brightly colored hair. There was one singular thing that connected everyone: a deep and inherent love for this timeless music. This connection was confirmed throughout the evening as visceral swoons and delight appeared as familiar songs of Albert King, his contemporaries, and rockabilly permeated the hall.

DC Music Review spoke with audience members about who they were there to see. A familiar response was that concertgoers were there to see all the artists and not just the headliner — reinforcing that this evening was a who's who of touring rockabilly. Many fans recalled the last time they saw The Blasters, Junior Brown, Big Sandy, and Reverend Horton Heat, and how excited they were to see them all under the same performance. At 11 PM, Reverend Horton Heat hit that stage. From the first note of "Baddest of the Bad" to the last note of their two-song encore of "It's Martini Time" and "School of Rock and Roll," Jim Heath and his band showed why Heath is the godfather of psychobilly. For over an hour and a half, The Reverend Horton Heat band played classic hits including "400 Bucks”, "Galaxy 500", and "Big Red Rocket Of Love" in addition to songs from their latest album Whole New Life.

For thirty plus years, The Reverend Horton Heat has toured America and the world over. Although some band members have come and gone there is one thing that remains consistent: the passion and consistency of this band's lineup headed by Jim Heath. The Reverend welcomed the newest members of the band, with RJ Contreras on the drums, and bow-tie, face making Matt Jordan on the piano. During the introductions, there was one person Heath forgot to mention, the one and only Jimbo Wallace on the standup bass. After a brief chant of "J-I-M-B-O" by the crowd, Heath introduced Wallace and the two bandmates of nearly 30 years exchanged instruments as Jimbo played guitar on "Run, Run, Rudolf" as the Reverend did his best to replicate Wallace's backbeat groove on the bass. After scorching through several classics, and playing a blistering solo while standing on top of Jimbo’s trusty bass the heat was too much even for The Reverend. The show slowed down for a minute as The Reverend took off his jacket and started to tell stories of his early touring days. Heath recalled the days where he saw The Blasters and Junior Brown for the first time and how they influenced him and his sound. The Reverend was all too ready to show his genuine love, gratitude, and appreciation for each artist sharing the stage that night and none more so than Big Sandy, whom with he shared half of his performance. Big Sandy himself was gracious to acknowledge the contributions of DC natives in pioneering rockabilly days.

What made this evening's performance by Reverend Horton Heat particularly special was the seasonal favorites performed by the band to put everyone in the holiday spirit. This included "Rudolph the Red-Nosed Reindeer" and "Santa on The Roof" from their 2005 album, We Three Kings: Christmas Favorites. "Run, Run, Rudolf", made famous by Chuck Berry, also made an appearance and the evening ended with another Christmas classic "Silver Bells".

As midnight came and went, the crowd thinned just enough that several couples took advantage of the extra space at the rear of the venue and started to swing dance. As the night drew on, poodle skirts continued to twirl in the air, and men's shirts came off revealing sleeveless undershirts and exposing more beautiful arm and back tattoos. Big Sandy sharing the stage with The Reverend

Big Sandy sharing the stage with The Reverend

DC Music Review had an extraordinary evening of music with The Reverend Horton Heat and all the supporting artists. We can only hope that this time next year DC Music Review can attend the 3rd Annual Horton Holiday Hayride for a long evening of the very best rockabilly performances you will see in a single evening.

Wishing you all a very Reverend Rudolf Christmas and a Horton Hayride of a New Year! To learn more about the artists performing at The 2nd Annual "Horton Holiday Hayride" please see the following: