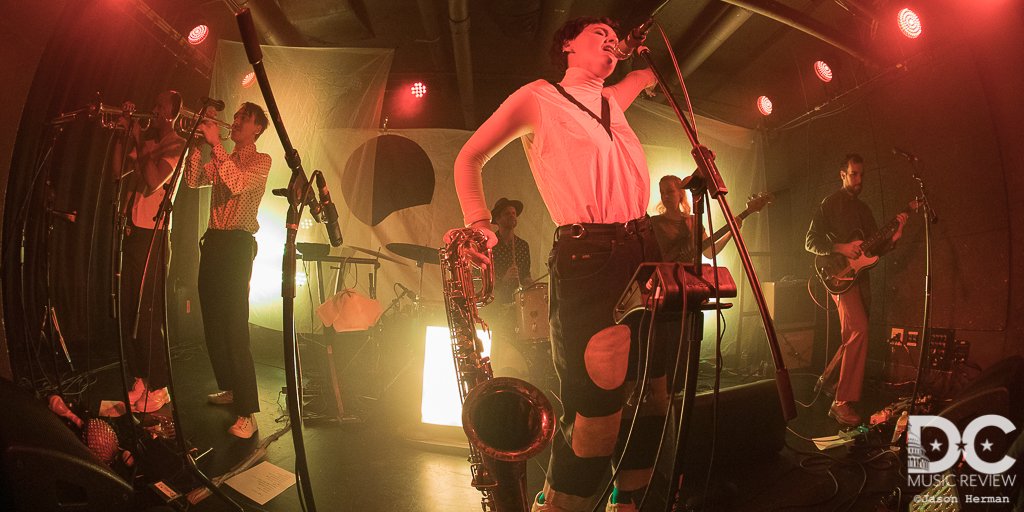 Somewhere in the middle of the joyful parade of musicians winding its way through the audience during “Came Out of a Lady”—singer Kalmia Traver leading like some exuberant drum major and dual trumpeters following behind with one saddled up on a fan’s shoulders—dreamy art-pop band Rubblebucket broke the fourth wall and entered the realm of wild, surreal spectacle.

Awkwardly big synchronized dance moves peppered the set, like the trumpets and bassist spinning 180-degree hops every four beats, and two songs later Traver donned an enormous white rose strapped to the side of her head like some sort of bizarre DirecTV satellite dish. It’s hard to avoid Talking Heads comparisons in the art-pop world, but when you’re adding brazenly so-uncool-they’re-cool dance moves and absurdly outsized clothing items into the mix, it’s clear that Stop Making Sense has exerted an enormous influence on the band.

Traver herself has identified the Heads as a sort of centerpiece for her and co-bandleader Alex Toth’s creative palette. “We loved things that seemed modern, angular, avant-garde, absurd, free, upside down, and backwards,” Traver told one interviewer. “When we began touring with Rubblebucket, our bandmates showed us Talking Heads, and things started making a lot more sense (no pun intended).” The band even reportedly has it in the works to make their own art-piece of a concert film inspired by—you guessed it—Stop Making Sense.

Sonically, Rubblebucket exhibits more diverse influences, all on display on Saturday night at U Street Music Hall, with the horns in particular allowing the band to explore some interesting spaces. “Forlornification” featured a distinctly Cake-flavored trumpet-and-vocal back-and-forth. “On The Ground” delivered more soaring horn lines, evoking a triumphant parade like a dancey Beirut. And on several songs throughout the set, Traver’s bari sax filled out the low end with a woody rawness that played well off of the more pristine bass and synth tones.

After overcoming some potentially catastrophic life events, from the rocky end to Traver and Toth’s long romantic relationship to each of their battles with debilitating diseases (Traver with ovarian cancer and Toth with alcoholism), Rubblebucket reformed with a powerfully optimistic sound. The upbeat tunes on Sun Machine call to mind a battered boxer raising his gloves in victory at the end of a hard-fought match. Despite eight of twelve songs on Saturday coming off the new record, every bouncing face in sight sported an ear-to-ear grin from start-to-finish. The band looks to have emerged from dire circumstances with new life and making some of their best music yet.

Click here to see the setlist for Rubblebucket's performance at U Street Music Hall on October 27, 2018

*Instrumental tune performed acoustic and led by trumpets parading through the audience and settling at the merch table.