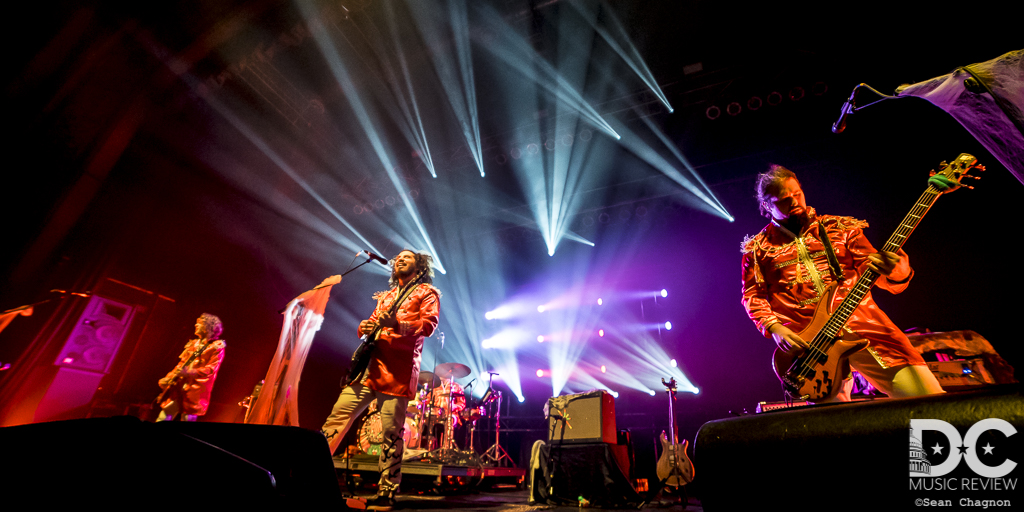 To most, Halloween is synonymous with spikes in blood sugar and costumes that people don to impress, get a laugh, or even give someone a bit of a scare. Not all costumes are tangible, though. Halloween provides bands an opportunity to put on an audible costume and pay homage to musical legends for a night. This year for Halloween, Pigeons Playing Ping Pong skipped the trick and gave its fans, the Flock, a big treat – a total of four Red Hot Sgt. Peppers themed nights starting with a sold out show at The National in Richmond, Virginia and two more stops in Charlotte, NC, and Atlanta, GA. The night began with The Kitchen Dwellers priming the crowd with their brand of bluegrass. The Dwellers came out in costumes that looked quite familiar to any PPPP fan; they were dressed as the Pigeons themselves! Their eight song set began with originals and they soon started to pepper in their musical costume which included Duran Duran, Black Sabbath’s “Paranoid” and The Doors’ “People Are Strange.” They finished with the title track of their newest release, Ghost In The Bottle, with an instrumental jam of M.I.A.’s “Paper Planes” sandwiched in the middle. After a short break, the lights finally dimmed.  The sold out crowd cheered a deafening roar as the Pigeons marched out on stage in a single file line wearing their matching Red Hot Sgt. Peppers outfits. The shirts and pants were replicas of the clothing the Beatles wore on the cover of Sgt. Pepper’s Lonely Hearts Club Band, with a modified Red Hot Chili Peppers logo sporting their name on the back of the shirts. The band was all smiles with the overwhelming response they received from the Flock. The musical proceedings did not begin with the band playing, though.  Not only was it Halloween, but it was also front man Greg Ormont’s birthday. The crowd sung him “Happy Birthday,” led by bassist Ben Carrey. Greg thanked the crowd and the band began what would be a phenomenal night of music. The set started with two Pigeon originals, “Poseidon” and the instrumental “Offshoot.” The band finally put on their Halloween plumage with Ben tearing into the bass intro of RHCP’s “Around the World.” The rest of the set was musical ping pong with the band bouncing between their own material, RHCP, and The Beatles. The energy the guys brought to the stage was contagious.  Lead guitarist Jeremy Schon’s screaming solos, and Greg’s pigeon dance just pumped the crowd into a more frenzied state. They tore through 13 songs, only stopping once for a short breather, that were all jammed into each other weaving their musical costume in which included The Beatles “Birthday,” “Sgt. Pepper’s,” and “Eleanor Rigby,” RHCP’s “Can’t Stop” and finally brought set one to a close with “Twist and Shout” buried in the middle of the melodic “Julia.” The Red Hot Sgt. Peppers night was turned up to 11 for the second set. It started with an incredible mashup of songs: “Walk Outside” morphed into The Beatles “Dear Prudence” and then back for a short time which went straight into RHCP’s “Otherside” and back into “Walk Outside.” Mashup number two of the set took things even further. When they started with “Somethin’ For Ya”, they weren’t lying. That led into a massive seven song run of Beatles/RHCP which included a super funky “The End” and “Walkabout.” The set was wrapped up with the crowd helping sing “I am the Walrus” which was jammed into a fitting “Horizon” finale. You could truly feel the energy and love in the room as the crowd joined in on singing the “Celebrate the people you love” refrain. The encore consisted of an unfinished “Zydeko” which was jammed into “Hey Jude.” As the house lights were brought up, and the band was exiting the stage, the crowd continued the outro “Na na na naaaaa, Hey Judeeeee” chant until the band were no longer visible.

The Pigeons always put everything they have into their performances, but this was really one for the record books. Every Flocker in the room could agree that they were treated to a once in a lifetime experience and an unforgettable night. Click here to see the setlist for Pigeons Playing Ping Pong's performance at The National on October 31, 2018

12. Give It Away (Red Hot Chili Peppers cover)

Setlist below. Plenty more surprises in store for the next three nights in Charlotte and Atlanta...