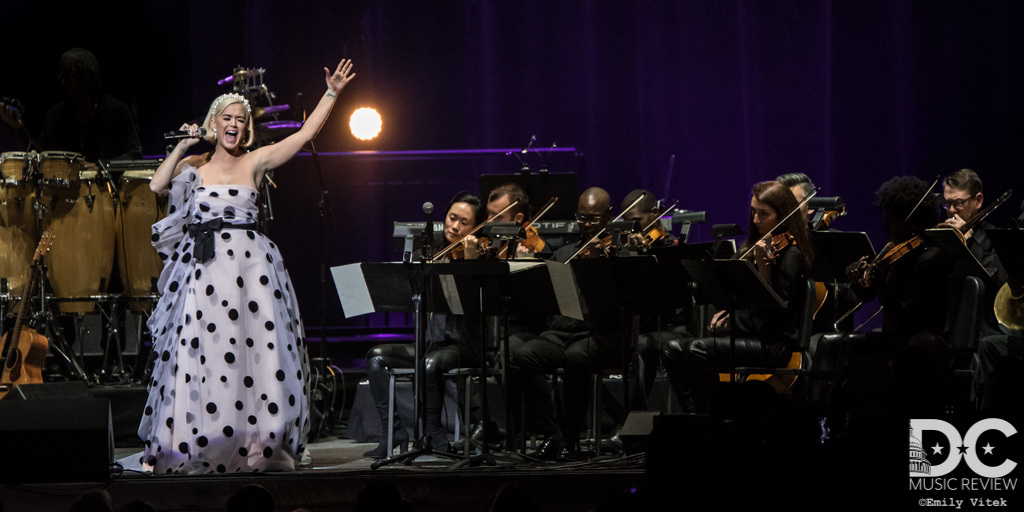 DC locals were treated to a unique experience Friday evening at The Anthem where they witnessed performances by top acts such as Katy Perry and Norah Jones, all while supporting a good cause. Presented by the David Lynch Foundation, the Silence the Violence benefit concert taught audience members about Transcendental Meditation.

Throughout the event, video clips were shown to demonstrate the positive effects TM has had on hundreds of at-risk students at in the greater DC area, and how TM could be used to improve behavior and in turn reduce the rate of violence. Proceeds from the event will be used to bring the Transcendental Meditation technique to vulnerable communities in the District through in-school and after school programs, churches and community centers, recovery programs, and detention centers in partnership with THEARC (Town Hall Education Arts Recreation Campus). Previous research has claimed that TM reduces stress, heals PTSD, lowers substance abuse, improves academic performance and graduation rates, and reduces arrests for violent crime. First up to the stage was Norah Jones, who gracefully played at her piano and filled the room with a calming presence. She started her performance with her original song “Just a Little Bit” off her seventh studio album Begin Again. Jones dedicated the rest of her set to cover songs, including Neil Young’s “Don’t Be Denied” and Jesse Harris & The Ferdinandos’ “I’ve Got to See You Again” and “Don’t Know Why”.

Next up was gospel singer Mavis Staples, also known from her family band The Staple Singers. Staples accompanied The celebration gospel choir to sing her hit “Change”, in addition to following the cover trend with William MacEwan's “Will the Circle Be Unbroken?” and The Band's "The Weight". She ended her performance with a girthy performance of the Staple Singers’ classic “I’ll Take You There”.

"Mental health is the number one challenge we're facing in our lifetime. I've had depression in the past, and I've used my music and meditation to combat it. Once you learn it, it never goes away. You'll have it for the rest of your life. Whenever I'm in a funky mood or if I'm jetlagged or if I'm anxious - I'll say just give me 20 minutes, and I will go deep and come back out a transformed person. I'm here tonight because I hope that we can give this tool [of meditation] to so many young people that are suffering." - Katy Perry Ending the evening’s performances was pop icon Katy Perry. The American Idol judge opted for instrumental versions of some of her top hits, including “Chained to the Rhythm”, “Roar”, “Wide Awake” and “Rise”. After pausing the performance to encourage audience members to pull out their phones and donate to the good cause, she ended the night by going back to her gospel roots with a mashup of “Oh Happy Day” and “Firework”.

About the David Lynch Foundation

The David Lynch Foundation helps to prevent and eradicate the all-pervasive epidemic of trauma and toxic stress among at-risk populations through promoting widespread implementation of the evidence-based Transcendental Meditation (TM) program in order to improve their health, cognitive capabilities and performance in life.

The Town Hall Education Arts Recreation Campus (THEARC) is located  D.C.’s Wards 7 and 8. Managed by Building Bridges Across the River, a D.C.-based nonprofit 501(c)(3) organization, it is the largest social service, multi-sector, nonprofit collaboration in America. The David Lynch Foundation is a resident partner on THEARC’s West Campus and operates

The Meditation Center (TMC) at THEARC opened its doors in January 2018 to address the epidemic of stress and trauma which undermines the health and well-being of residents in Wards 7 and 8. TMC serves youth, adults, and seniors by offering Transcendental Meditation (TM) courses. In addition, TMC partners with the 13 other community service organizations at THEARC to train their staff and clients in the Transcendental Meditation technique.