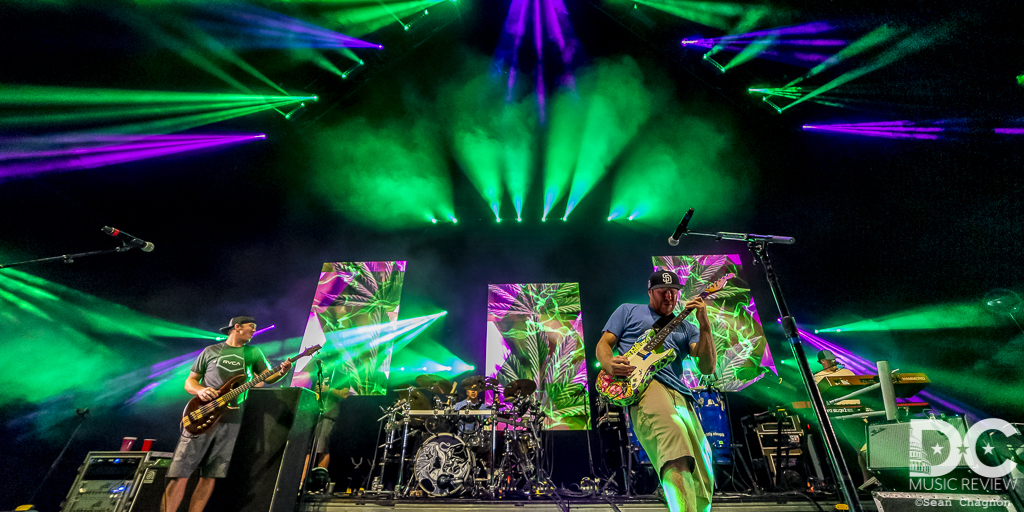 With summer in full swing, everyone wants to feel the sand between their toes and be able to jump in a cool body of water to get some relief from the sun. One surefire way to complete that beach vibe is to have a cold drink in hand and some good reggae tunes bumping on the speakers. Slightly Stoopid and company are doing their part to help the masses by going on their How I Spent My Summer Vacation Tour. With no shortage of talent on the tour, it made for a fun night with surprise appearances and members of all bands sharing the stage with each other. The first sounds of summer came straight from Hawaii itself with Hirie taking the stage. Her small stature is no indication of her powerful voice and with a band that packs a punch and some solid dance moves, the show was off to a great start. The band even stepped aside briefly to allow a mid set proposal by an audience member. Taking the stage next was Grammy nominee Matisyahu. His breakout single “King Without a Crown” was one of the many familiar tunes that were played. It wouldn’t be a Matisyahu set without hearing his impressive beatboxing. With a history that includes sharing the stage at Bonnaroo with Phish’s front man Trey Anastasio, he delivered an excellent performance without question. SoCal reggae rockers, Tribal Seeds, took the reins next and delivered a solid performance. Since the release of their debut album in 2008, they have racked up quite a few awards including artist of the year at the San Diego music awards and hitting number one on the Billboard reggae charts. Slightly Stoopid took the stage with an amped crowd cheering them on. Kyle McDonald and Miles Doughty led the band through their dub and reggae anthems such as “Closer to the Sun,” “This Joint,” and “Officer” while swapping places multiple times throughout the night on bass and guitar. They shared the stage with openers Hirie and Matisyahu and were also joined by Chali 2na of Jurassic 5 on a couple tunes. Lighting designer Scott O’Connor rounded out the performance by providing spectacular visuals throughout the set.

Slightly Stoopid has plenty more summer dates lined up throughout the States and Europe. Get out and add this fun band to your summer soundtrack!