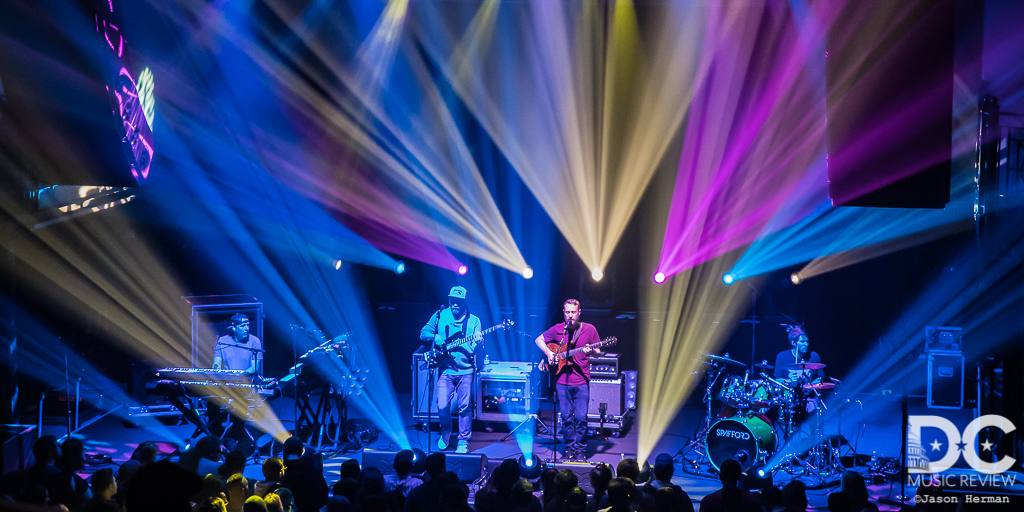 Spafford made their return to DC this weekend, packing in the 9:30 Club for their first headlining gig at the venue. In just their second performance in the District, the Arizona-based jam quartet delivered two sets of "electrofunk therapy," their particular blend of prog-rock, funk, metal, and dance grooves with a heavy dose of extended improvisation. The DC-based band, Of Tomorrow, kicked off the festivities, getting the crowd warmed up with an excellent set of  funk, soul, and a hint of psychedelia. Of Tomorrow had the audience dancing throughout their opening set, and performed to a nearly full room. Following a pair of recent gigs supporting Big Something, this local DC act is gaining some steam and helped set the tone for a great night of high energy party music. Opening the first set with "Double Time," Spafford's singer and guitarist, Brian Moss, sang "Deep breath, cut the lights, and then we start the show," as the band dove into a song that shifts between slow funk and dark, heavy instrumental breaks that showcased Moss's ability to shred like a heavy metal guitarist, while bassist Jordan Fairless and keyboardist Andrew "Red" Johnson provided thumping bass lines and textured layers with piano and organ. "Lovesick Melody > Soil" provided the first jam of the night, beginning in a rhythmic, funky space before drummer Cameron Laforest offered a series of upbeat, syncopated drum fills that inspired Moss to lead the jam with a patient guitar solo that reached a series of peaks, each more fast-paced and intense than the previous one. Following the raucous jam from "Soil," the band slowed things down with a cover of Alex Clare's synth-pop, dubstep hit, "Too Close." Spafford's covers are an area where the band truly shines, bringing their own arrangements to other artist's songs that not only pay tribute to the original renditions, but make them unique additions to their own live catalog. In the case of "Too Close," the top-40 hit is transformed into an introspective jazz ballad, led by Red Johnson's delicate intro on the Fender Rhodes and powerful lead vocals.

The first set closed with its unquestionable highlight: the debut of "Dirt Bath," a wide-ranging and intricately composed instrumental tune. This new song brought the audience on a 23-minute journey through sections of major-key bliss and an ever-growing energy that twisted and turned with soaring guitar leads, harmonic plateaus, dirty funk dance breaks, and full-band peaks. Just two weeks into their winter tour, "Dirt Bath" is Spafford's third new song debuted in 2019, and it will be exciting to see how this prog-rock epic gets worked into the rotation of their set lists moving forward.

While "Dirt Bath" will deservedly be the most talked about moment of the show, Spafford's second set provided highlights until the very end. The band came back with high energy jam vehicles in "Lonely," "Bee Jam," and "Weasel" to keep the party going late into the night. Showcasing another rearranged cover, the band performed Green Day's "Longview." Spafford's rendition of the pop-punk classic offered some great nostalgia while providing both a rocking sing-along and a mellow, major key jam. After taking a breather with "Home (One Place I'll Never Be)," the set would close with "Salamander Song," to leave the crowd "dancing the whole way home," as its lyrics suggest.

Taking the stage for their encore, Spafford had much more left in the tank, delivering outstanding performances of "It's a Bunch" and "Minds Unchained" to round out the night. After packing the venue and delivering a stand-out Saturday night party, it's clear this won't be the last time Spafford plays the 9:30 Club, as the red-hot jam band continues to cultivate a following throughout the DC area.

Click here to see the setlist for Spafford's performance at the 9:30 Club on February 9 2019

It's A Bunch > Mind's Unchained

Official print for tonight’s show at @930club in DC. ​Click here or image to purchase the Nugs.netSoundboard Recording