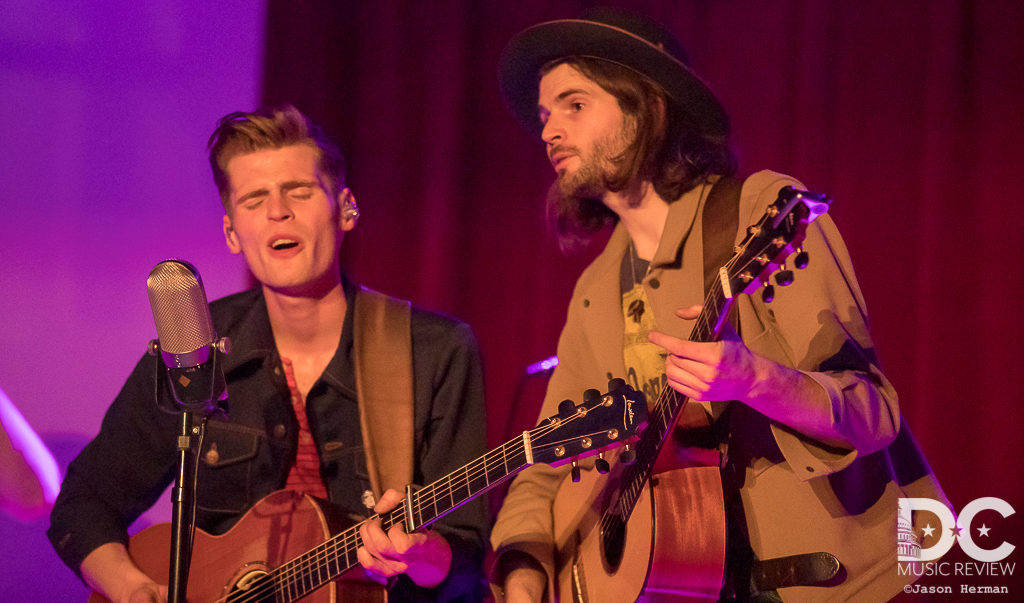 On Monday February 4, 2019 Irish folk-rock duo Hudson Taylor returned to Washington, D.C. for a fourth time, this time as headliners at City Winery D.C. This will be the second time they’ve struck a chord with DC Music Review, the first time back in September 2018 when they opened for Hozier. The two brothers - animated Alife and reserved Harry Hudson-Taylor, with two bandmates, put on an intimate performance that was perfectly tailored to the venue - at one point playing two songs out on the floor by the tables in the back of the room. Not to mention, the acoustics on the third floor enhanced the brothers’ complimentary voices that created ethereal harmonies and melodies. Their voices are absolutely beautiful.

Starting off their set with, “Travellin’,” from their 2018 EP Feel It Again, they changed a lyric from, “Here I am, I’m in Amsterdam,” to, “Here I am, I’m in Washington, D.C.,” prompting cheers from the audience. Alfie is a pleasure to watch as he puts his whole body into every song. After playing, “Run with Me,” which is lyrically phonomenal (like every other one of their songs), Alfie remarked that the audience had good rhythm, “I’ll have to remember that for next time!” A few members of the crowd had gotten up to dance, while everyone else was clapping along. A highlight of the performance, was when the band walked off stage to the back the room, standing level with the audience - everyone had stood up at this point, and played “Pray for the Day,” and “You Don’t Want to Know,” both of which exemplified their perfectly paired vocals.

Hudson Taylor completes the North American portion of their tour this week. On each  trip to America, Hudson Taylor wins over a large group of fervent and dedicated fans. If this evening's performance was any indication of their success and growing fanbase,  we can be rest assured they will be back again soon to win over more fans. Click here to see the setlist for Hudson Taylor's performance at City Winery DC on Feburary 4, 2019

7. I Love You and You Don’t Even Know