TESTIFY! DC Supergroup Honors Rage Against the Machine for Benefit Concert at The Pie Shop 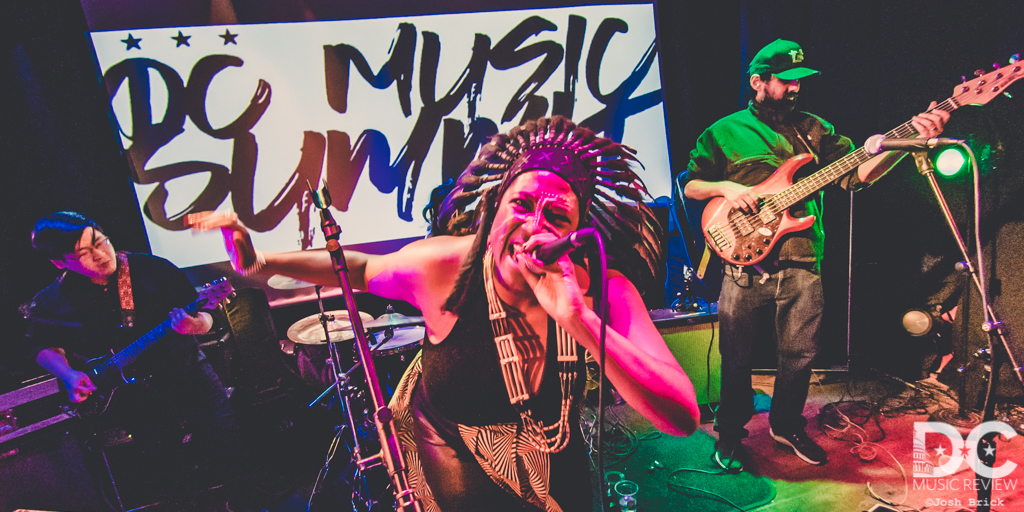 Some of DC's most notable musicians joined forces to Testify! on Saturday, February 9, at Dangerously Delicious Pies (aka The Pie Shop) on H Street to help raise money for the DC Music Summit. The group included Dior Ashley Brown (vocals), Isabelle De Leon (drums), Neel Singh (bass), Erik Estrada (bass) and Chris Lee (guitar), who joined together for a fantastic tribute set to Rage Against The Machine to the delight of a packed crowd. Local acts Mary-el Band and Bad Krohma each played a set to open the show. Mary-el Band is fronted by Mary Lankford (guitar, vocals) and plays a delightful blend of rock, R&B, soul and funk music. The band consists of David Ray (drums), Gordon Sterling (guitar) and Singh (bass), who pulled double-duty for the evening. Saxophonist Elijah Jamal Balbed joined the band for a couple of tunes that included some extended jams. The band was tight and had the crowd grooving before Bad Krohma brought a set of hard rock to the stage. The trio turned the volume up and played several originals before going into a 90's rock medley that included songs by Alice In Chains, Nirvana and Soundgarden. They set the stage for the main course, Testify!, and they did not disappoint.

The headlining supergroup came out swinging with Rage's "Killing In The Name," an era-defining hard rocker that speaks against the ails of society including institutional racism and police brutality. Brown was impressive with her biting vocals and incredible rapping, doing her best  Zack de la Rocha impression. Next came "Bulls On Parade,"  perhaps one of Rage Against the Machine's most popular hits, and the band was in full throttle early. The high-energy rock continued with "Guerrilla Radio" that featured De Leon's exceptional and powerful drumming, supplemented by Lee's impressive guitar work, emulating Tom Morellos' wild solos and unique use of the wah pedal. Singh shared bass responsibilities with Estrada for a few tunes before returning for the apropos set closer, "Testify."

The evening was successful as Brown helped educate the crowd about DC Music Summit, who's goal is to help local musicians gain important knowledge regarding how to market themselves and improve their brand. Check out their website to learn more and get involved.

The Summit was founded by three black women who love music, who care about the DC community, and who saw an opportunity to highlight the link between creativity and entrepreneurship. The goal of the Summit is to support musicians in building their creative business and create sustainability through their craft.

The Summit focuses on the DC Musician's business, community, and the art,  the sessions are intensive, building greater understandings, deeper connections, and bursting opportunities.  The DC Music Summit puts itself in the heart of the underserved communities/business, making it accessible, focusing on creative minorities, underserved business, and underground independent artists. "