Full Steam Ahead for The Bad Plus at DC Jazz Fest 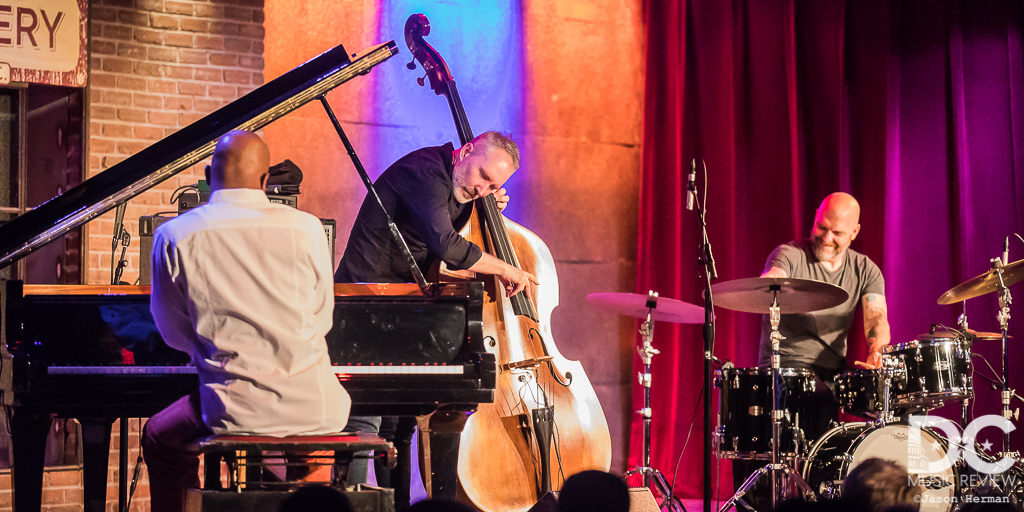 A new band is turning heads on the jazz scene this year. A mere five months into touring, the group is pulling off an inventive and wildly ambitious approach to the acoustic piano trio. Artfully navigating complex-meter grooves and transforming solo sections into miniature full-band improvisational journeys, the three musicians are an astounding display of virtuosity and jazz bona fides. But in what is perhaps more impressive, the group consistently manages to build these technical features into a cross-genre pollination that gives audiences something to latch on to. A simple melody or driving drumbeat grounds us in something relatable and inviting, and the technical sophistication is there as a tool to pull us further into a beautiful musical idea. The balance is masterful. While the description likely seems familiar to fans of The Bad Plus, the band is in fact a new one by the same name. The trio of seventeen years parted ways with pianist Ethan Iverson last year, shocking devoted fans, and immediately picked up a new man behind the ivory, Orrin Evans. Iverson was not just one-third of the band’s sound; he was a distinctive creative voice whose quirky choices and obscure musical sensibilities—his fanaticism for avant-garde contemporary classical composer György Ligeti, for example—provided crucial ingredients for the band’s undeniable and often-celebrated originality. It’s no surprise then that some fans and critics winced at the notion of The Bad Plus continuing on with a “replacement” pianist. In reality, no one could “replace” anyone in a band like The Bad Plus. A piece is lost, a piece is added, and even if it has the same name, a brand-new thing stands afterward. On Sunday, June 10th, as a part of DC Jazz Fest, that new thing—the project of Reid Anderson (bass), David King (drums), and Orrin Evans (piano)—gave music fans plenty of reasons to be excited. Blending with King’s frenetic energy and Anderson’s precise backbone, Evans brought lush chord voicings, focused melodic development, and a smoothly flowing right hand. The nerves that had swirled around the January studio release Never Stop II, recorded after the band had barely a few rehearsals under its belt, appeared nowhere to be found right from the get-go in the solo section of  the opening tune "Big Eater," as Evans boldly offered his take on the Bad Plus classic and teased out a dissonant theme in the second chorus. "Hurricane Birds" again saw Evans taking an aggressive tack, building the tension far beyond the studio version and culminating in several powerful stabs at the upper register. With boldness also came ingenuity:  Toward the end of the set-closing “Seams,” Evans opted to build by rapidly hammering at just a single note for several bars, seeming to cue the band to blossom around it and fill up the space. And while the aggression and creativity serve as familiar elements from the band's original lineup, Evans also offers stylistic features that remind us this band is different. Hints of Keith Jarrett, for example, flowed naturally from Evans' chord movement at several parts in the set and felt like fresh territory for the group, particularly in certain sections of "Safe Passage" and "Lean in the Archway."

Though all eyes were on Evans as the new guy in town, Anderson and King contributed stellar performances as usual. Often Anderson is the glue holding things together, staying relatively true to the composed form, but on occasion he grabs a few notes that demonstrate how hard he’s listening to his bandmates.  In one notable moment on the bluesy “Keep the Bugs of Your Glass and the Bears Off Your Ass,” Anderson temporarily abandoned his post in the low end and ventured up the neck, dancing in triplets to match King’s hi-hat before quickly hopping back into his structural role. King, meanwhile, is an ebullient fountain of constantly evolving ideas and rhythmic variations. Shifting accents in the barely audible snare hits in “Hurricane Birds,” for instance, made the groove an unavoidable magnet for the audience’s attention. At other times King’s exploration is much more out front, a result of attentive listening and reacting to Evans or, as in “Seams,” running through free-meter abstraction that seems to put each drum on the kit into conversation with the rest. To top off the night, King took a romp through Aphex Twin’s “Flim,” expertly mimicking the electronica artist’s signature fluid and stuttering rhythmic style. The tune displays King’s unique sensibilities behind the kit so astoundingly, it’s no wonder the band has chosen to keep it on for the new era.

Never Stopping and Always Looking Ahead

The new Bad Plus looks to be overwhelmingly forward-looking. Only four of the eleven songs came from pre-2018, and the cuts off the new record consistently displayed a more potent energy and wider dynamic range than on the album. A rejuvenated and inspired Bad Plus is on the road again, and if Sunday night’s performance is any indication, the trio will continue to grow beyond the baggage of the Iverson era and into something brilliant in its own right.

Click here to see the setlist for The Bad Plus' performance at City Winery DC on June 10, 2018

The Bad Plus is touring in support of their latest album, Never Stop II released January 2018.