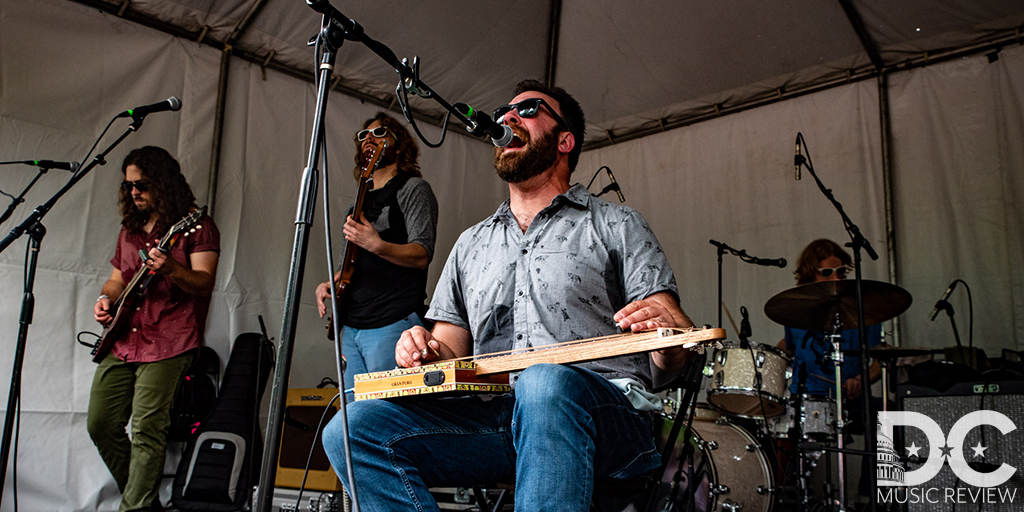 Karin McLaughlin: Ok so hanging out with Cris Jacobs after his set at the Kingman Island Bluegrass Festival

KM: That was pretty intense with the rain, that was really a good one!

CJ: Yeah that was really cool, it was like a 30 second downpour

KM: Heavy, heavy. So you also recently played Delfest, now Kingman Island, where do you go after this?

CJ: Well, we’re going home tonight. And then next week, we’ve got some cool shows. We’ve got a concert series in Abingdon, VA and Charlotte, NC and then we’re going out west and doing High Sierra and then we’ve got a bunch of shows around that.  We’ll be doing Hot August in Baltimore at the end of the summer.  Got a couple Bridge shows next week – the 8x10.

KM: Any idea why they call it Charm City?

CJ: Because it’s charming (laughs) you know what, I don’t know the origin of that. CJ: No, Baltimore gets a bad rap

KM: What’s your favorite venue to play in Baltimore?

KM: That’s a good one

CJ: I have probably played that venue more than anybody on the planet. Honestly, throughout the years and all the different venues.

CJ: They have the AC cranking in there these days. In the old days, you know you could smoke in there.

KM: You also mentioned the Dead – did you say that you saw them here in ’94?

KM: So this was not with parents?

CJ: Actually, this was with parents because my parents were huge Deadheads and my parents have been going to see the Dead since 1968. CJ: Everywhere but yeah that was my first show and they, you know, my parents have been leaving me and my sister with a sitter for long weekends all throughout our childhood for three nights at Madison Square Garden (laughs)

KM: Yup, I have friends that are doing that (now)

CJ: So finally, it was ‘hey can you guys get me a ticket this time around?’

KM: And then it was all clicking ‘Oh, that’s what they’ve been doing all this time!’

KM: How much would you say the Dead influences your music?

CJ: Oh it influenced my whole….

​​CJ: Yeah, it influenced my whole jumping off point into a different world and that’s when I really got inspired to play the guitar.  To perform and write music for people – it was that show, here at RFK, it was my first ‘a-ha moment’ like ‘I wanna do THAT’ so I guess you could say that it’s influenced me quite a bit.

KM: So, what was that – a cigar box with strings attached to it?

KM: Did you build that?

CJ: No, I know a guy out in Oregon that makes them and he’s built me a couple.  Yeah, it’s a cigar box guitar, it’s pretty wicked.

KM: That’s awesome – like the old school washboard and jug. KM: So, you’re playing Hot August (Music Festival), what else are you excited about in 2018?  Maybe not even playing a show, maybe going to one.  Are you teaming up with anyone you’re really excited about?

CJ: Well, we just opened for Willie Nelson and Sturgill Simpson at The Anthem.

KM: What is that tour called?

CJ: Well, they’re doing the Outlaw Music Festival but we did just a show at The Anthem with just them.

CJ: Yeah he is

CJ: And Willie. But yeah we’re excited.  Finishing up our album, got a new album in the works and putting out an album in September that I worked with Ivan Neville on

KM: Oh, nice, I caught him, I think at Jazz Fest recently.

CJ: Yeah, you probably did!  He’s all over the place.  When were you down there?

KM: I was down the first weekend of Jazz Fest.

CJ: Oh, I just missed you – I was down there Monday of the week between.

KM: Monday is something else in New Orleans, Bourbon St is a sad, sad sight (laughs)

CJ: Yeah, I don’t even go to Bourbon Street anymore

CJ: Hmm, good question.  There’s a lot of people I’d like to write songs with.  I’d love to write a song with Chris Stapleton or Jason Isbell but I’d love to play with some members of The Grateful Dead one day before it’s all over.  I haven’t gotten to experience that one yet, but I feel like it could happen soon.

KM: Yeah, why not?!  Well thank you so much for the time.  We’ll see you at Hot August or somewhere in between.

Enjoy audio and livestream recordings of their Kingman Island Bluegrass & Folk Festival performance recorded by our collaborator Will Urquhart.

Cris Jacobs and his band, The Bridge, are doing three nights in a row at the 8x10 on June 21, 22, and 23. Tickets are still available but running very low, so make sure to buy them now if you want to go!