The Bad Plus Comes to Blues Alley In Washington DC 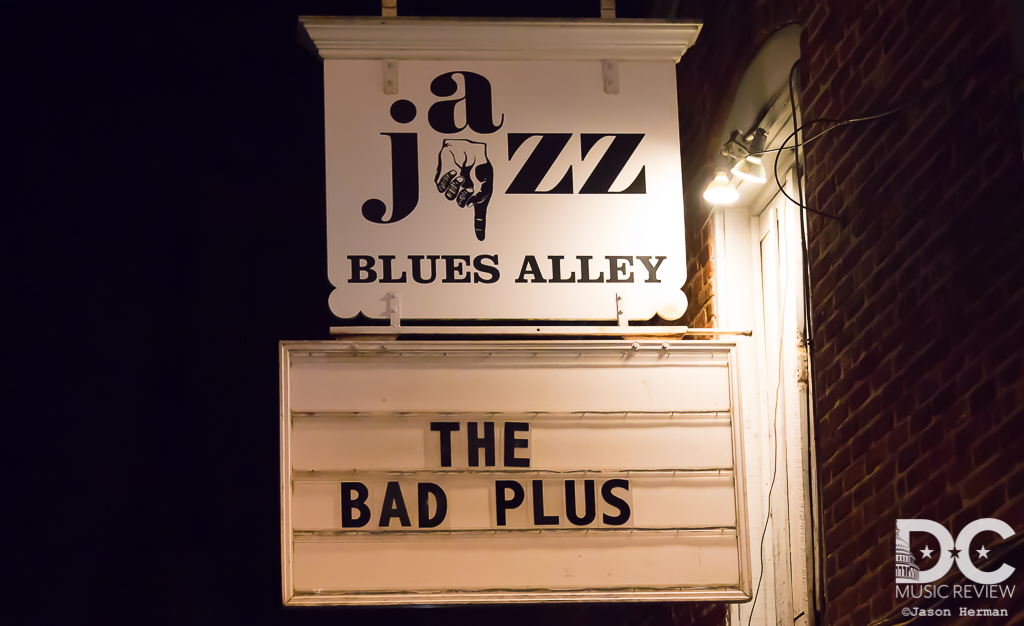 The Bad Plus kicked off their 2018 Spring Tour in Washington DC with a three-day, six-performance appearance at Blues Alley in Georgetown on March 9, 2018. The audience contained a diverse mix of band and jazz enthusiasts from the surrounding area. The Bad Plus, an Avant-guard jazz trio formed in 2000, and only recently announced a lineup change with the original pianist, Ethan Iverson, parting ways with the band towards the end of 2017. In January of 2018, Orrin Evans joined the group. With a new formation and a new album, Never Stop II,under their belt, the band was eager to hit the road and show how their sound has changed. At the same time, it’s also stayed the same, but still a notable and energetic departure from conventional jazz.

Before the show, Orrin Evans (piano) sauntered unnoticed and freely surveying those in attendance. Evans, when recognized, was gracious and happily engaged with fans.

The trio appeared on stage at 8:00 p.m., and it was immediately apparent why this band has earned the following that they have. Reid Anderson (bass), Dave King (drums), and Orrin Evans energetically and seamlessly intertwined their instruments with one another. Throughout the evening one thing was sure: the band was enjoying themselves — you could not help but notice King beaming with an ear-to-ear smile. Anderson's bass provided a luscious and rich sound that often appeared at the beginning of a song and then sustained the backbone of each song. Lending to their Avant-guard reputation, Anderson provided rare bass mastery as he played the fingerboard on the belly of the bass close to the violin corners of his instrument. At times, King would delicately add precise texture to a song with the exacting touch, the butt of his drumstick achieving a perfect accent or crescendo to a piece. All the while Evans would flawlessly interact with the bass and drum before flying away effortlessly like a bird taking flight into the heavens. Despite having the reputation as an Avant-guard jazz band, The Bad Plus's music is exceptionally accessible. Each audience member in attendance seemed genuinely engaged, connected, and enjoying the music. In the shadows of the room, you observed servers smiling and dancing to the music. In the end, you could easily see smiles and sincere appreciation for the performance throughout the venue.

Throughout the evening Anderson would indicate the songs the band had just played and who composed the song. At one point Anderson told the audience members where their album and merchandise could be purchased to which he joked "Miles Davis would have been like 'you guys are so on top of it!'" to which the audience laughed out loud. In years and performances past The Bad Plus has included jazz interpretations of Nirvana, Pink Floyd, Neil Young, Queen, and Black Sabbath to name a few. This evening’s performance revolved around the songs contained on Never Stop II, perhaps because the band was making a statement, perhaps because their tour is in support of this album, or possibly because of the reputation of Blues Alley. This is not to say that this incredible band will not surprise us with a cover of a rock song in their upcoming performance — you will just have to come to a show and see for yourself.

The Bad Plus continues to tour the United States through the end of March before embarking on an April European Tour. After their European Tour be sure to see The Bad Plus when they commence another U.S. tour.

For the band's full tour please refer to their web page.

The Bad Plus - Never Stop II (Click on album to open their online store.)

Learn more about The Bad Plus and their new album Never Stop II.

Video Courtesy of The Bad Plus.  Please make sure to check out their YouTube Channel.