The Disco Biscuits Deliver Improv, “Untz” to the Anthem 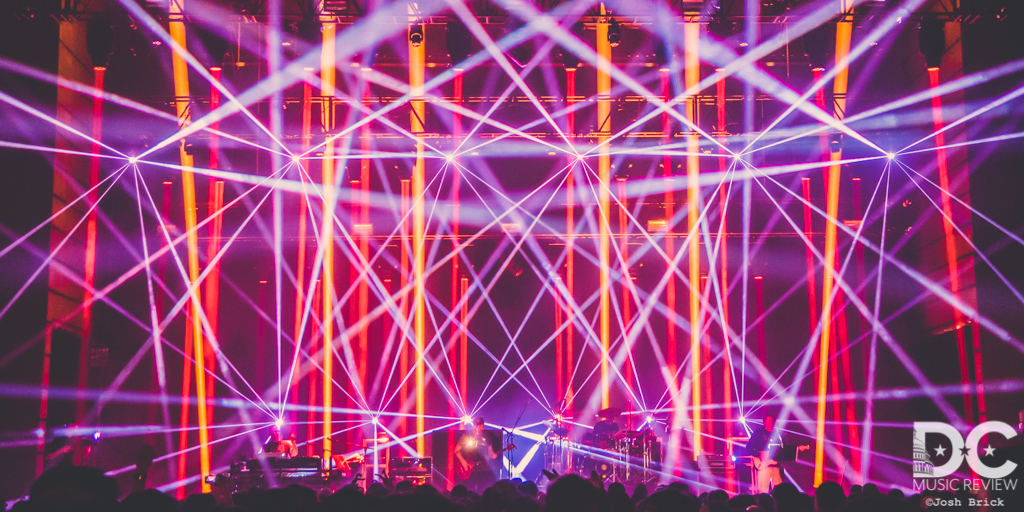 Kicking off their winter tour in DC, The Disco Biscuits played a pair of shows at IMP venues last weekend, delivering two spectacular nights of EDM-infused jams and deep musical exploration. After an evening in the intimate confines of the Lincoln Theatre on Friday, the band's Saturday night rager at The Anthem lived up to the scale of the room in which it was performed. Known for their extended improvisation and danceable grooves, the four-piece outfit put on an epic party at the Southwest Waterfront. With no opener on the bill, fans piled into the Anthem well after the ticketed showtime. If you haven't attended a Disco Biscuits concert before, being among their fan-base is a unique experience unto itself. As the crowd filed into the lobby, I overheard one attendee, clearly one of the uninitiated prior to that evening, say to their friends, "Wow. There's a lot of glitter and animal costumes here, huh?" The crowd resembles the meeting point of a rave and a drum circle, with dreaded hippies and neon-clad dancers converging on the scene to enjoy the dazzling light show and the "untz" that defines the band's sound.

The band wasted no time, taking their opening tune, "On Time," for an extended jam that flowed seamlessly into "Tricycle," before making another transition into "Aceetobee." This tune became the focal point of the set, featuring a 30+ minute jam segment that spotlighted guitarist Jon "The Barber" Gutwillig and keyboardist Aron Magner exchanging leads and locking into intense grooves with the other two members of the band. Following an unfinished version of "Loose Change," the band concluded the set-opening "On Time" and the set. Two of the distinguishing features of the Disco Biscuits live experience are "inverted" songs, where the band will rearrange the order of composed sections of their songs that surround the jam, and "sandwiches," where the band will segue from one song to another during a jam and eventually return to finish the previous song. The second set prominently featured both. Following an extended set break, the band returned to the stage, literally wearing their love for DC, with Barber sporting a 9:30 Club t-shirt and drummer Allen Aucoin wore a Capitals t-shirt. The band launched into "Magellan," which provided a great soundtrack for the crowd to get back into the swing of things, gradually ramping up the energy into an intense and outstanding jam. The rest of the set included two sandwiches, the first coming out of "Jigsaw Earth" with a length rendition of "Munchkin Invasion" and an extended drum solo. The rest of the set was made up of a "Story of the World" sandwich, with the first ever inverted version of "Therapy" providing the meat.

All told, it was another outstanding two-night run in the annals of history for the nearly 25-year-old jam band. Following a similar two-nighter in 2018, we can only hope that the Biscuits will make this an annual tradition!