The Feminist Pop Punk We Sorely Need: Tacocat at DC9 (with GYMSHORTS) 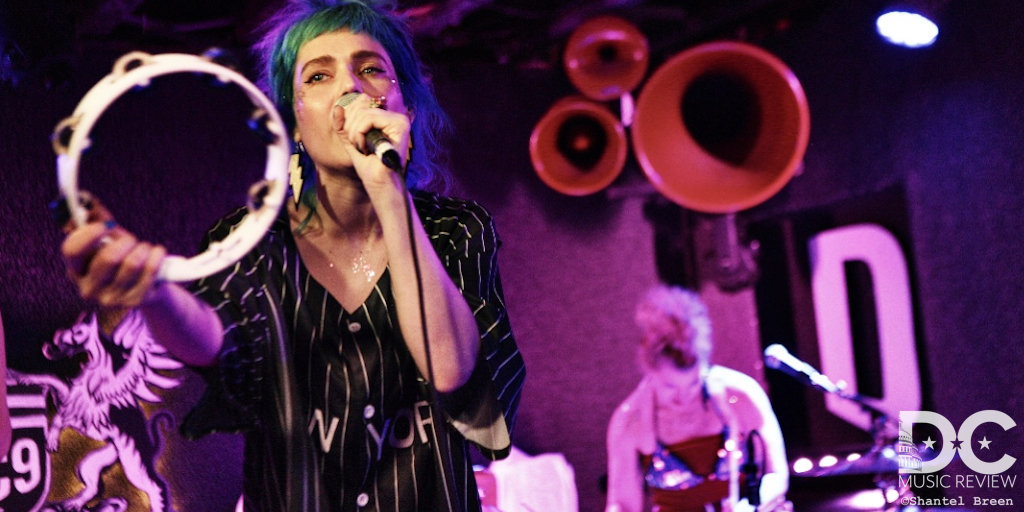 Between the grizzly pounding of picks on fuzz-laden guitars, GYMSHORTS’ Sarah Greenwell shouted into the mic like a crazed fan who had climbed on stage to profess her love for the headliner: “Tacocat!”—smash smash smash—“Tacocat!”—smash smash smash.  While the original lyric bemoans an imitator (“Copycat!”), Greenwell’s lyrical nod to their tour-mates ironically put the shoe on the other foot and demonstrated what has now become a nationwide phenomenon:  A female-led punk movement is brewing, and the feminist surf-punk quartet from Seattle is in the driver’s seat. Right from the start GYMSHORTS made clear that they’d provide the edgier yin to Tacocat’s more pop-leaning yang. Songs like “Breathing On Me” and “Bedstuy” jumped back and forth between traditional Dead Kennedys-style aggression and the dark, down-tempo march of Melvins-influenced sludge. Thick guitar sounds crunched along with the beat, and Greenwell occasionally slid into a convincing Kim Gordon impression, borrowing the Sonic Youth singer’s signature unaffected, irreverent delivery. And while hardcore to the bone, GYMSHORTS also didn’t shy away from dialing back the rawness for a couple short, head-bobbing rockers that put Greenwell’s best songwriting on display. With “You Blew It,” the most recent single off of the forthcoming album Knock, Knock!, the band squeezed every last drop out of 90 seconds of an energetic and impressive tune that smacks of The Hives’ first album.

Not surprisingly for the young band out of Providence, it was the newest and currently unreleased songs played Friday night that showed the most maturity and promise. If those are any indication, that new album out August 28 is going to be one to watch. On the heels of the aggressive opening set, Tacocat’s fun blend of sixties pop and surf rock showed just how broad the punk scene stretches. Radio-friendly “oohs,” peppy drumbeats, and classic major-key chord progressions make for songs that at first blush may seem like closer cousins to bubblegum pop than punk rock. Then again, were The Ramones really so far from The Monkees? “I hate to blow the mystique,” Joey Ramone once told an interviewer, “but at the time we really liked bubblegum music.” (Ramone even went on to refer to the “Hey! Ho! Let’s go!” chant from “Blitzkrieg Bop” as “our version” of “S-A-T-U-R-D-A-Y! Hey!” from the chart-topping teenage pop song “Saturday Night.”)

The return to pop-punk roots is paying off for the Seattle rockers. A sold-out room greeted Tacocat on Friday, with an age-diverse audience that speaks to the band’s generation-spanning appeal. It turns out whether you grew up in the heyday of The Ramones or just found them digging through your parents’ record collection, that original formula of sixties pop with distortion and rebellious lyrics still packs a punch.

In particular, the early Beach Boys influence shines through and gives Tacocat some of their strongest material; “Bridge to Hawaii,” “I Love Seattle,” and “Crimson Wave”—the latter two which closed out Friday’s set—all bottle that summer fun-in-the-sun vibe and sprinkle in a little punk edge with top-notch results. When not in the beachy mood, the band makes room for guitarist Eric Randall to take a bigger role, incorporating a sort of Foo Fighters brand of hooky rhythm lines.  The opening riff of “Talk” and the descending guitar break on Friday’s encore “I Hate the Weekend,” for example, effectively draw in nineties pop-punk elements before darting back into the retro feel. Still, it’s the sarcasm and cheery middle finger to patriarchy in singer Emily Nokes’ voice and lyrics that most make this band stand out. Nokes delivered the lyrics to “Hey Girl,” a sharp commentary on street harassment, with just the sort of brash and sneering attitude misogynists deserve: “Who do you think you are? / Yelling at me from your car? / . . . / I was on my way to work. / You’re just a sweaty jerk.” If punk is about rebellion, nothing’s more punk than getting mad, staying mad, and refusing to put up with the status quo of harassment and “locker room talk” in the highest echelons of society in 2018. Lucky for us, Tacocat is out there inspiring a feminist punk movement to stand up and fight back, and with catchy songs to boot.

4. Good At Being Bad