The LSD Tour: Country and Folk With A Twist 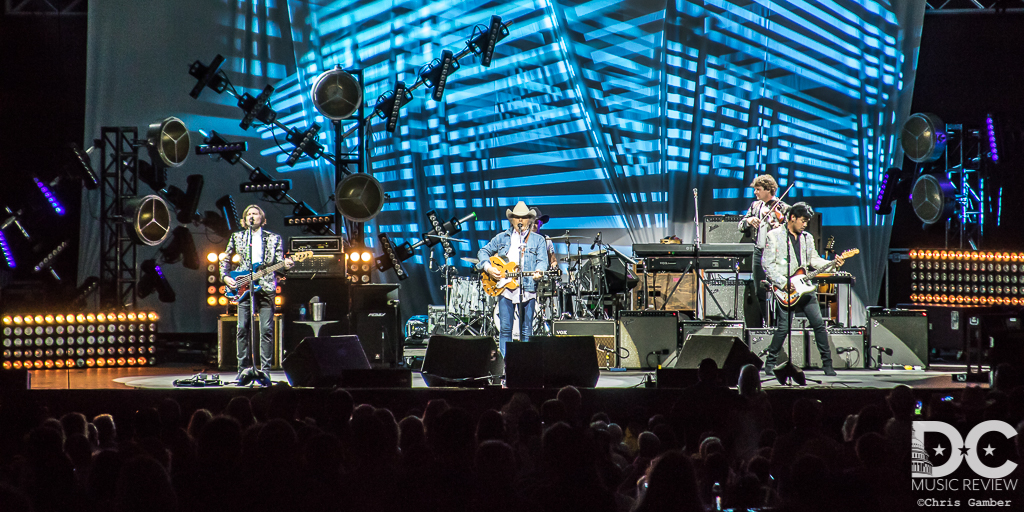 Three of America’s great country and folk singer-songwriters rolled through Baltimore and rocked the MECU Pavilion (formerly Pier 6 Pavilion) stage on June 19. Despite the humidity and sweltering heat that comes with a Baltimore City summer, concert goers delighted in the evening’s four-band LSD Tour line-up that included included King Leg, Steve Earle and the Dukes’, Lucinda Williams and Dwight Yoakam. Fans enjoying Steve Earle and The Dukes from the lawn

The evening started early with the bright sun that shone into the pavilion and the venue’s lawn as the official tour opener, King Leg took the stage. The five-piece big-country band shared their heavy-rock and smooth country sound mixed with mid-century musical influential sounds coming from the Beach Boys and Dwight Yoakam. The crowd seemed pleased to have the band for an opener as the audience clapped along to the rhythms.

The tour’s full audience slowly trickled as the sun set over the venue that sits along the Baltimore Harbor just in time for Steve Earle and the Dukes’ set. The six-piece band opened with a slow country song equipped with a fiddle, three electric guitars, a slide guitar and drums. The musical speed changed with the song, “Devil’s Got Me,” which he prefaced with left-leaning political empowerment to which most of the crowd roared and rose to sway and clap along. Following that number, Earle introduced a tune originally recorded with Del McCoury in the 1990s where Earle played the harmonica, showcasing the band’s versatility, from country rock to bluegrass rhythms. Right as the song ended, the crowd grew loud with cheers and stood in Lucinda Williams’ honor as she smoothly walked on stage to sing alongside Earle for one of his classic tunes. The crowd shared applause and cheers for Williams as she walked off stage and the band lead into “Galway Girl,” a crowd favorite that included mandolin and accordion. The song added to the audience’s growing energy as Earle moved into “Copperhead Road.” To add to the band’s versatility and the crowd’s excitement, the highlight of Earle’s set was the band’s end with a gnarly and energetic rendition of Jimi Hendrix’s “Hey Joe,” where infinite jam held the audience standing and swaying in awe. Earle’s supporting guitarist lead the song’s riveting jams that gave the audience chills. At one point Earle’s guitarist shred so hard and with gumption that he broke a guitar string and still continued to shred until the very end when the audience awaited the group with thanks and applause. Steve Earle and The Dukes

The hot day turned into a cool night as Lucinda Williams moved on stage with her four-piece band including bass, electric guitar, drums and her alternation between electric and acoustic guitars.

Williams’ set opener was slow and showcased her powerful voice and eclectic and ultra cool-country sound. As the set continued the energy and momentum of her songs grew livening up the crowd. Williams played “Drunken Angel,” which the crowd was very excited for, especially when Earle came to sit in for a soulful harmonica solo and addition. When the two shared the stage, magic came over the crowd as the history between Williams and Earle became apparent. Earle produced Williams’ record, “Wheels on a Gravel Road,” and afterwards the alternative-country act grew in popularity for her unique mysterious voodoo voice, New Orleans country sound and All-American Western tone. Earle left the stage and Williams and her band moved into “Bitter Memory.” The crowd cheered for the song and Williams’ exuberant coolness that was better than a cold brew on a hot summer night.

Williams’ supporting guitarist played delicious wholesome rips for her hit song, “Change the Locks,” which included heavy rock tones. The highlight of Williams’ set was the set ender where Williams lead a politically charged rendition of her hit song, “Joy,” that got most of the crowd up and moving. Earle joined in once again with Williams and her band who took the songs energy to another level by creating a great living wall of jammy sound that spilled into the audience that grinned and grooved. When Yoakam and his band finally took the stage, the crowd stood and roared. Yoakam has diehard fans who go crazy for his extraordinarily unique stage energy and presence. Yoakam dressed to the nines in typical cowboy style with cowboy boots, tight denim jeans and a denim sequin-studded jacket all topped with a tall gallon cowboy hat and rad electric and acoustic guitar to match. His three-piece band looked just as swanky in formal country and western sequin-studded blazers and pants. Yoakam is an experience that takes the audience back to a time when country and western performers were as glitz and glam as the stars.

The crowd went wild with cheers and adoration for the swing-country star’s big-south-twang and Elvis-like feel as he lead the crowd through melodic country sounds. Yoakam and his band played a new number with a fiddle part, called “Hard Love,” which in good humor, they had to restart. Yoakam pulled out his fancy footwork to shimmy across the stage and charm his fans who hollered from a distance. Following that song, the act played “Honky Tonk Man,” where the supporting guitarist switched from electric guitar, to mandolin and then back again. During the same song, the keyboardist played with one hand and with a fiddle in the other. Most of the crowd stood or boogied on foot for the entire set, egging Yoakam and his band to give them the works, which he did in high honky-tonk style.

The first leg of the 18-stop LSD Tour ended on June 21 and the second leg will continue on August 1 as the country and folk greats continue to impress the rest of North America with good times sure to be ahead.