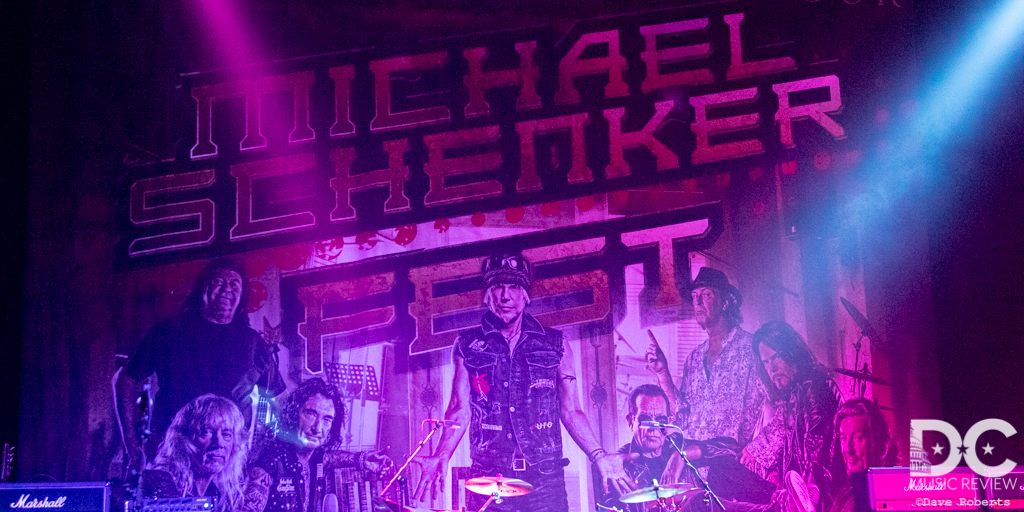 The Michael Schenker Fest came through Baltimore via Rams Head Live on Tuesday, May 14, and let me say flat out that they left a hefty wake of rock-and-roll music that amazed my musical taste buds to the hilt.  Armed with a super-talented band of musicians and four different singers that span Schenker’s lenghty career, the boys held nothing back as they tore through over 30 songs that clocked in just shy of three hours of non-stop playing.

It’s difficult to figure out a good starting point to describe the impact that Michael has had on the development of the hard-rock music scene dating back to his early days with UfO, as well as a member and early contributor to a young and developing Scorpions.

Starting the show was Michael sharing about the passing of his recent drummer, Ted McKenna, and keyboardist/guitarist Paul Raymond from UFO and MSG. He sincerely  expressed his gratitude and love for his dear friends, telling them he would see them again in heaven. He then spun into a delicious, crowd sing-along “Holiday” while taking on the vocals himself.

Talking about his contributions with the Scorpions, more directly about his older brother Rudolf, Michael jokingly referred to himself as a “pretty nice brother” for helping lead Rudolf in a direction that helped The Scorpions define early metal-music, as well as sharing his love and passion of the Flying-V guitar.  Schenker has his own line of Flying-V’s with Dean Guitars, and may I suggest to any guitar fan or collector that they are worth checking out because they are some of the coolest and most distinguishable guitars on the market.

Part of the Flying-V design has helped define Schenker's playing style.  While he steadies the guitar on his leg, this enables him to use vibrato with his left hand while hammering the heck out of his musical-machine.  This man is incredible to watch, almost with awe and disbelief which speaks to his ability as he has mastered his trade for going on 50 years.  At the age of 64, he seems to be having the time of his life because he doesn’t stop smiling the entire performance all while leaving nothing but traces of musical genius and prowess in his path. Guaranteed the band couldn’t fit one more song into their setlist without taking them over the three-hour mark.  As incredible as that is, you just don’t see that very often in a band’s repertoire of live shows.  Not only is it a long performance, it has got to be draining.  This is nothing short of a high-energy, rock-show full of onstage antics, solos, and raw enthusiasm.  Bassist Chris Glen took it upon himself to direct his own lighting  show wearing a pair of laser-light sunglasses that he beamed around the audience.

The music definitely highlighted the many facets that Schenker has been a part of throughout his career.  Included were a few Scorpion’s songs including the opener “Holiday” and “Coast to Coast” off of the career launching album Lovedrive (1979). The band definitely highlighted their new material from the Michael Schenker Fest, and also dug deep from the Michael Schenker Group (MSG), the McAuley Schenker Group, and of course the UFO catalog.

To say that the entire set was a highlight from the show would not be far reaching.  Experiencing Michael Schenker for the first time was a real treat, but to see the format of the different singers throughout the show was incredible.  Vocalists Gary Barden, Graham Bonnet, Robin McAuley, and Doogie White had such camaraderie on the stage, yet each singer brought a different sound and delivery to the show.  Each front-man had their time to shine with their own songs, but the cool part was when the boys shared the stage and each took turns collaborating on certain songs such as the heavy hitting “Warrior”.  None of them wanted to steal the spotlight, but you could definitely see the challenges that they were laying before each other as if to say, “Hey, top that”.

“Anytime” (1989) with Robin McAuley was very nostalgic taking me back to the days of MTV Headbangers Ball and the heyday of the power ballad.  “Heart and Soul” was easily the heaviest song of the night, completely full and punching with heavy drums and guitars, bass kicking you in the face, and another song led by all of the members of the singing quartet.  “Vigilante Man”, “Take me to the Church”, and “Lord of the Lost and Lonely” were knocked out of the park by the kilt-wearing Scotsman Doogie White.

You could tell the show was heating up to lead into a strong, blazing finish.  Saving his old UFO songs for the end, Schenker proceeded to play what I must say has got to be one of the best guitar solos I have ever seen, hands down.  “Rock Bottom” entranced the audience as Michael handled his flying-v with dominance and precision.  Standing in practically the same spot for nearly ten minutes, the focus that he put forth into what his hands and fingers were doing was very intense, all while the bass, drums, and keys were keeping the pace all so tight. Ouch!

Winding down the show with “Shoot Shoot”, “Natural Thing”, and “Lights Out”, this capped off an evening that was far superior than what I had imaginatively expected.  Guitarist/Keyboardist Steve Mann, Chris Glen on Bass, and newly added drummer Bodo Schopf taking over for Ted McKenna, were fantastic.  This group of highly seasoned players know they belong in this band with the highly-acclaimed guitarist Schenker, and make it obvious during the gig as they fervently help to rattle the roof of the Rams Head in Baltimore.

Michael Schenker Fest recently wrapped up their 2019 North American ‘Resurrection’ Tour in Austin, TX.  If you missed it, you’ll have to wait for it to come ‘round again.  In the meantime, there is plenty of Michael Schenker music out there to wet your whistles for the next tour.

Click here to see the setlist for Michael Schenker Fest at Rams Head Live on May 14, 2019