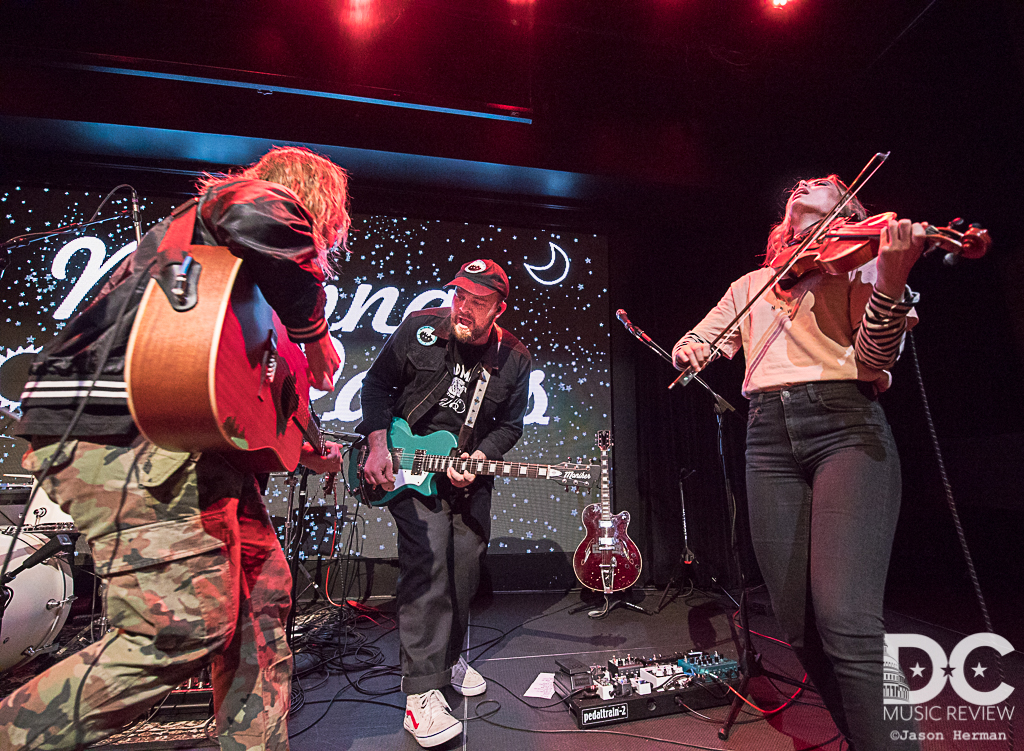 On March 16, The National Parks and Strange Familia performed at AMP Powered By Strathmore in Rockville, MD.

We were first introduced to The National Parks when opening band, Strange Familia, brought them onstage to perform one of their final songs, “Odes.” Throughout the night both bands were very transparent about their mutual loves for each other, with numerous mentions to how they were all best friends, and how touring with one another was an absolute “privilege.”

The optimism and camaraderie between the two bands was on full display displayed throughout the night. At several points during their performances the bands joined one another on the stage. In addition, both bands’ upbeat tunes fostered a warm and positive environment, leaving fans walking away grinning from ear to ear. Strange Familia are a hipster band at its finest at first sight, with their pink guitars and beanies stealing the show. Despite their bold sound and loud outfits, they had a modest stage presence, shyly introducing themselves. However, they were quick to kick off the night, inviting concertgoers to fill in the empty general admission pit. Recognizing that some may be unfamiliar with their music, lead vocalist Garret Williams modestly tacked on that they may have to work to “try and win over the crowd” first.

Strange Familia's set was short, but their opening performance would not be the last we saw of this band. They took turns lurking supportively in the crowd, peeking glances at their friends, The National Parks, and later even joining the band on stage for an encore performance. Following Strange Familia, The National Parks filtered into the venue, filing out one by one toward the stage. However, only two mounted, while the other three weaved their way through the throng of people pressed together in the pit, until, much to the delight of fans, a circle had formed around the members. Playing acoustically, the band kicked off their set with “Places,” an upbeat beachy tune. Recognizing the vocal intro immediately, fans joined in, belting the titular lyrics “places, places!” nearly drowning out the vocals of the band.

Comprised of Brady Parks (guitar and lead vocals), Sydney Macfarlane (keyboards and vocals), John Hancock (electric guitar and vocals), Cam Brannelly (drums), and Megan Taylor Parks (fiddle), the Utah based band have a loving relationship with the DMV area that was equally reciprocated by their fans.

The National Parks are a unique blend of indie-folk, with instrumental moments that reminded one of The Lumineers, Mumford and Sons, and at times, even U2 and Imagine Dragons, namely in the song “Stone’s Throw.” The fiddle flitting atop of the electronic elements of keyboard and heavy drums showed the diversity and range of the band. Megan Taylor Parks ferociously playing the fiddle. If you look very carefully you will notice Brady Parks, her husband, taking a moment to admire her performance.

Megan Taylor Parks ferociously playing the fiddle. If you look very carefully you will notice Brady Parks, her husband, taking a moment to admire her performance.

Throughout the night the band was able to engage and interact with the crowd, while still being entirely lost in their own world of sound. Watching Taylor-Parks jump and twist on beat, all the while still playing flawlessly was mesmerizing. It appeared as though Brady Parks, her husband, felt similarly, as he paused often, taking a moment to admire her musical talent.

“Monsters of the North” was a DC Music Review and fan favorite. From the opening notes, couples pressed closer together, while dance moves got bigger and more carefree, and  Parks and Taylor-Parks showed off their coordinated head banging. Their energy was contagious. The National Parks played their hearts out, thoroughly enjoying every note they made. Macfarlane on the keys was consistently met with rousing cheers and applause, for her powerful vocals were enough to move everyone in attendance.

While most of the night was an upbeat dance party, The National Parks took down the tempo for quieter songs like “Ghosts” and “Penny.” Brady Parks introduced “Ghosts” with a nod to their fans saying, “Thank you for being here tonight, for singing with us and smiling. You help remind us there’s still good in this world.” He added that, “the good is yet to come,” and that you can "leave your ghosts behind" before kicking off the nostalgic sounding track. The harmonies, fiddle, and Macfarlane’s solo in this song likely left many with chills, the song sticking with me for the rest of the evening. “Penny” was also a memorable moment toward the end of the set. After the other band members left Parks standing solo on stage, he introduced the new track as a breakup song, written for one particular person. He described performing such a private song publicly as surreal. His honesty and vulnerability added a new dimension to the song and the band. As he played, the crowd returned his vulnerability with the utmost respect, listening in utter silence.

At the end of the day, The National Parks are a fun, feel-good band. It’s impossible to see them perform and not walk away feeling rejuvenated and happy. Without a doubt, both bands brightened and redeemed my very gray Friday. With summer on the horizon, both The National Parks and Strange Familia would make a great addition to your warm-weather playlists, their upbeat and carefree tunes sure to leave an impression.

Ending the night with an overly gracious, “we can’t wait to come back!” Echoing their enthusiasm for the DMV, DC Music Review hopes both incredibly talented bands return to our area soon.

Click here to see the setlist for The National Parks' performance at AMP Powered By Strathmore on March 16, 2018

9. Monsters of The North