The PRS Experience – Much more than a guitar 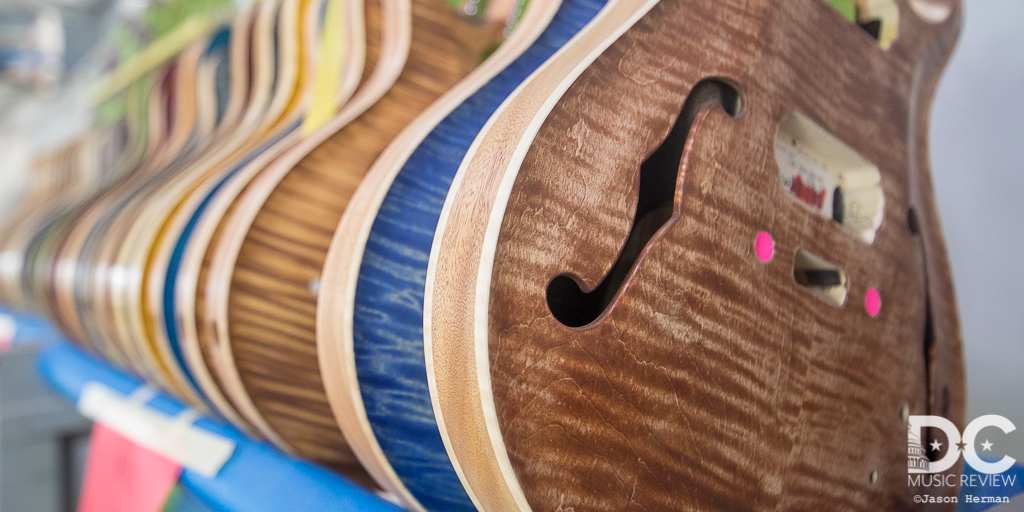 As a music lover, we watch musicians amaze, inspire, and move us on stage. As the guitarists and bassist move about the stage, you cannot help but notice their instrument and some of the unique characteristics of it. More and more you will see a bird inlay on the guitar neck of that guitar, especially throughout the DMV. That little bird is one of the signature marquee of Paul Reed Smith. Once you see this bird inlay, you start to notice other guitarists taking flight with their Paul Reed Smith instrument. This leads me to my love of John Mayer and for which I am not sure that I would be writing this today. This company is more than just a factory that produces some of the finest products in the musical industry, it is filled with an inordinate amount of quality and precision, passion, inspired artisans, master craftsmen, and all here in our own backyard just feet from the Chesapeake Bay. [Editor Note: Learn more about Paul Reed Smith's signature inlay here.] There are so many talented musicians that we see on stage throughout the musical landscape, from living rooms and garages, from small stage to national touring acts. There is one thing that unites these musicians - Paul Reed Smith Guitars, and amplifiers. So many of these musicians, especially John Mayer woke me up to one of the greatest guitar companies of our time as I saw that ever familiar inlay on his guitar. I know, that’s a broad statement and perhaps you might be like me and a bit skeptical of that thought, because I too was a skeptic, until I had the chance to witness the magic of the PRS Experience. “It’s just a guitar,” you may say. But oh my friend, PRS is so much more. It truly is an experience and it’s made right here in the DMV.

On June 9, just over the Chesapeake Bay Bridge, cars upon cars lined up outside of the PRS Factory in Queen Anne County, Maryland for the 9th annual Paul Reed Smith Experience where PRS guitar, bass and amp fans eagerly flocked towards the day’s event. Fans made the pilgrimage to the factory from around the area while others traveled halfway around the globe to make the pilgrimage to a address that was mythical & spirtitual in nature.

The day’s bright sun shone over white tents that sat strategically outside the factory in the parking lot. A cacophony of warm and sweet tones flew from the mouths of perfectly conditioned wooden guitars. In the distance, a man hosting a workshop underneath a tent fiddled on his guitar’s fret board. Over the microphone in front of him, he asked the audience, “Do you ever like to noodle around? Sometimes I do,” and before he tore into a short winding and bouncy jam he said, “I like to define noodles as a little slippery.” PRS fans try out any one of a number of guitars set out for them.

The event doors opened at 10:30 a.m. and throughout the day until about five p.m., activities such as factory tours, an interactive area to test drive PRS gear and clinics ensued, some of which instructed things like “Soloing anatomy: How to solo over chord changes with Tim Pierce,” and “‘Secret’ Habits of the pros: Instantly level-up your guitar playing with Dave Weiner.”

The factory doors opened wide to the fans where wood palettes held stacks and stocks of fresh cut wood, blank canvasses of quilted maple, curly maple and red cedar that sat behind a perimeter of vendors around the large stockroom.

PRS fans try out any one of a number of guitars set out for them.

Music stores from North Carolina to Baltimore showcased their finest stock of PRS inventory, ranging price from $1,000 to one very special guitar that was $18,999. “The Tree of Life,” it was called with a solid body and distinguishable inner tree markings varnished in jade green so shiny that you could see your truth in the guitar’s reflection and brassy gold hardware could lure you in from miles away. The guitar neck was varnished black and instead of the PRS signature of mother of pearl birds taking flight, the neck’s inlay was instead lotus flowers, that with just one look, or perhaps a hold, would make you feel enlightened. Inside the Paul Reed Smith Factory

The vendors guitars lead a winding path to the massive double workroom doors and with only stepping one foot inside, the scent of fresh cut wood wafted overhead.

Factory tours gave fans a chance to see behind the scenes of these artisan pieces. PRS employees, luthiers, lead adoring fans and newbies through the intricate and precise step by step process of creating a masterpiece. From the beginning process where the guitar body is chosen from the same cut of tree, where like a fingerprint, no two inner tree markings are alike and that is only one part of what makes each PRS guitar unique. [Editor Note: A Luthier is is someone who builds or repairs string instruments generally consisting of a neck and a sound box. A lutherie is the craft of making string instruments.]

Inside the Paul Reed Smith Factory

The tour winds through each of many stations of guitar production and at each station the guide provides the details and very thorough process of crafting each part of the guitar. Guides are knowledgable and open to all questions it is as though they want PRS fans to understand the guitar as well as they do. A workstation at Paul Reed Smith

At each section of the factory production, where there limited machinery and handwork is encouraged, the employees of each station are excited to talk to fellow fans who love the company as much as they do.

Perhaps one of the most initially appealing aspects of a PRS guitar are the unique assortment of varnishes that come in a sea of colors and requires a process as specific as the rest of production.

A workstation at Paul Reed Smith

The varnishing station smells of luxury and desire, more than anything toxic. There are only three luthiers in the painting station. Each is trained to paint one of three types of guitar, the hollow body, semi hollow body and solid body.

One luthier, now a professional, who has varnished PRS guitars for four years, has painted guitars for the famous such as Morgan Freeman. After working in the department so long, he now has the ability to come up with custom paint jobs on the fly. He spoke with passion and excitement in his voice, but he wasn’t the only one. Any PRS employee will express a genuine appreciation and gratitude for the guitars they make. One circuitry specialist has worked there for 11 years and said that Smith treats the employees well and doesn’t plan on leaving anytime soon.

The tour ended and by then, diehard PRS fans were drooling and most newbies were roped in, but for those outside the two categories there was still plenty of day left to sway the tastebuds of skeptics.

Outside the factory, the sky grew grey and Smith himself lead the event attendees to dryness in the shelter of the factory as people discussed which guitar they would be bringing home that evening. Several fans did buy that day and that was even before they heard the guitars sing. The skies opened, the rain stopped and employees, fans and attendees moved out of the factory and back to the main stage concert tent to grab their seats for the evenings’ performances that would showcase PRS gear.

In his introduction, Smith shared that it used to be the role of record companies to find new and upcoming musicians, but now he said, it was up to the music makers. When Smith hears a quality musician who is up and coming he chooses them for the PRS Experience and all were ripe for picking.

Magnolia Boulevard, a band from Kentucky began the evening’s lineup with a very groovy blues-jam based set that had people bopping around in their chairs.

Vertical Horizon, a four-piece alternative rock-band from Washington D.C. played a dynamic set that had people enthralled with their great stage energy. The audience was truly engaged when the band played a song that allowed the audience to sing their own chorus. All audience members smiled, some laughed and several took the chance to let their voices shine. The energy of everyone’s collective artistry helped the audience kick back and connect a little deeper with the PRS Experience. Prior to the Paul Reed Smith Band, Smith invited young performers on stage,  Boscoe France who played guitar next to Simon McBride. The two were a dynamite pair that riled up the audience with funny stage antics such as synchronized dance moves paired with primo musical talent. The evening’s highlight was when Smith sat in with the pair and added his flair that livened the crowd even more. At that moment it was clear that the fans love the guitars, but they really love Smith because he gives them an experience.

Two stories stand out in particular. One man said that he gave himself a cap of seven PRS guitars, which he already owned, and that if he wanted another he would have to sell one. We asked another attendeehow many PRS guitars they owned and they said it would be easier to say which guitars the didn't own rather than which ones they already owned.

PRS has dedicated fans and a cult following much like the Grateful Dead or Elvis or other great artists. That’s precisely what PRS is, an artisan of craft guitars. We hope PRS Guitars and their employees continue to inspire their fans and the fans yet to come. We are sincerely proud of the craftsmanship and artistry that comes from our beloved region.