The Rolling Stones – No Filter Tour comes to FedEx Field 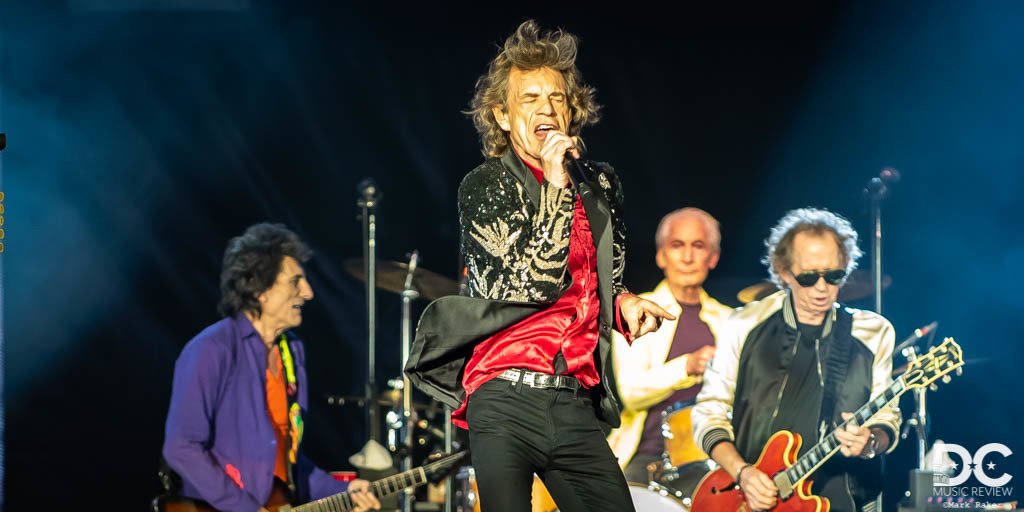 On Wednesday, July 3 – ushering in the Independence holiday weekend, The Rolling Stones took the DMV by storm at FedEx Field. They began two weeks ago with two opening shows in Chicago, hit their lone Canadian stop in Ontario, and played to an exuberant 40,000+ fans at Redskins Stadium. They'll span the country several times before finishing the tour in Miami in late August. Put aside all joking about this being a geriatric wheelchair tour - this was a no-holds barred performance, the third North American city on the current "No Filter Tour". All night,  Mick Jagger crisscrossed the massive stage, from broad wing to wing and down the runway to center field. The rest of the band also kept pace, and included Keith Richards, 75, Charlie Watts, 78, Ronnie Wood, 72. Jagger, defied his own 75 years of age, and rarely looked like someone thatrecently had heart surgery. The show opened with the Pittsburgh-based Ghost Hounds, as every show on the tour is featuring a different near-local support band. While highly popular, and an energetic performance the restless crowd could hardly wait for the main act show time, and after a full day of tailgating, grew even louder as the Stones took the stage, barely two minutes after the scheduled start. The large crowd included fans from across the generations, including many seeing the superstars for the first time. The twenty song-filled evening was a no-disappointment tour through the band's legacy of great hits, and opened with "Jumpin' Jack Flash" and rolled right into "It's Only Rock 'n' Roll (But I Like It)".  That was a great setup as just a few songs later, they broke out "Mercy, Mercy", the Don Covay cover not played by the band for 50 years. They followed that with "Rocks Off", the fan voted song. Each show includes a song chosen by popular vote. Midway through the long set, The Stones moved out to the end of the long runway and treated the FedEx crowd to two acoustic hits, "Angie" and "Let It Bleed".  The second half of the show picked up even more steam and energy,  right through "Brown Sugar".  A strong double encore of "Gimme Shelter" and "(I Can't Get No) Satisfaction" included a brief fireworks display to close the night.

Click here to see the setlist for The Rolling Ston'es performance at Fedex Field on July 3, 2019

The No Filter tour hits Washington, DC tonight! See you all at FedExField later and look out for the city specific merch available at the show & on our US store: therollingstonesshop.com The song vote had an overwhelming majority, a landslide win we've never seen before!! Guess you really want to hear this one live again...find out which track later

Washington you got your Rocks Off!! Thank you